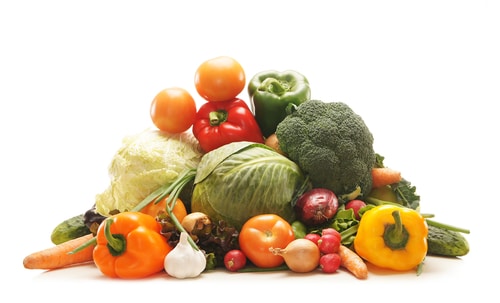 There are some benefits to munching on raw foods since raw foodies are more likely to eat fruits and vegetables. Some people are adding more raw foods to their diet in hopes it will help them lose body fat. Are there benefits to eating a raw food diet if you’re trying to lose weight?

There is some evidence that adding more raw foods to your diet can help you shed body fat. Studies show people who eat predominantly raw food diets eat fewer calories overall. This is partially due to the composition of the diet most raw foodies eat. They tend to eat more low-calorie foods like vegetables. Since they’re not cooking their vegetables, they’re enjoying them without butter or high-calorie sauces.

One study showed mice that ate a raw food diet lost more weight than those that ate a diet of cooked foods even when they eat more total calories. The reason for this isn’t entirely clear. One explanation is that your body expends less energy digesting food that’s been heated since cooking breaks some of the bonds, making it easier to digest. In other words, you burn more calories digesting raw foods. You also expend a little more energy chewing them too.

Another intriguing study looking at raw foods and weight loss found that mice fed a compound called methylglyoxal gained body weight, especially in their mid-section – the dreaded belly fat. Methylglyoxal is a type of AGE or glycation end product, a compound formed when foods are exposed to heat through grilling, baking, broiling or roasting. AGEs are linked with inflammation, premature aging and an increased risk of diseases like heart disease and type 2- diabetes.

Grilled chicken and beef produce other harmful compounds called heterocyclic amines and hydrocarbons are linked with cancer. Plant-based foods that contain natural sugars and an amino acid called asparagine, like potatoes and grains, form harmful compounds called acrylamides when they’re heated to high temperatures in the absence of water – like frying, roasting, grilling or baking. Adding more raw foods to your diet reduces your exposure to these harmful compounds and, if this study holds true in humans, helps to keep belly fat in check.

Raw versus Cooked Foods: Are There Nutritional Differences?

Some vitamins, especially antioxidant vitamins like A, C, and E, are partially inactivated by heat. These vitamins are antioxidants that protect cells against free radical damage – so chalk one up for raw foods. On the other hand, your body can better use some nutrients like lycopenes and carotenoids when the foods that contain them have been heated. An example is the lycopenes in tomatoes. You get the most benefits by eating spaghetti sauce or salsa where the tomatoes have been cooked or processed.

One study found that people who followed a strict raw food diet had lower levels of lycopenes in their bloodstream. That’s important since lycopenes have been linked with a reduced risk of heart disease and some types of cancer. Carrots are another vegetable that is best enjoyed heated. Cooking carrots increase the bioavailability of their carotenoids like beta-carotene.

Some Foods You Shouldn’t Eat Raw

Some foods can be toxic if you eat them raw. Examples are raw kidney beans, peas, parsnips, and apricot kernels. Raw milk, eggs, and meat can harbor bacteria that lead to food poisoning. Some vegetables, especially cruciferous ones, contain goitrogens that block the production of thyroid hormone. Plus, greens like spinach contain oxalic acid, a compound that blocks the absorption of some minerals like iron and calcium. Oxalates can also combine with calcium to form kidney stones.

Adding raw foods to your diet may have some benefit when it comes to losing body fat, especially if you eat more fruits and vegetables. You also reduce your exposure to some unhealthy compounds formed when food is exposed to high heat. On the other hand, some raw veggies have compounds that affect mineral absorption and thyroid function. You don’t want that if you’re trying to lose weight. You’ll also get fewer lycopenes in your diet if you eat a mostly raw food diet.

The best solution? Add raw foods to your diet, especially fruits and vegetables, but don’t completely eliminate cooked foods either. When cooking meats don’t use dry heat and if you expose them to high heat, use an acidic marinade. This reduces the formation of heterocyclic amines. Eat your tomatoes in foods that have been heated, but enjoy cruciferous vegetables and greens that contain oxalates steamed or sautéed.

The good news? You can get the benefits of both worlds – raw foods and cooked foods. Why not enjoy both?

Scientific American. “Fact or Fiction: Raw veggies are healthier than cooked ones”

4 Reasons to Add More Raw Foods to Your Diet

6 Foods You Should Always Cook

6 thoughts on “Can a Raw Food Diet Help You Lose Weight?”