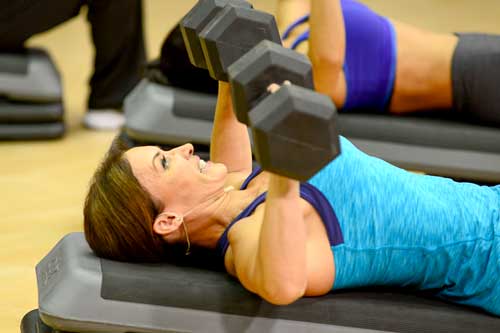 Can’t remember where you left the car keys or your to-do list? Having a super memory comes in handy when you’re busy and have lots to remember. Could your memory use a tune-up? Skip the brain games and puzzles and grab a pair of weights or resistance bands instead. A new study carried out by researchers at Georgia Institute of Technology found resistance training has a surprising advantage — it jumpstarts your brain and you don’t have to do it very long to get the benefits.

Is Resistance Training a Memory Booster?

Much emphasis has been placed on aerobic training for maintaining brain health. Not that aerobic exercise doesn’t benefit your brain, but resistance training may have similar benefits for the brain, especially when it comes to your memory.

Researchers divided 46 men and women into two groups.  They showed each group a variety of pictures. Some of the photos were uplifting photos that elicited a positive emotional response. Others were negative or neutral. After viewing the photos, one group did fifty repetitions of leg extension using resistance and maximal effort. The other group did “passive” leg extensions where the machine did all the work.

Two days later, researchers asked both groups to pick out which photos they had seen previously as a memory test. Both groups were better at identifying positive and negative images compared to the neutral ones, but the group who resistance trained was able to recall significantly more total images compared to the group that didn’t do leg extensions against resistance.

You may wonder why resistance training would have a memory-boosting effect. It may have to do with the short-term stress of resistance training. When researchers took saliva samples from both groups, the group who did leg extensions had higher levels of an enzyme called alpha-amylase in the saliva.  Alpha-amylase is a marker for a hormone called norepinephrine which adrenal glands release in response to stress.

Resistance training is a form of stress, albeit a good one. As such, your adrenal glands release more norepinephrine when you do a resistance workout. Research shows norepinephrine is important for memory retrieval, especially emotionally charged memories. That’s why study participants could better remember positive and negative images as opposed to neutral ones. Resistance training seems to help access memories stored in your brain. This comes in handy when you’re trying to remember someone’s name at a party.

Research shows aerobic exercise increases the volume of the hippocampus, a portion of the brain involved in processing memories.  We lose a certain amount of brain tissue as we age. Aerobic exercise reduces this loss and improves the symptoms of mild cognitive impairment; memory problems that are worse than average but not bad enough to meet the criteria for dementia.

One study published in the journal Neuroscience looked at the effects of aerobic and resistance training on memory in rodents. Rats that did aerobic training and those that did resistance training both experienced improvements in memory and learning. Both forms of training were effective although they exerted their benefits via different pathways. You probably already knew aerobic exercise is good for your brain, but now you can add resistance training to the list of brain-healthy habits.

Considering resistance training improves recall, based on this latest study, it’s not a stretch to say working out with weights or resistance bands might be a grade booster for college students. There’s evidence to support this. In one study, a group of men were asked to learn a new task on a computer. Some of the men exercised beforehand. Another group exercised after learning the task and the third did no exercise at all.

When they tested how skillful the men were at completing the task, the two groups that exercised performed better than the group that didn’t. The men who did the best were those who exercised AFTER learning the new skill. Exercising after learning a new task may be beneficial for retention of that skill. Interestingly, research shows kids who play sports or exercise perform better academically.

Add memory skills to the list of benefits that resistance training offers. As you strengthen your muscles and build bone mass, you’re giving your brain a workout too. Best of all, even 20 minutes of resistance training seems to improve memory recall. Can exercise lower your risk of dementia too?

A 2013 study showed five behaviors are linked with a lower risk for dementia: not smoking, maintaining a healthy body weight, eating a healthy diet, not drinking too much alcohol and regular exercise.  What type of “healthy” diet is best? A number of studies support the benefits of a Mediterranean diet, a diet rich in fruits, vegetables, nuts, olive oil fish and moderate amounts of whole grains, for maximizing brain health. Whatever you do, choose your diet wisely and keep exercising!

Peak Fitness. “Strength Training Can Boost Your Long-Term Memory and Lower Your Risk of Dementia” (October 2014)