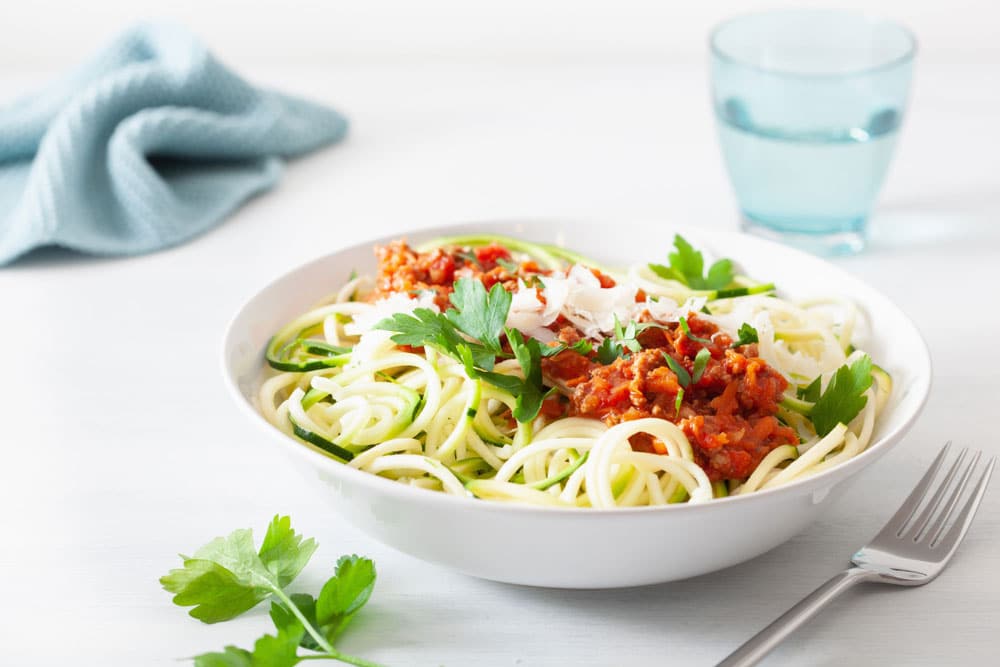 Most of the pasta that comes in shapes like linguine, fusilli, fettuccine, and pappardelle, is made of durum wheat flour. To make pasta in these popular shapes, manufacturers add eggs and water to convert durum wheat flour to dough. Then, they push the dough through an extruder with a die that shapes the pasta into the desired shape. From there, the dried pasta goes into boxes where you buy it and use it to make your favorite Italian dishes.

Why are pasta alternatives occupying more grocery store shelf space these days? It’s the emphasis on health! Wheat-based pasta gets a bad rap, and there’s the perception that eating too much pasta will make you fat and diabetic. Traditional pasta isn’t very nutrient-dense, and it’s high in carbs that your body absorbs quickly. Loading up on a plate of pasta lead to a rapid rise in blood sugar that isn’t healthy for the waistline or for metabolic health. Plus, eating starchy foods, like pasta, in place of nutrient-dense vegetables does little to enhance the health of your diet.

So, eating pasta made with veggies or beans sounds appealing, but how healthy are these pasta alternatives?

Makers of veggie-based pastas give the impression that eating their product will give you a full serving of vegetables. However, that’s not always the case. Some vegetable pasta brands are made mostly of durum wheat flour and contain only a small amount of added vegetable matter and the added veggies may only be ground vegetable powder. The amount of actual vegetable matter in an alternative pasta varies widely.

Avoid being fooled!  If you buy one of these pastas, read the label and see how much you’d have to eat to get a full serving of vegetables. Chances are, you must eat a fair number of calories to get a veggie serving when you could have gotten that serving of vegetables and consumed fewer calories by eating the vegetable itself. Plus, pasta alternatives made with wheat flour and added vegetable powder is often lower in fiber than eating the vegetables themselves.

How can you tell whether vegetable pasta has enough vegetables to upgrade your diet? Read the label. You would expect vegetables to be near the top of the ingredient list. The same goes for bean and legume-based pasta. You should see beans or bean flour among the first few ingredients.

Veggie pasta isn’t the only pasta alternative competing for your attention at the grocery store. You can also load up your shopping cart with pasta that contains chickpeas, beans, lentils, or even edamame. The upside of bean and legume pasta over traditional wheat-based pasta without beans or legumes is the added protein they contain. Most have more protein than you’ll get from pasta made of wheat flour. That’s an advantage because the protein will fill you up faster and you’ll eat less. Protein helps you stay satiated too. Plus, some darkly colored beans are high in compounds with antioxidant and anti-inflammatory benefits.

Protein isn’t the only upside. These pastas also pack a fiber punch, as beans and lentils are an excellent source of fiber. One chickpea-based pasta has almost 4X the fiber of traditional, wheat pasta and 2X the protein. Plus, it’s lower in carbs. That’s a sweet deal if you aren’t willing to give up pasta entirely.

Vegetable and legume-based pasta may contain other additives. Just because it contains a small quantity of vegetables doesn’t mean it’s healthful for you. Vegetable-based pasta with only a little vegetable powder to give it color is still high in carbs and not the waistline-friendly. However, there is one alternative low in carbs and high in vegetable content. It’s zoodles and other types of pure vegetable noodles.

You might be familiar with zoodles or zucchini noodles. Unlike commercial veggie pasta that contains more durum wheat dough than vegetables, zoodles and variations on zoodles are pure veggies. For example, a zoodle is zucchini transformed by a spiralizer into a noodle. However, you can spiralize a number of vegetables and turn them into all-veg noodles.

Some vegetables you can spiralize include beets, cabbage, carrots, cucumbers, jicama, turnips, sweet potatoes, onions, butternut squash, bell peppers, and radishes. These are all nutrient-dense veggies high in fiber and low in calories. How do you do it? Buy an inexpensive spiralizer that will do the job for you quickly. Some grocery stores even sell vegetables that are already spiralized. These are the best choice if you’re trying to increase the vegetable content of your diet and they’re the most blood sugar friendly.

The quantity of vegetables in packaged pasta alternatives is variable. Some contain only a small amount of vegetables, just enough to give the pasta color. Don’t judge the content of the box by the tint. some pasta manufacturers add a spice like turmeric to color the pasta orange so it looks like it’s loaded with carrots! For many pasta alternatives, you’d have to eat a fair amount of pasta to get a real serving of vegetables. That’s why spiralized vegetables are the healthiest option. However, legume-based pasta, like chickpea pasta, is high in plant-based protein and fiber. Therefore, it’s a good choice if you don’t want to use spiralized vegetables. Whichever one you choose, be sure to add lots of yummy vegetables to your pasta dish and some anti-inflammatory spices too.

Pastas Make You Fat – or Do They?

5 Whole Grains That Are Easy on Your Blood Sugar

Are Whole Grains Good or Bad for Your Gut and for Your Health?

One thought on “Are Vegetable-Based Pastas as Healthy as They Sound?”