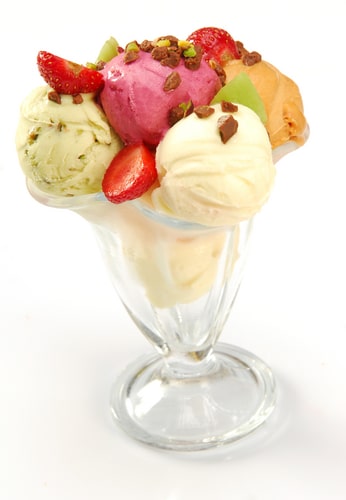 What would life be without occasional splurges or indulgence? Eating something high in calories once in a while can actually make it easier to stick with a healthy eating plan as long as you don’t make it a daily habit. According to research carried out at the National Institute of Health, occasional high-calorie indulgences are unlikely to lead to weight gain since your body compensates for day to day calorie fluctuations. In other words, your body makes “adjustments” when you hit it with an occasional high-calorie treat. If you splurge on a 600-calorie piece of cheesecake, you’ll compensate later by eating less and moving around more. Still, there are “sensible” ways to splurge that make it even less likely it will impact your waistline. Here are some tips for splurging smarter:

Instead of indulging in an ice cream sundae swimming in chocolate syrup and whipped cream, splurge smart by eating a healthier version of a banana split. Cut a banana and place it in a bowl. Top it with low-calorie frozen yogurt or lower calorie ice cream. Sprinkle on nuts and cocoa powder in place of chocolate syrup for a less decadent but still satisfying splurge. Remind yourself that bananas are a good source of vitamin B6 and nuts and cocoa powder contains antioxidants that may lower the risk of heart disease – so all is not lost.

Another option is to melt bittersweet chocolate chips in a saucepan and dip chunks of banana into the melted chocolate. Sprinkle with nuts and freeze for a decadent but not high-calorie treat. There are lots of ways to modify high-calorie indulgences to reduce the sugar and calories without forgoing the pleasure of eating it.

If you’re craving a high-calorie milkshake or smoothie, limit the calorie damage and still satisfy your craving by whipping up a smoothie in your blender at home. For example, Burger King’s Tropical Mango Smoothie has 85 grams of sugar. That’s enough sugar for a few splurges. You can do much better at home using fresh fruit and yogurt. When you indulge at a restaurant or fast-food place, you usually consume 30 to 50% more calories than you would making it yourself.

Don’t get greedy and eat a second piece of chocolate cake. Slow down when splurging so you can really enjoy the taste. If you eat a splurge “mindfully,” you’ll be satisfied with a smaller portion size. Choose a small plate and spoon out a reasonable portion and put the rest away so you won’t be tempted to reach for seconds. If you’re splurging on French fries, get a small order or share them with someone. You’ll still get the taste but not the 500+ calories in a large order.

Another Way to Modify a Splurges

If you’re craving a piece of pie, eat the filling and leave the crust behind, especially the thick outer crust. You’ll shave off a significant number of calories and carbs. Same with pizza, leave behind the thick, carb-loaded piece of crust on the tip. It’s hard and has very little taste anyway. Have a hankering for a cheeseburger? Order it bunless instead.

Add Some Nutritional Benefit to Your Splurges

If you’re craving a dish of ice cream, enjoy it with a healthy fruit like blueberries or strawberries. That way you’ll eat less of the ice cream and get some health benefits as well.

Don’t splurge on impulse. It’s tempting to do that when you’re with a crowd and everyone is ordering dessert. Only splurge on something you really love. A splurge should feel special and definitely be something you enjoy the taste of. Before a splurge, give yourself time to mentally prepare and anticipate it. It’ll be more pleasurable – and you’ll “get it out of your system.”

There’s nothing wrong with occasional splurges, but it’s even better to splurge smarter. Keep these tips in mind when planning your next indulgence.

Daily Weight Changes: Why Does Your Weight Vary So Much?

How Bad for Your Weight is an Occasional Splurge?