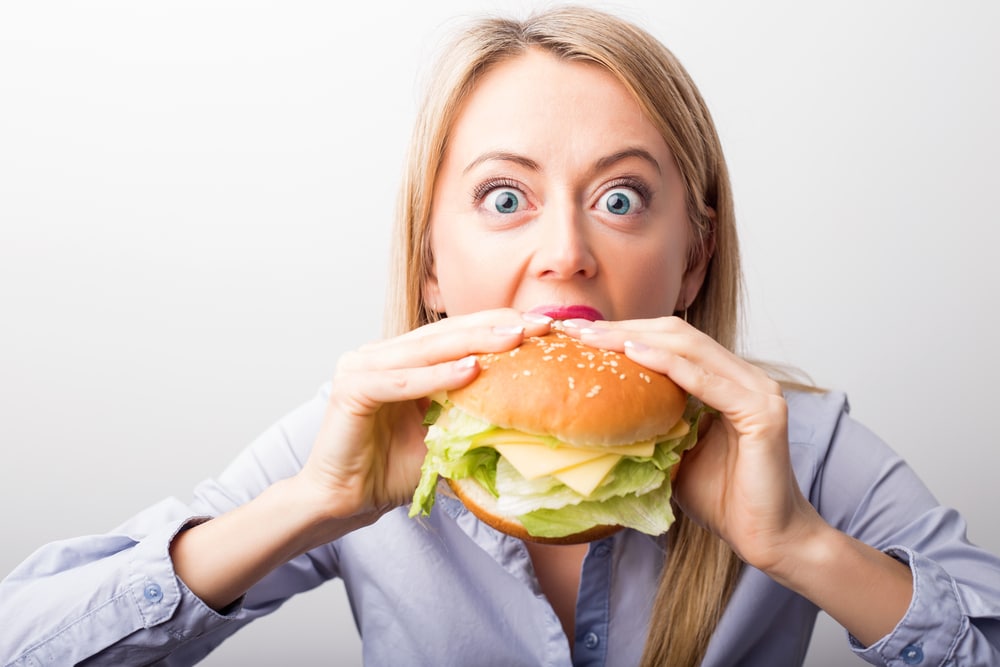 It’s clear that overeating, eating the wrong foods, and being sedentary contributes to weight gain. It all goes back to the old “calorie in vs. calorie out” model, a model that many experts believe is oversimplified and that the type of calories we take in matters as well. For many people, stress can trigger weight gain too. How stress triggers weight gain is a bit more complicated. In fact, there are five ways chronic, psychological stress can make it harder to control your weight.

One contributor to stress-related weight gain is a phenomenon called catecholamine resistance. Catecholamines are compounds your body releases in response to stress, all types of stress, both mental and physical. You’ve probably heard of two catecholamines, adrenaline, and noradrenaline, the so-called “fight or flight” chemicals. It’s these compounds that help you mobilize energy stores when you’re in a crisis situation, e.g., a tiger is chasing you. You also release more of these chemicals when you’re under chronic, mental stress. Not surprisingly, anxious people tend to have higher levels than calm, placid individuals.

In an acute situation, the release of adrenaline and noradrenaline mobilizes energy stores, including fat. Short-term they cause fat breakdown, so you can oxidize those fats for fuel. But what if you’re constantly producing higher levels of these fight or flight chemicals? Just as with insulin and leptin, the receptors in your body can become resistant to them and stop responding. That’s a problem because you also release adrenaline and noradrenaline when you exercise. The release of these catecholamines helps with fat mobilization so you can burn it as fuel. If you’re resistant, you don’t mobilize fat as easily when you release these hormones. So, chronic stress can make it more difficult to burn fat when you exercise.

Cortisol is another major player in the stress arena. You release this hormone from your adrenal glands in response to stress of any type, including when you exercise. Short, more intense workouts and resistance training are associated with cortisol release as well, but with intense exercise, you also get the release of other hormones, like growth hormone and testosterone. These anabolic hormones balance the impact of cortisol. When cortisol is not balanced, it can trigger fat storage, particularly around the waist and abdominal region.

Unfortunately, mental stress can lead to a sustained rise in cortisol. Along with fat storage, long term release of cortisol can trigger inflammation, another contributor to weight gain. Plus, chronically elevated cortisol and inflammation can lead to insulin resistance and a high insulin level. That’s a negative since insulin is a fat storage hormone and high levels contribute to weight gain and obesity. So, stress can trigger a vicious cycle of cortisol release and elevated insulin followed by fat storage.

Appetite control can also go awry when you’re under chronic stress. When we’re stressed out, we sometimes self-medicate by eating comfort foods, foods that are familiar and comforting but are usually high in sugar and fat. We tend to crave the familiar when we’re stressed. These foods may bring back memories of childhood when things were safe. Sugary foods also activate the reward centers in the brain and give a brief boost in mood. If you’re stressed, you’re also less likely to go the extra mile and cook a healthy meal. It’s easier to grab quick, packaged foods and junk food.

Psychological Stress: The Effects of Betatrophin

You might not be familiar with betatrophin but it’s a protein released in response to stress. Though results are preliminary, research carried out at UF College of Medicine shows that the liver and fat tissue of mice make more betatrophin in response to stress. Under the influence of this protein, fat metabolism slows and that, in turn, can lead to weight gain. In fact, betatrophin blocks the activity of an enzyme involved in fat metabolism. More research is needed to clarify the precise role betatrophin plays in weight gain and whether it interacts with cortisol and other stress hormones as well.

When you’re chronically stressed, you’re more likely to lie awake at night and worry. When the amount of sleep you get or the quality of that sleep drops, it triggers cortisol release. Along with the rise in cortisol, you also get dysregulation of appetite hormones, particularly leptin and ghrelin. Leptin is the hormone produced by fat cells that tell your brain that you’re full. Ghrelin has the opposite effect, it signals your brain that you’re hungry and need to eat. Studies show that lack of sleep increases ghrelin and reduces leptin – and that strikes a double blow to your already overactive appetite. You crave carbs because cortisol is elevated and your appetite hormones are imbalanced and stress reduces your willpower and makes it harder to resist their calling.

Obviously, stress is an important part of the weight control equation and it’s something we don’t always adequately address. Taming the stress tiger could be the missing link when people exercise and eat a healthy diet, yet can’t seem to lose weight. When faced with the inability to lose weight, some people increase their exercise more and further cut back on calories. That’s the wrong approach if stress is playing a role. The key is to identify when stress is an issue and address it.

Of course, it’s not possible to control every aspect of life and there’s some stress no matter what you do. Yet, it’s important to have a way to blunt its impact on your body. One approach to consider is mindfulness meditation. Research shows that this type of meditation activates portions of the brain involved in regulating emotions. One such area of the brain is the anterior cingulate cortex, a portion that governs thoughts and emotions. With mindfulness meditation, you focus on the present moment rather than allowing your mind to drift into thoughts that bring on stress. You also learn to control your reactions to stress. Exercise, too, is a stress reliever when you do it in moderation. Find what works for you and do it – because stress is harmful to your health and your body composition.

6 Surprising Reasons You Gain Weight in the Winter

How Meditation Can Help You with Weight Training

How Mindfulness Meditation Can Help You with Weight Training