4 Hormones That Impact Your Ability to Build Muscle

4 Hormones That Impact Your Ability to Build Muscle 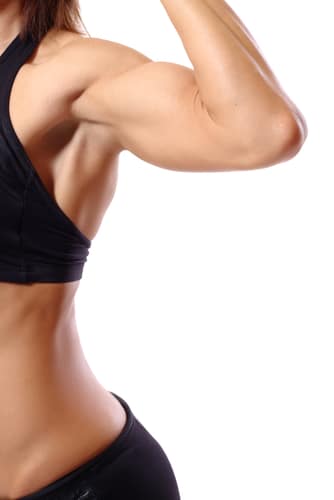 When you do resistance exercise to build lean body mass you overload the muscle in a way that causes it to hypertrophy or become larger over time. In response to this progressive overload, the individual muscle fibers become larger in size. Muscles grow primarily by an increase in fiber size, by accumulating more contractile proteins, rather than an increase in muscle fiber number. Of course, there’s a lot going on behind the scenes you may not be aware of. A number of hormones are at work that can enhance or interfere with your ability to build muscle. Here are some hormones should know about.

When you progressively overload your muscles through training, levels of a hormone called IGF-1 or insulin-like growth factor, produced by your liver, goes up. When IGF-1 levels rise in response to training, it stimulates protein synthesis and activates satellite cells that are important for muscle cell growth. Satellite cells are cells that are normally inactive unless you damage your muscles or expose them to stress. When muscle is stressed or damaged, satellite cells increase in number and their progeny fuse with muscle fibers and donate their nuclei to them to help them repair and become larger.

Just as muscle damage and stress increase IGF-1 release, dietary protein does too. That’s one reason why it’s important to get enough dietary protein when you’re trying to build lean body mass. Interestingly, animal protein seems to raise IGF-1 levels more than plant protein does. Regular training appears to increase the number of receptors for IGF on muscle tissue so your muscles are better able to tap into its benefits.

Growth hormone is a protein produced by the pituitary gland. It exerts some of its effects through the hormone we just discussed – IGF-1. IGF-1 fuels the growth of muscle fibers by activating satellite cells but most of the “growth” from growth hormone comes from an increase in the connective tissue that surrounds muscles and tendons rather than by an increase in the size of the muscle itself. Growth hormone also helps to build bone and increase the breakdown of stored fat to make muscles look more prominent.

Testosterone may be a male hormone but women have testosterone too, although it’s only about 10% of the amount men have. In women, testosterone is produced by the adrenal glands and by fat cells, so women who don’t have a lot of body fat usually have lower levels of circulating testosterone – and estrogen for that matter. Testosterone has the benefit of boosting protein synthesis to help build lean body mass.

Testosterone stimulates muscle growth through a variety of mechanisms but high levels aren’t an absolute requirement for muscle hypertrophy. Women who have only a fraction of the testosterone that men have are able to build lean body mass but it’s difficult for women to get the same degree of bulk as men without using bodybuilding supplements. That’s reassuring to women who fear they’ll “bulk up” if they lift heavy weights.

Cortisol, the stress hormone, isn’t your friend when you’re trying to increase lean body mass. It blocks the uptake of amino acids into muscle cells where they can be used to synthesize proteins. It also boosts the breakdown of existing muscle proteins and releases the amino acids into the bloodstream where they’re available in case your body needs them to make other proteins during periods of stress. So, cortisol is a catabolic hormone. Cortisol also blocks the action of testosterone, further interfering with muscle growth.

Cortisol levels go up when your body is stressed – by excessive calorie restriction, long periods of endurance exercise, lack of sleep and emotional stress. That’s why it’s important not to overtrain and to make sure you’re adequately nourished and rested when you’re trying to build lean body mass. You want to keep cortisol levels from rising and interfering with the ability of your muscles to grow.

These are the major hormones that have an impact on muscle hypertrophy and your ability to build muscle. Growth hormone, testosterone and IGF-1 are all anabolic while cortisol is catabolic – and a hormone you want to keep at lower levels. How you train, nutrition and sleep habits all have an effect on these hormones so you do have some control over them through lifestyle.

The best solution is to train hard without overtraining, make sure you’re getting appropriate amounts of all of the macronutrients your body needs, sleep 7 to 8 hours a night and do your best to control stress – and be patient. Even under the right conditions, building lean body mass takes time.

The University of New Mexico. “The Mystery of Skeletal Muscle Hypertrophy” Hernandez and Kravitz.