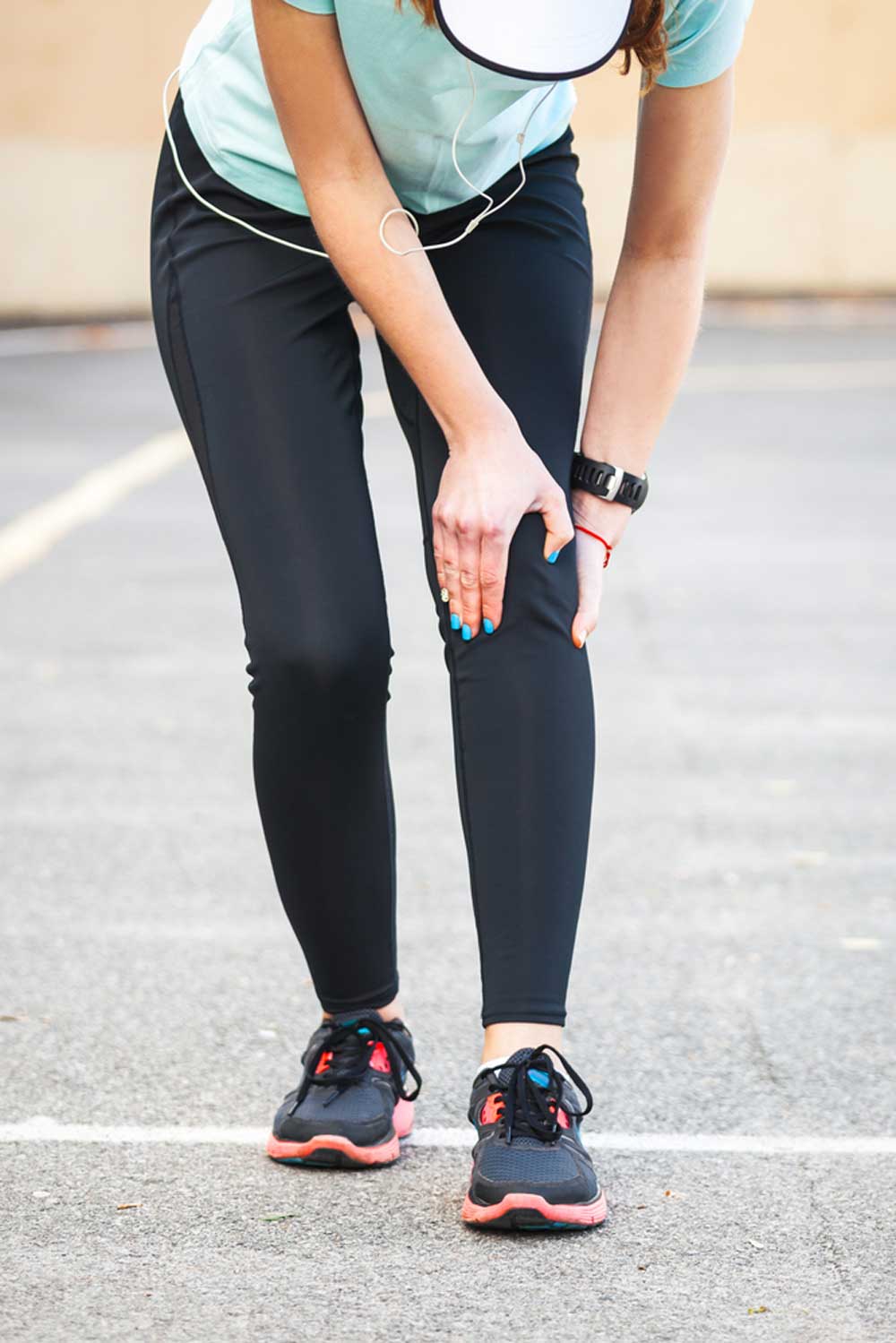 One of the more common knee problems physically active people contend with is iliotibial band syndrome. This inconvenient orthopedic issue is most common in distance runners but can affect anyone who is physically active. Distance running seems to be a strong pre-disposing factor as sprinters and people who run short to moderate distances aren’t at the same degree of risk. Regardless, iliotibial band syndrome can strike any active person, especially those who have anatomic abnormalities or muscle imbalances. It’s also not uncommon in people who do high-intensity interval training, especially when the active intervals include running with a shift in direction or running on a track in the same direction every time.

What is Iliotibial Band Syndrome?

A thick layer of connective tissue called fascia extends from the hip to the tendons in the biceps femoris, tibia, and patella tendons. In people with iliotibial band syndrome, this fascial band becomes irritated and inflamed, due to repeated flexion and extension of the knee. It’s not hard to see why runners are prone to this condition! Women are also at higher risk due to their wider pelvis. When you have a wider pelvis, you rotate more when you run, and this places more stress on the iliotibial band.

Iliotibial band syndrome is one of the most common causes of knee pain in female runners.  Yet, cyclists and hikers can be sidelined by this condition as well. You can even develop it with a walking program if you try to walk too much too quickly or try to tackle a lot of hills early on.

The most common symptom of iliotibial band syndrome is pain along the outside of the knee. Some people also have pain that extends upward into the lateral thigh and even into the hip, but, the pain is primarily along the lateral aspect of the knee and gets worse if you walk on an incline or go up and down stairs. Some people experience “popping” when they flex and extend their knee.

Most knee pain in the FRONT of the knee is NOT iliotibial band syndrome. Front knee pain is more likely to be patellofemoral syndrome, also known as runner’s knee. Patellofemoral syndrome usually stems from trauma to the knee or from overuse of the knees as in excessive amounts of running or jumping. Muscle imbalances and weakness of the muscles in the hips and knees can be a factor too.

So, if the pain is in the front of your knee, it’s more likely patellofemoral syndrome. But, if it’s along the side, odds are that it’s iliotibial band syndrome, although it’s important to get a definitive diagnosis, especially if you injured your knee. In most cases, a physician can make the diagnose based on the history and physical exam. You typically don’t need an imaging study unless the diagnosis is in question.

If you run and cycle a lot, especially if you suddenly increase the amount of either form of exercise, you’re at higher risk of iliotibial band syndrome. Certain factors seem to boost the odds of developing this uncomfortable condition independent of the type of workout you do. For example, weak hip abductors increase the risk as tight abductors place more strain on the iliotibial band. People who are knock-kneed or who supinate their foot (turn it outward) when they run are also at higher risk. Tight gastrocnemius muscles, the big muscles in the calves, also predispose to iliotibial band syndrome. Finally, having a leg length discrepancy, one leg longer than the other, can be a factor.

You may not have control over the length of your legs or whether you’re knock-kneed, but you can lower your risk of this inconvenient knee problem by not suddenly increasing the distance you run, by wearing appropriate shoes, and by correcting muscle imbalances that contribute to this condition. That includes strengthening like weak hip abductors and stretching tight calves. To complicate matters, a study published in the Internal Journal of Sports Medicine in 2008 suggests that weak hip abductors are NOT linked with iliotibial band syndrome and questions whether strengthening them will reduce the risk of developing it.

What works if you have iliotibial band syndrome? Studies show that conservative treatment including rest, ice, and stretching. One study found that 44% of cases of iliotibial band syndrome are cured with conservative treatment after 8 weeks and more than 90% at 6 months. In a small number of cases, the condition becomes chronic and surgery may be an option. Fortunately, that’s not common. Some physicians recommend a local corticosteroid injection into the inflamed/irritated area before considering surgery. Corticosteroids reduce inflammation but also have side effects and shouldn’t be a first line treatment. In most cases, changing your exercise habits and limiting activities that involve flexion of the knee for a few weeks will help.

How to Prevent It

If you run, don’t increase your mileage too quickly and avoid track workouts where you consistently run in the same direction. Downhill running and running on uneven surfaces like a trail can irritate the iliotibial band and cause irritation too. Make sure you’re wearing supportive shoes as well. Avoid footwear with an increased heel height and width since this can cause over-supination of the foot and place stress on the iliotibial band.

If you have knee pain, get it evaluated, especially if you have a sudden injury. Iliotibial band syndrome is usually gradual in onset and causes the gradual, not sudden, onset of knee pain. Most importantly, correct any muscle imbalances, especially hip abductor weakness, that may contribute to this condition. If you run, wear appropriate footwear and gradually increase your distance.

Why Are My Knees Hurting? 5 Common Causes of Knee Pain in Active People

The Everyday Habit That May Damage Your Knee Joints

Knee Health: Are You at High Risk for Knee Osteoarthritis?