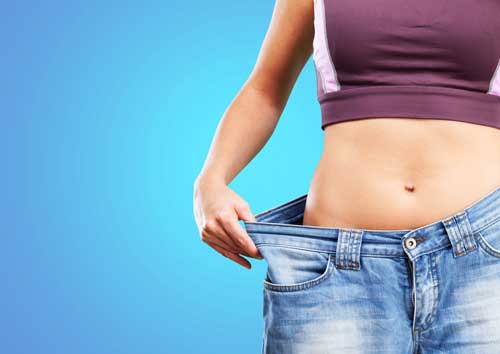 One reason people exercise is to burn body fat and lose weight. However, there’s a difference between losing weight and shedding body fat. Fat loss, not just weight loss, is the ultimate goal. Weight loss refers to the loss of fat AND muscle. So, when you tell someone you lost weight, they’re only getting part of the story. Did you lose mostly fat or was a portion of what you lost muscle tissue?

The Myth of the Fat-Burning Zone

As mentioned, one reason we work out is to lose body fat. For years, you were probably told that jogging on a treadmill, cycling at a moderate pace on an exercise bike, or doing an hour-long aerobics class was the way to burn fat, even though you barely broke a sweat. This goes back to the concept of the “fat-burning zone.” It’s the idea that your body mainly burns fat as fuel when you’re working out at a light to moderate pace – and isn’t that the objective – to burn fat?

No doubt if you’re trying to lose body fat, you want your body to tap into fat stores and use them as a source of energy. BUT you want to burn calories too. It’s true that you burn a higher percentage of fat when you pedal an exercise bike while reading a magazine than you do sweating it with a HIIT routine. But you have to work out longer to burn enough calories to make a dent in your fat stores with the former.

To put it in perspective, you also burn a higher percentage of fat versus carbs when you sit idly in a chair watching television. Your body uses about 60% fat and 40% carbs for this very non-intense activity. On the other hand, if you were to jump out of your comfy chair and do a burpee routine – 10 burpees, 10 seconds of rest and repeat, you’d burn fuel at a ratio of 30- 40% fat and 60-70% carbs. However, you’ll blast significantly more calories doing the burpees. The additional calories you expended means you burned more total fat even though the percentage of fat you burned was lower.

The Much Coveted After-Burn

There’s another difference between moderate-intensity and high-intensity exercise. Exercising at a high intensity places more stress on your body. As a result, you get a greater release of hormones like epinephrine, norepinephrine, growth hormone, and testosterone that increase your metabolism. After an intense workout, your body has to burn more calories to recover – to do things like restore your body to a normal pH, remove lactate from your system, and replenish glycogen stores. Don’t forget, the burpees increased your core body temperature and your body has to cool down.

The extra energy you expend and fat you burn after an intense workout is called the after-burn and it works in your favor when you’re trying to lose body fat. For example, when you work out at 75% of your V02max (aerobic capacity) versus 50% of your V02 max, the after-burn you get almost doubles. Higher intensity equals greater after-burn.

What does this mean? Light to moderate-intensity exercise, despite being an activity that mainly uses fat as fuel, doesn’t burn a high ABSOLUTE amount of fat because you don’t expend enough calories doing them. Yes, you could do these activities for an hour or two and burn a significant quantity of fat but that’s pretty time-consuming. In addition, once you completed your one or two-hour jog or bike ride, your metabolism and rate of fat burning will drop along with your activity. In contrast, high-intensity exercise burns more calories and does it for several hours after you stop.

Therefore, for the purposes of fat burning, high-intensity exercise, a.k.a interval training makes the best use of your time, unless, of course, you have time to take a slow, two-hour jog. It’s no wonder many reformed joggers are now doing some version of HIIT training. If you’re trying to burn fat, move beyond the fat-burning zone and make your muscles burn. Don’t forget about the importance of resistance training either. Heavy resistance training and circuit workouts give an after-burn too.

What about the cardiovascular benefits of staying in the fat-burning zone? Recent studies show that high-intensity exercise has more benefits for heart health than exercise that keeps you in your fat-burning zone. Not only does HIIT improve your aerobic capacity and lower blood pressure, but intense training also creates a healthier balance between your sympathetic and parasympathetic nervous. This may reduce your risk of having a heart attack or fatal abnormal heart rhythm.

Now you know why the fat burning zone isn’t the zone you need to be in for weight loss. Enter the high-intensity zone instead! Save the fat-burning zones for light days when you’re taking it easy. You’ll ultimately burn more fat in less time with vigorous exercise than you will in the fat-burning zone.

What Happens When You Do Cardio on an Empty Stomach?

3 thoughts on “The Truth About Weight Loss, Body Fat Burning, and Exercise”