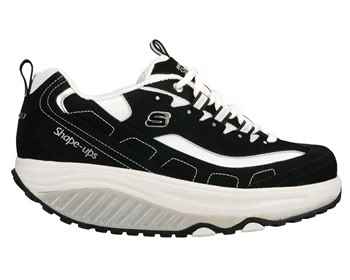 New fitness products and programs appear every day, from diet and exercise plans to pills and workout gadgets. Endorsed by celebrities, they win consumers over with their promises of fast and dramatic results. Companies publish testimonials from people who swear by the latest craze. Some of these programs are successful, but they usually involve healthy lifestyle changes and hard work. Most fitness experts agree that promoting general health through safe weight loss and good nutrition is a more realistic approach than rushing to follow every fad. However, products such as toning shoes might warrant a closer look in order to determine their effectiveness.

What Are Toning Shoes, and Do They Work?

Toning shoes are just one example of a fitness trend that has taken off in the last few years. In 2010, The Sports Business Journal reported that the toning shoe industry was projected to become a $1.5 billion segment of the athletic footwear market that year. The burning question, however, is whether they have proven to be effective at what their manufacturers claim they can achieve.

Toning shoes are available in a variety of styles, but most of them are designed in such a way that the wearer must shift his or her weight to achieve balance on an unstable sole. Many of the shoes have curved “rocker bottom” soles, preventing the feet from lying flat. Some are worn only when exercising, while others can be worn throughout the day. The most common style is an athletic shoe, yet there are also more casual versions such as sandals and flip-flops.
The short answer to the question of whether toning shoes work is yes. They do seem to succeed at accomplishing certain objectives, but wearing them does not necessarily confirm all of the health claims that have been made by their manufacturers. The shoes are also a relatively expensive investment. Why, then, are they so attractive to consumers?

Claims Made by Toning Shoe Manufacturers

The three most common claims in the toning shoe industry are that the shoes will increase exercise intensity, they will help burn more calories, and they will improve muscle tone. While there are subtle design differences between the leading brands, their advertisements make the same general guarantees across the board.
The pioneer in toning shoes, the Masai Barefoot Technology (MBT) shoe, was created in 1996 by Swiss engineer Karl Muller, who dubbed his creation the “anti-shoe.” Available in the United States beginning in 2003, the design of these shoes was based on Muller’s theory that walking barefoot is most beneficial, which he based on his study of the Masai tribe in Africa.

Another popular brand is Skechers Shape-Ups, which claim to tone and strengthen muscles, improve circulation, and reduce body fat. Likewise, Reebok EasyTone shoes also emphasize instability, which activates different muscles and causes them to work harder in order to maintain balance.
There are also toning shoes made by Earth Shoes and several other traditionally nonathletic brands. Sano fitness walking shoes are another example. In addition to the standard arguments in favor of toning shoes, these manufacturers also claim that their shoes relieve stress on joints and improve posture. Their “negative heel technology” means that the toes are positioned higher than the heel to tone muscles and reduce pressure on the spine.

Scientific studies of toning shoes have produced mixed results in recent years. In numerous cases, the test groups were so small that the validity of the results has been questioned.

In 2010, the American Council on Exercise (ACE) published the results of a study carried out by exercise scientists at the University of Wisconsin, La Crosse. Researchers compared results from wearing toning shoes versus regular athletic or running shoes, testing muscle usage and exercise response. According to the summarized findings, there were no noticeable differences between the two types of shoes when it came to factors such as muscle usage and the number of calories burned.
Reebok, New Balance, and nearly every other manufacturer of toning shoes have cited their own studies, touting the effectiveness of their products. The most common criticism of such research, though, is that the companies who sponsor the studies can manipulate the statistics to say whatever they want. Opponents of the ACE study have argued that it used a small group of participants, and it was not published in a peer-reviewed journal. Furthermore, critics of the ACE study findings have accused its members, many of whom are fitness trainers, of engaging in a “turf war” with the toning shoe industry, out of fear that people who buy toning shoes will see their trainers and gym memberships as unnecessary.

Views from the Medical Field

Physicians have found that wearing toning shoes might be effective for improving posture, but not necessarily for losing weight or increasing muscle tone. Initially, the leg muscles might have to work differently, but they would soon adjust and the long-term toning benefits would be minimal. The shoes might also improve balance for some, but additional studies are necessary before such claims can be confirmed. A number of people have argued that the shoes alleviate their heel pain, yet some experts warn that people with Achilles tendon issues should avoid wearing toning shoes.
The fitness claims that have been made about toning shoes have been, for the most part, unfounded, and there have even been some reports of injuries. The bright side is that most medical experts agree that at least some people are out walking in their new toning shoes, whereas they might not have been physically active before.
People who want to put toning shoes to the test should follow the instructions for wear and be realistic about the potential results. Physicians warn that certain individuals, such as those with arthritis, should not wear them at all. Instead, they suggest shoes built with a flat bottom that are more flexible and put less pressure on the joints. In general, podiatrists recommend traditional walking or running shoes instead of toning shoes. In many cases, the people who have successfully lost weight or gotten in shape while wearing toning shoes usually have done so in conjunction with better eating habits and working out more frequently.

What Type of Workout Shoes Are Best for Weight Training?

6 thoughts on “Toning Shoes: Do They Really Work?”