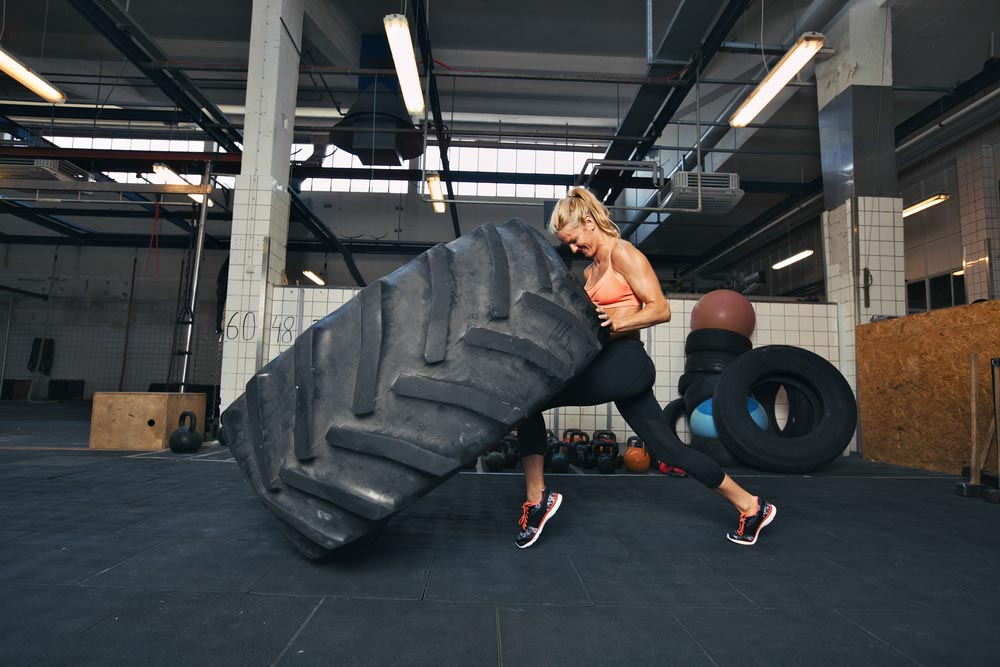 It’s normal to be sore after a tough workout, especially if you aren’t accustomed to working that hard. You might feel stiff and have a bad case of achy muscles. Sound familiar? This is due to delayed-onset muscle soreness or DOMS. Although we don’t fully understand the etiology of delayed-onset muscle soreness, it’s believed to be caused by microtrauma to muscle fibers. In other words, the muscle fibers get stretched and torn. DOMS is more common after eccentric exercise where you lengthen a muscle against resistance.

Most of us familiar with DOMS, but the majority of people who lift weights haven’t experienced a more serious cause of muscle pain called rhabdomyolysis.

Rhabdomyolysis is often abbreviated “rhabdo” by the weightlifting community. It’s typically brought on by extreme exertion, not just weight training, but other forms of extreme exercise as well. Fortunately, even among people who train hard, rhabdomyolysis is uncommon. That’s a good thing because rhabdo is a potentially life-threatening condition.

What causes rhabdomyolysis? Rhabdo is triggered by the rapid breakdown of muscle tissue related to extreme exertion. In fact, muscle cells actually die in people affected by rhabdomyolysis. Upon death, they release their contents, including a variety of proteins and enzymes. These proteins include creatine kinase and myoglobin. These proteins are damaging to the kidneys and at high levels, they cause the kidneys to fail and, in some cases, lead to permanent kidney damage or death.

How would you know if you have it? The classic signs and symptoms of rhabdo are marked muscle pain and weakness. A tell-tale sign is dark urine, almost the color of a glass of tea. The dark coloration of the urine comes from myoglobin released from the muscle cells as they die. Muscle cells, when they are injured, also release enzymes, including creatine kinase into the bloodstream. In fact, health care practitioners diagnose rhabdomyolysis by discovering high levels of creatine kinase in the urine of people with rhabdo.

As mentioned, the biggest risk of rhabdomyolysis is kidney failure. When muscle cells release their stores of myoglobin, it enters the bloodstream and ultimately ends up in the kidneys. Once there, myoglobin breaks down into compounds that damage kidney cells. Up to 40% of people with rhabdomyolysis develop kidney failure. Fortunately, this can often be reversed with lots of intravenous fluids and bicarbonate to raise the pH of the urine. The sooner treatment begins, the better the prognosis. Of course, it’s best to not get it in the first place! Recovery can be slow and muscle weakness and fatigue can persist for weeks to months.

Who is at Risk?

Although you hear the most about cases of rhabdo among athletes who overexert themselves, it can happen in other situations as well. Trauma to a muscle and immobilization of a muscle can trigger muscle cell death that leads to rhabdomyolysis. For example, an individual who has their arms tied and struggles against the restraints can damage the muscle to the point that rhabdo occurs. A person who is immobilized due to a pelvic or hip fracture is also at risk. Severe infections that get into the bloodstream or cardiac or blood vessel surgery can trigger muscle cell damage as well.

Other factors may also place you at risk. Alcohol, illicit drugs, and some prescription medications increase the risk of rhabdo as well.  Two types of medications that enhance the risk are drugs with anticholinergic effects. This includes a long list of medications, examples are anti-depressants, some allergy medications, anti-seizure meds, and more. Non-steroidal anti-inflammatory medications, like ibuprofen, boost the risk as well. Even caffeine raises the risk at higher doses.

Still, in young people, rhabdomyolysis is most common after extreme exertion, particularly in a hot or humid environment. For example, people who run ultra-endurance marathons sometimes suffer from rhabdo. There are also cases of athletes developing it after an extreme training session. Occasionally, one or more members of a football team player are diagnosed with it after a tough training session. But, all in all, rhabdomyolysis is not that common. In fact, it’s likely that some people are more prone to develop it due to genetic factors.

What about strength training and rhabdomyolysis? There are cases of bodybuilders developing rhabdo after high-powered training sessions of a magnitude they aren’t accustomed to. Studies show a higher likelihood in people who do a greater number of sets using heavy weights and who consistently take their sets to muscle failure. It’s also more common when people try to do an extreme number of repetitions of an exercise, even without weights. For example, there was a case of a teenage basketball player who developed it after doing 800 sit-up, 400 push-ups, and a 3.2 kilometer run in a single session.

How to Lower Your Risk of Rhabdomyolysis

It’s unlikely you’ll develop rhabdomyolysis if you train in moderation. The risk increases when you try to do too much or too much too quickly. If you’re a newbie, begin with light weights and limit your training sessions until your muscles adapt to the stress of training. It’s okay to challenge yourself by taking some sets to failure, but don’t force yourself to take all sets to muscle failure. Also, don’t lift to failure every time you train. The same applies to cardio and HIIT training.  Don’t try to do an exhaustive training session your first time.

Make sure you’re drinking enough fluid if you’re exercising in a hot or humid environment. Interestingly, some studies suggest that drinking a protein shake before working out may reduce the risk. Also, drinking an electrolyte-rich beverage rather than plain water may lower the risk. When you sweat, you lose potassium in your sweat and this can cause a reduction of blood flow to the muscle and place added stress on the muscles you’re working.

Rhabdomyolysis is a condition you should know about, but, fortunately, the odds of developing it aren’t high. Yet, it’s still important to take steps to lower your risk by staying hydrated and not doing extreme training. Also, be aware that exercising in a hot and environment and certain medications place you at higher risk. Talk to your physician about whether you’re taking one of those.