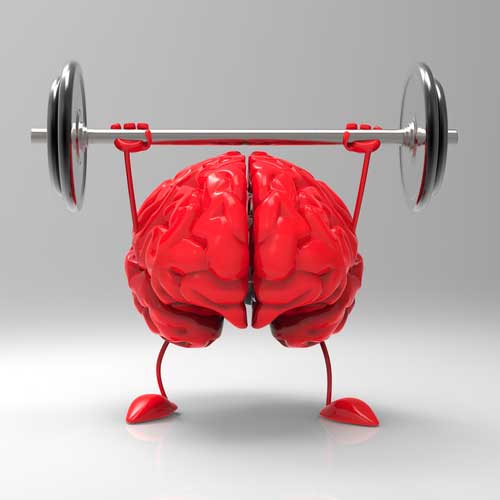 Brain power – it controls everything we do, including strength training. Think about it. You would never be inspired to pick up a barbell or pair of weights unless you consciously decided, with the help of your brain, that you needed to get stronger. Every action, with the exception of reflexes, originates in some portion of your brain.

Here’s something that may surprise you. Thanks to your brain, you have the power to be stronger long before your muscle fibers increase in size and your muscles grow to a point they can move more weight. You actually gain some strength after your first few workouts.

How can it be that strength gains come before an increase in muscle size? The first few weeks after you begin lifting weights or working with resistance bands, your muscles don’t increase in size. If you were to measure their cross-sectional area, they would be pretty much the same or maybe slightly bigger right after a workout due to increased blood flow and “the muscle pump” you get after a resistance training session. This “pseudo” increase in size doesn’t explain the modest strength gains many people experience after only a few workouts. It would almost defy logic that strength would increase without a change in size. How does this happen?

Strength increases quickly in response to overload through a process called neurological adaptation. In response to a single strength-training session, your brain gears up to meet the increased challenge you’re placing your muscles under. Muscle fibers are controlled by nerves that ultimately get input from the brain. A single motor nerve sends input, including directions to contract, to a number of muscle fibers. Each motor nerve with the muscle fibers it innervates is called a motor unit. A muscle, depending upon its size and the complexity of the movements it carries out, will have a number of motor units.

When you first start strength training, the motor units that make up a muscle contract in an uncoordinated fashion.  Since the motor units aren’t accustomed to working together, it’s harder to generate force. It’s as if you and seven or eight other people are trying to move something heavy and you’re each lifting at different times when it should be a coordinated, team effort. The happens with untrained motor units. The motor units haven’t “learned” to work together to maximize the force the muscle can generate, so you can’t lift as much.

What happens during the first few weeks of strength training is the motor units gain the ability to work together, to coordinate their efforts, and become better synchronized. As a result, the muscle you’re training can generate more force even though it hasn’t changed in size. It’s not just that you feel stronger – you really are stronger, thanks to your motor units working together in synchrony. In addition, your brain learns to activate more motor units to generate additional force to meet the increased demands of training.

After a few training session, not only do motor units learn to work better together, so do your muscles. Every muscle contraction involves the action of an agonist and an antagonist muscle. When you flex your biceps, the agonist muscles, or flexors, shorten while the extensor, or antagonist muscle, relaxes. When you first start strength training, your antagonist muscles are “on guard.” After all, they’re there to protect your muscles and joints from injury by limiting the amount a muscle can flex. Once you’ve done a few strength- training sessions, the antagonist’s muscles lighten up a little on their braking action so you can generate more force. This happens before the muscle increases in size.

The Magic of Mind Power

As you might expect, the first group made strength gains, as measured by the amount of weight they could lift on the hip flexion machine, while the third group didn’t. What’s fascinating is the second group, who only went through the movements in their mind, gained almost as much hip flexor strength as the first group!

Does this mean you can be a couch potato and get stronger? It would be shortsighted to suggest ONLY sitting in a chair and visualizing getting stronger, but this study does show how important mind power is to success in what you do, including strength training and athletics. That’s why so many coaches emphasize mental training for athletes, not just physical training. As a golf pro, Bobby Fisher was fond of saying, “Competition is won or lost on the six-inch playing field between the ears.” What’s between your ears matters when you’re weight training too.

How can you put this concept to use? Spend more time visualizing success. Close your eyes and see yourself lifting a heavier weight than you’re accustomed.  Draw as many senses into this vision as you can. Hear the sound of the weight against the floor, feel the texture of the dumbbell or barbell – then taste the sweetness of victory!  Spend 5 minutes doing this before each workout. When you do, your brain will begin forming neurological connections that make you stronger. Research suggests that positive output from the brain seems to drive muscle activation even when you’re not actively lifting.

How much confidence do you have in your abilities? Practice the art of positive self-talk, especially during those times when you doubt your ability to get stronger or leaner. How many people quit strength training or are afraid to start because they kept playing the “I can’t do it” scenario in their mind?

Remember, thoughts, behaviors, and emotions are all interconnected. Also, keep in mind you’re only competing with yourself. Don’t get discouraged because you’re not lifting as much as someone else or you’re not making fitness gains as quickly as you’d like – just keep moving forward and motivating yourself with positive thoughts and self-talk and you’ll get there.

On Fitness. January/February 2015. “The Neurological Side of Strength”

How Often Should You Change Your Strength Training Routine?

All of Cathe Friedrich’s Workout DVDs

One thought on “The Role Your Brain Plays in Strength Development”