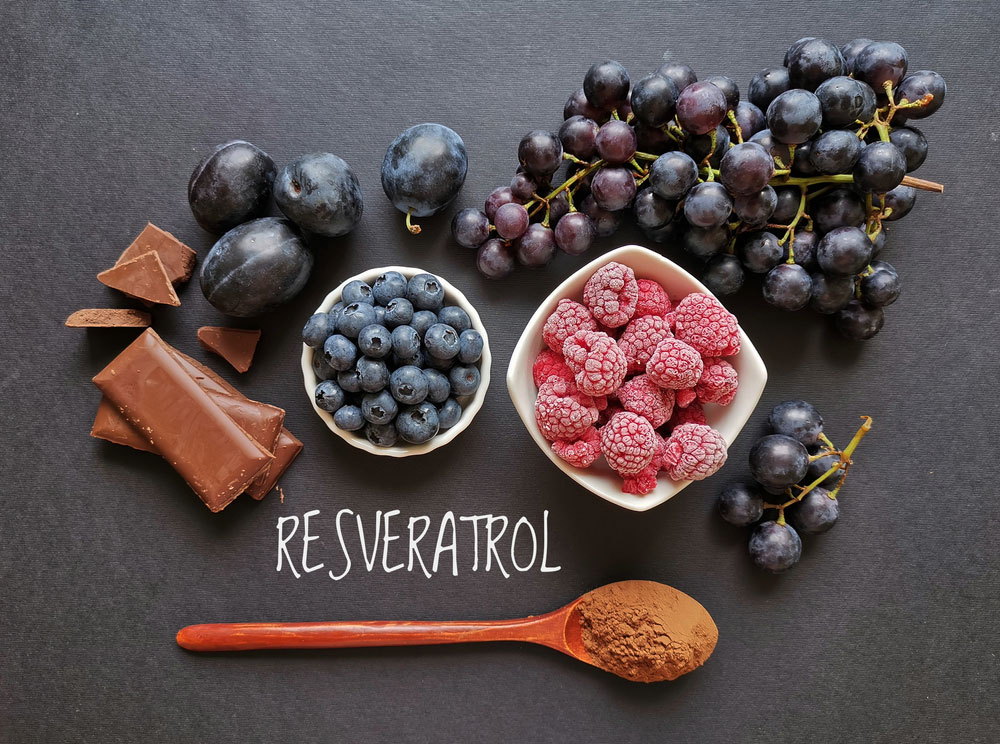 What do grapes, blueberries, and peanuts have in common? They are all rich in resveratrol, a compound that’s the focus of intensive research. Resveratrol, also known as trans-resveratrol, is a natural compound called a stilbenoid produced naturally by some plants.

Plants produce these compounds when threatened by injury, ultraviolet light, or fungal infection. Resveratrol belongs to a group of compounds called phytoalexins. That’s a mouthful, isn’t it? While resveratrol is beneficial for plants because it protects them, it may also have health benefits for humans.

One of the most compelling health characteristics of resveratrol is its antioxidant activity. Along with its ability to fight oxidative damage, it helps reign in another process that causes tissue damage, and inflammation, a contributor to many common health problems.

Some studies also show that resveratrol has some of the same effects on the body as calorie restriction, a process that may slow aging in certain species. Results are conflicting in humans, but anything that reduces inflammation should have a favorable effect on aging and the risk of developing chronic disease.

Does Resveratrol Have Brain Health Benefits?

Studies in the laboratory and in animals show resveratrol may protect nerve cells in the brain against damage due to oxidative stress. Some research suggests it may lessen the formation of abnormal proteins in the brain called beta-amyloid that people with Alzheimer’s have in greater amounts in their brain.

Other research shows it could be beneficial for Parkinson’s and the most common type of stroke, ischemic stroke. An ischemic stroke occurs when a blood vessel in the brain becomes blocked or narrowed, usually due to a clot, preventing blood flow to an area of the brain. Plus, foods that contain resveratrol often contain other antioxidants that could be brain healthy.

Resveratrol could improve heart health. It lowers total cholesterol and increases good (HDL) cholesterol in the blood of animals. The effect on humans is less clearcut. Some small studies have found positive effects on cholesterol levels in healthy people, while others show no benefits. Resveratrol may also enhance heart health by reining in inflammation. Studies show resveratrol helps keep cholesterol in its unoxidized state, which is important for heart health since oxidized cholesterol is the most damaging form.

Another risk factor for cardiovascular disease is hypertension. Studies show resveratrol lowers blood pressure by increasing the amount of nitric oxide blood vessels produce. Nitric oxide is a gas that helps expand the artery to lower blood pressure. Resveratrol may also improve endothelial function—the ability of arteries to dilate or constrict depending on what’s needed by the body—which helps regulate blood flow and prevent clots from forming in arteries.

The most recent findings from the Framingham Heart Study also suggest a link between resveratrol and a reduced risk of heart disease. Researchers found those who ate the highest amounts of resveratrol had 30 percent lower coronary artery calcium levels than those who consumed the lowest amounts. A calcium score is a rough measure of the amount of calcified plaque in your coronary arteries, which are the blood vessels that supply blood to your heart. Plaque can block the flow of blood and oxygen through a blood vessel, leading to a heart attack or stroke.

Resveratrol may also have anti-cancer effects. This compound inhibits the growth of some types of cancer cells in vitro. In addition, resveratrol may reduce inflammation in the body, which is critical for healing wounds and fighting infection. In this respect, it is like many other antioxidants (including vitamins C and E).

Don’t grab a resveratrol supplement just yet! One study linked resveratrol with a higher rate of cancer deaths. Strange since some studies show it may protect against certain types of cancer. This shows scientists need to delve deeper to determine whether resveratrol can decrease or increase a person’s risk of developing cancer.

Bioavailability May Be a Limiting Factor

One problem with resveratrol is it’s not highly bioavailable, meaning your body can’t easily use it. But even resveratrol supplements are well tolerated and cause no serious side effects, except for possible mild digestive upset.