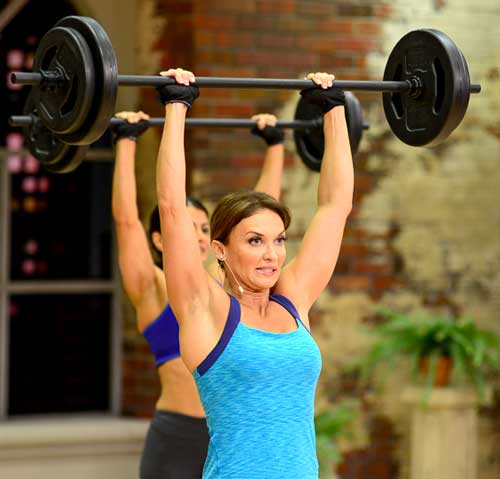 There are lots of ways to “fine tune” a resistance training routine to add variety and ultimately get better results. Change is especially good if you’ve reached a plateau and need to jumpstart your gains. One variable you can tweak when training with dumbbells or barbells is the rep speed with which you do each repetition. Slowing down and speeding up each repetition you do of an exercise changes the stimulus you place on the muscles you’re working. What are the benefits of fast reps versus slow reps and vice versa? Is one better than the other for strength gains?

The biggest benefit of reducing rep speed is it helps to optimize your form. When you do reps at a faster pace, you use momentum to move the weight. This reduces the amount of work your muscles are forced to do. Plus, it’s easy to get sloppy with form when you move the weight too fast.  Most people spend one or two seconds lifting the weight (the concentric phase) and an equal amount of time lowering the weight (the eccentric phase). This is the typical rep speed the average person uses when training.

Some weight trainers use a form of training called “super slow training.” Rather than lifting a weight in one or two seconds and lowering it at about the same speed, slow lifters take 10 seconds or more to lift the weight and 10 or more seconds to lower it. This strategy takes patience and increases total workout time. Advocates of super slow lifting point out that this technique maximizes the amount of time the muscle is under tension and time under tension is an important factor in developing strength and mass.

As the name suggests, fast reps are done at a faster tempo. Rather than devoting 3 or 4 seconds to complete a rep as in standard weight training, you cut the time in half. Accelerating the speed of the movement builds power, the ability to generate force quickly. Fast rep speeds maximize recruitment of fast-twitch muscle fibers, the ones geared towards strength and power. Using a fast rep speed has some drawbacks as well.  For one, your form can easily fall apart, especially if you choose a weight that’s too heavy. Secondly, when you move a weight quickly, you add momentum. Using momentum reduces the tension placed on the muscle. You’ve probably seen Olympic lifters use momentum to heave a heavy weight above their head. Not only is their risk of injury higher, but they’re also limiting the amount of time their muscles are under tension.

Which Rep Speed is Better?

One small study compared slow and fast rep speeds. In this study, 16 young adult males, who were experienced weight trainers, were divided into 2 groups. Each group did 12 reps of bench press and incline bench press and completed 4 sets total. The only difference between the two groups was their rep speed. One group of men used a slow rep speed, taking 6 seconds total to complete a rep. The second group took only 1.5 seconds to complete each rep. Prior to the study, researchers measured their strength using a one-rep bench press test. They repeated the one-rep bench press test 224, 48, 72 and 96 hours after the study.

It All Comes Down to Intensity

Although this study suggests faster rep speeds are better for building strength, you can’t draw conclusions from a single study, especially a small one. Not all studies show repetition speed has a significant impact on strength development. Whether you’re trying to build strength or muscle mass, the intensity is ultimately more important than the number of reps and the volume of sets you do. Fast rep speeds reduce the intensity, at least to some degree, by introducing more momentum. Slow rep speeds eliminate momentum and increase the total time the muscle is under tension. So, there are benefits to both slow and rapid rep speeds. Fast rep speed would have a clear advantage over slow if you’re trying to build power.

If you do slow lifting using slow rep speeds, balance it out with some cardio. When you lift a heavy resistance slowly, the increased pressure generated by your muscles reduces venous return, blood return back to the heart. A study published in the journal Hypertension showed slow weight training using heavy resistance may contribute to blood vessel stiffening. If you have high blood pressure, talk to your doctor before doing slow lifting. It’s also important to breathe properly when doing reps at a slow rate. People have a tendency to hold their breath and this further reduces blood flow back to the heart.

Rep speed is one more variable you can adjust to change your workouts. Why not periodize your workouts by changing the rep speed? One week train with a slow rep speed. The next week a standard rep speed and the third week a fast rep speed. Then cycle back through. Rep speed periodization will allow you to expose your muscles to different stimuli, help you avoid plateaus and reduce your risk for overtraining. Rep speed is a variable many people fail to consider when adjusting a workout but it’s another way to change the stimulus you place on your muscles and challenge them in a new way.

Fitness Science. “Fast or Slow Reps, What is Most Effective?”

Lifting Tempo: What Role Does Rep Speed Play in Strength and Power Gains?