Ramp Up Strength and Power with Plyometric Drills

Ramp Up Strength and Power with Plyometric Drills 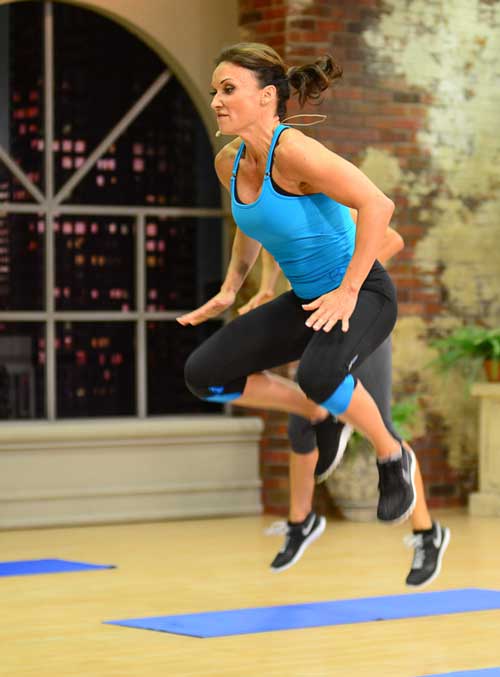 You might think of plyometrics as training best suited for athletes who want to improve their vertical jump. Certainly, plyometrics can do that, but what you might not know is that plyometric drills can also help you become stronger and more powerful, as well as improve your overall fitness level. It’s a type of training too many people don’t take advantage of.

A little history: Plyometric training was developed by a Soviet coach named Dr. Yuri Verkoshansky about 50 years ago. He originally referred to this new form of training as the “shock method,” but another coach later renamed it plyometrics later. Regardless of its name, plyometric training is a popular training modality for athletes of all ages, but it also has its place in the weight room. When your goal is to maximize strength and power, plyometrics can help.

Here’s an example. When you do a squat jump, a popular type of plyometric move, during the landing phase, the force on your lower body causes the muscles to stretch and store tension. When you jump up, that extra tension or force is released. The force discharged during the concentric or jumping phase is proportional to how much load was placed on the muscle and how quickly it was applied. It’s very similar to pushing down on a spring and watching it pop back up. The increased force generated during the rebound, in the case of a stretched muscle, primarily comes from an increase in the number of muscle fibers activated. Time is of the essence though. The stretching and contraction phase must occur without delay or some of the force is lost.

Why does stretching a muscle cause it to contract with greater force? When you lengthen a muscle, it activates proprioceptive sensors like muscle spindles. These sensors are designed to protect your muscles from being overstretched. Once activated by stretch, the spindles initiate a contraction of the muscle to bring it back to a “safer” length. At the same time, rapid lengthening of a muscle INACTIVATES another type of proprioceptor called the Golgi tendon organ. These sensors are there to keep your muscles from contracting so hard that they become damaged. With the Golgi tendon organs suppressed, contraction occurs with greater force since you don’t have the Golgi tendon organ limiting the force of contraction.

Strength Training and Plyometric Drills Complement One Another

Research shows that the two forms of training complement each other, with the two together offering superior strength development and muscle growth. Another study found the combination of plyometrics and strength training increased the percentage of fast-twitch muscle fibers, the ones that generate strength and power. When you combine this with the fact that plyometric exercises like squat jumps get your heart rate up and burn calories, you can see how plyometrics can help you get stronger, more powerful and help you shed body fat. Studies also show following a strength training exercise with a plyometric move creates an enhanced anabolic environment that’s optimal for burning fat and increasing lean body mass.

Power is force times speed, and plyometrics develop both. Therefore, you’ll become more powerful if you add plyometric drills to your workouts. Remember, you do not only lose strength as you age, but you also lose power too. In fact, adults lose power at a rate of about 3.5% per year after the age of 60. As many experts point out, most of the daily activities we do require not just strength, but power. Power training is no less important than strength training for staying fit and functional. Plyometrics adds a power component to your workouts, but remember plyometrics is only one form of power training.

Have Fun with Plyometric Drills

There’s a lot to love about plyometrics. The moves are dynamic, explosive and never boring. Adding a few drills to your workouts can add variety and excitement. One precaution: If you haven’t been exercising long, build up a base level of endurance and strength before adding plyometric moves to your routine. Doing so will help you avoid injury and make the moves more effective. Start with easier plyo moves like ball slams, two-legged hops and bounding before attempting more advanced ones like tuck jumps, box jumps, and plyo push-ups to lower your risk for injury. Gradually work up to more advanced plyometric exercises and drills.

If you have orthopedic problems, plyometric training, due to the stress it places on muscles and joints, may not be for you. Even if you have healthy muscles, tendons and joints, it’ important to use picture-perfect technique to avoid injury. Properly done, plyometric drills can help you prevent future injuries.

Plyometric exercises aren’t just for athletes: They’re for anyone who wants to build strength, power and speed. Make plyometrics part of your strength training program and you’ll maximize the results you get both from a strength and hypertrophy standpoint and in terms of incinerating body fat. If you want to get into better shape, plyometrics is for you.

How Plyometric Exercises Can Benefit Your Fitness Routine

The Fitness Benefits of Jumping