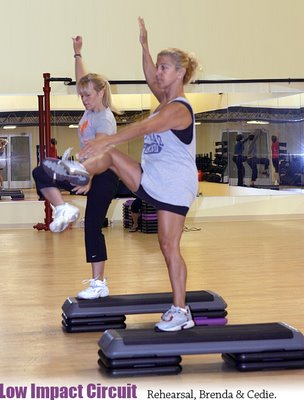 The picture of Brenda and Cedie on the left was taken during a recent rehearsal of Low Impact Circuit and Body Max 2. Rehearsals are now being held almost everyday up until the first film date on August 25th. During this time Cathe and the crew work hard on perfecting the routines and getting perfectly in sync. You won’t find very many mistakes in a Cathe video. This is not only because of the extra time we put into filming and editing, but also because of the hours and hours Cathe and the crew spend rehearsing.