Pear-Shaped People: Why Butt and Thigh Fat May Not Be Protective After All

Pear-Shaped People: Why Butt and Thigh Fat May Not Be Protective After All 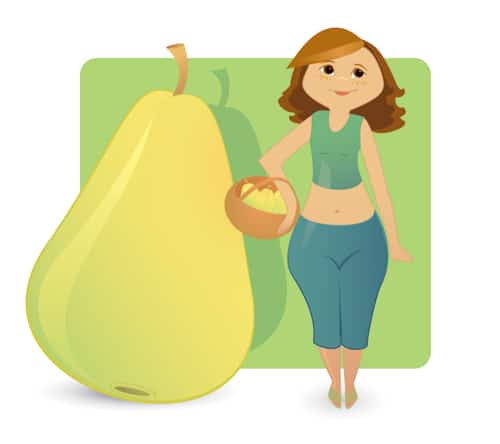 Pears and apples – they’re more than just fruit. These are also terms used to describe fat distribution – where people carry most of their fat. Like the shape of a pear, pear-shaped people, often pre-menopausal women, carry more fatty tissue in their hips and thighs. In contrast, apple-shapes store more of their fat in their mid-section – around their tummy and waistline. Men and post-menopausal women are more likely to fall into this category. Women often notice a shift in fat distribution around the time they go through menopause as hormone levels change. The once bothersome thigh and buttock fat take up residence around their waistline and tummy.

Pear-shaped people may not like the extra fat they carry in their thighs and buttocks, but based on prior research, experts believed that pear-shaped people enjoyed some health advantages their apple-shaped comrades didn’t. These benefits included a lower risk of heart disease and type 2-diabetes. That’s because people shaped like apples have more visceral adipose tissue, deep abdominal fat that’s linked with insulin resistance. Insulin resistance increases the risk for a number of health issues including type 2-diabetes and heart disease.

Being Pear-Shaped May Not Be So Protective After All

A recent study carried out at the University of California at Davis calls into question the idea that thigh, hip, and butt fat is harmless. According to their research, the “fluffy stuff” you store in your thighs and buttocks secretes higher levels of a protein called chemerin and lower levels of one called omentin-1. Why is this bad? Abnormal levels of these proteins are linked with insulin resistance.

The Problem of Insulin Resistance

Since insulin is a hormone that makes it more difficult for your body to mobilize stored fat as an energy source, when your body pumps out more insulin, it’s harder for your body to use fat as fuel. The result? You may experience weight gain and an increase in body fat, especially around the middle as more visceral fat is laid down.

Fortunately, lifestyle changes can reverse insulin resistance. Eliminating processed foods and foods made with white flour along with other rapidly-absorbed carbs like white potatoes and white rice reduce blood sugar spikes, so your body doesn’t have to pump out as much insulin. Exercise, especially higher intensity exercise, also improves the problem of insulin resistance. Exercise increases insulin sensitivity so cells take up glucose more readily and there’s less need for your pancreas to pump out more insulin.

Being Pear-Shaped May Not Offer Protection

Based on this research, thigh and buttock fat changes chemerin and omentin-1 levels – a change that’s linked with inflammation and insulin resistance. Higher levels of chemerin may be especially problematic since it’s associated with elevated triglycerides, low levels of HDL, the good cholesterol, elevated blood pressure and high C-reactive protein, a marker for inflammation. Low omentin-1 levels are linked with high blood sugar and triglyceride levels and low HDL. All of these factors increase heart disease risk.

What Should You Take Away From This?

If you’re pear-shaped and carrying excess fat in your lower body, it may not offer protection against heart disease and type 2-diabetes as once thought. That’s why it’s important to make the necessary lifestyle changes – diet and exercise – to increase lean body mass while reducing excess fat stores that alter proteins that affect inflammation and insulin resistance.

Strength-training and high-intensity aerobic training (interval training) are the best forms of exercise to do that. Combine it with a diet free of processed foods that focuses on healthy fat sources, lean protein, and fiber-rich carbs to lower your risk for health problems like type 2-diabetes and heart disease while reducing excess body fat. The bottom line? Lifestyle is important regardless of where you carry your body fat.

Does Where You Store Body Fat Say Something about Your Health?

Is It Possible to Be Obese and Metabolically Healthy?