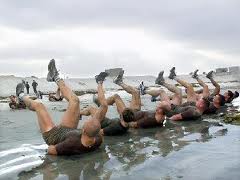 Navy SEALS are the most elite branch of American Special Forces, and most military experts consider their training to be the most difficult to endure in the entire world. A SEAL candidate (“SEAL” stands for Sea, Air, and Land, all elements in which a Navy SEAL operates) must survive BUD/S training, which stands for “Basic Underwater Demolition / SEAL” training. BUD/S lasts seven long grueling months and you may be surprised to learn that during that time there are no actual weights or weight-lifting involved. The majority of BUD/S training involves only bodyweight exercises (calisthenics) such as pull-ups, pushups, situps, dips, running, air squats, lunges, etc., (although logs and boats are used regularly, and the boats are usually loaded down with sand, or an instructor, water, or all three). Very few individuals actually complete SEAL training since the Naval Special Warfare Command is looking for a select group of elite men who are highly motivated and would rather die than quit. Due to the rigorous physical conditioning, the men who pass SEAL training are some of the most physically fit specimens on the planet. Hence, wouldn’t it make sense that if you wanted to get in shape, you could simply adopt some of the training patterns used at BUD/S, perhaps even pretend that you will soon attempt Navy SEAL training yourself, and by default wouldn’t you get in the best shape of your life? Of course, you would, so let’s get started.

(Note: the author of this article is NOT a Navy SEAL and has never served in any branch of the military.)

To even enter BUD/S training, a candidate must be in extremely good physical shape just to walk in the door. After studying various Navy SEAL documentaries, SEAL web sites with workout programs listed, plus youtube videos made by legitimate SEALs, the following baseline was discovered which provides a “ground” level of fitness that a person should possess if they want to do well at BUD/S. Here is the baseline:

The four “benchmarks” given above are what one Navy SEAL listed as his baseline level of fitness before entering BUD/S training, and he said that he did extremely well and consistently remained in the top performance percentages of his entire class, and eventually passed to have a 20-year career in the Navy SEAL teams.

So if we take these four basic exercises: running, pushups, pull-ups, and situps, and construct workouts around them, always keeping in mind the baseline level of fitness above, surely we would get close to fulfilling our maximum potential for physical fitness. Of course, it will take loads of will-power and self-motivation to continue training day after day toward this goal, but it’s already assumed you are a highly-motivated, fire-breathing, combat-focused individual since you are reading this article in the first place.

Here is an example of what might be considered an “intermediate” level workout constructed around our four basic exercises:

Note that we are doing pullups, which are performed with your palms facing away from your body, not chin-ups in which your palms are facing toward your body. (Chin-ups are easier than pull-ups and thus chin-ups are never performed at BUD/S!)

Many different workouts can be constructed around the four basic exercises given above, limited only by your imagination. But you should always try to keep the original Navy SEAL baseline in mind and aim for those numbers. Giving yourself a “PT test” once every month or two is also a good idea, just to see how you are progressing. As soon as you attain the number of reps and time given in the original baseline (or even get pretty close), it’s guaranteed you will be in extremely good physical condition!

Another primary thing most Navy Seals agree on is that you will have to be an excellent runner to do well in BUD/S training. Navy SEAL candidates literally run everywhere they go, covering numerous miles per day, which is a great thing to keep in mind if you are trying to get in good shape since the more running you do the less body fat you will have.

Once you have established a good level of fitness by training with the four basic exercises for, say, 2 to 5 months, you could try an advanced workout such as: “cumulative total in one day of all exercises”:

Then you would write down your reps and mileage after this circuit, then spend the rest of the day (working on-and-off with as much, or as little, rest between circuits as you wanted), repeating the circuit again and again and recording your results, attempting to accumulate as many reps in each exercise, plus as many miles as possible. After your last circuit of the day, you would total up and record whatever you were able to accomplish. Keep in mind that a Navy SEAL would be able to do roughly: 150 pullups, 400 pushups, 400 situps, and run 15 miles (plus swim about 6 miles) all in the course of one day.

How Many Pull-Ups Can the Average Person Do?