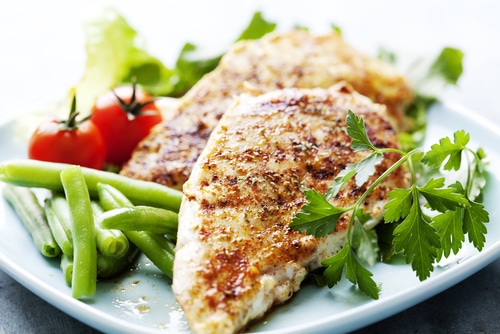 Losing weight’s only part of the battle – there’s also the challenge of keeping it off. Research shows that up to 90% of people who successfully lose a significant amount of weight gain all of it back – and sometimes more. Why is it so hard to keep fat from returning after you lose it? For one, studies show that resting energy expenditure slows down after weight loss so weight control becomes challenging unless you cut back your calories to compensate. There’s another factor to consider. According to a new study published in the Journal of the American Medical Association, the composition of what you eat after weight loss matters too.

When it comes to weight maintenance, a low-carb diet may have benefits over a diet lower in fat when it comes to keeping those extra pounds of body fat from returning to your waist and hips.

Researchers put 21 young and middle-aged overweight and obese individuals to the test. These individuals had recently lost almost 14% of their body weight by following a high-protein diet. The now lighter participants were assigned to one of three diets: a low- carbohydrate diet, a moderate-carbohydrate diet or a low-fat diet. The participants who ate the low-carb diet consumed only 10% of their calories from carbs, 30% from protein and 60% from fat. The low-fat group got 60% of their calories from carbs – and the moderate group 40%.

In this study, researchers were interested in the effect each diet would have on resting metabolic rate since a metabolic slow-down would make it easier to regain the weight they had lost. The results?

The Low-Carb Diners Experienced Other Health Benefits as Well

Not only did the low-carb dieters experience less of a reduction in resting metabolic rate, but their insulin sensitivity also improved. This bodes well for longer-term weight control. In addition, they had favorable changes in their lipid profiles. On the other hand, levels of the stress hormone cortisol rose as did C-reactive protein, a marker for inflammation.

Why Does a Low-Carbohydrate Diet Slow Down Metabolism Less after Weight Loss?

A low-carbohydrate diet may have benefits for weight maintenance, and, at least in this study, it had a favorable effect on insulin sensitivity and lipids, but did raise C-reactive protein the most of the three diets. C-reactive protein is a marker for heart disease risk. Other research suggests that low-carb diets may increase the risk of heart disease over a longer period of time. This applies mainly to people who follow diets where they consume larger amounts of fat.

A diet higher in protein and lower in carbs seems to be best for limiting the drop in resting metabolic rate that occurs after weight loss. On the other hand, more recent research raises concerns about following a low-carbohydrate diet for long periods of time. It’s possible that emphasizing more plant-based forms of protein like soy rather than animal-based foods and high-fat dairy foods would be a heart-healthier alternative.

Another option would be to consume moderate amounts of carbohydrates but choose low-glycemic ones that are higher in fiber like non-starchy vegetables rather than processed carbs and rapidly absorbed “white” foods like potatoes, white bread, and rice. Combine these healthier carbs with lean sources of protein. This type of diet would be favorable from a cardiovascular standpoint and would help stabilize blood sugars and prevent a reduction in resting metabolism.

If you’ve recently lost weight, consuming a diet high in protein and low in high-glycemic carbs may keep your metabolism percolating along better than one lower in protein and higher in processed, low-fiber carbs. Whatever you do, be vigilant. The pounds will sneak back up on you slowly if you become lax with what you eat and how much activity you get.