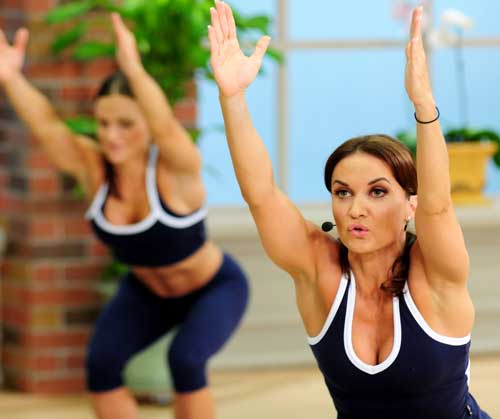 Yoga is enjoying a resurgence in popularity these days but yoga has been around since the sixth century B.C. What sets yoga apart from other forms of exercise is its emphasis not just on the physical aspects of exercise but on improving mental well-being as well.

For some people, yoga is the form of exercise they do on light days or recovery days, reserving the remainder of their workout time for resistance training and cardiovascular exercise. For others, yoga makes up a majority of their workout. No doubt, a yoga workout improves flexibility, balance, body awareness and is a good stress reliever, but can yoga moves make you stronger?

Can You Build Strength with a Yoga Workout?

According to research carried out at the University of Wisconsin at La Crosse Human Performance Lab, yoga does more than make you limber, flexible, balanced and calm. Researchers divided 34 healthy young women into two groups. One group did a 55-minute Hatha yoga class three times a week for 8 weeks. The second group did no exercise. Prior to beginning the classes, researchers tested the participants’ muscle strength, flexibility, endurance, balance, fitness level, and lung function and then repeated the tests at the end of the 8-week period.

As might be expected, the yoga participants were more flexible, especially in the trunk and shoulders, after 8 weeks of Hatha yoga. What’s more surprising is the women also experienced improvements in muscle strength and endurance and were able to do more push-ups and abdominal curls by the completion of the study. Based on the types of poses people do during a yoga workout, you might expect core strength to improve and upper body endurance to be better since you have to support your body using your arms for certain poses.

As a bonus, participants who did a Hatha yoga workout for 8 weeks were able to stand longer on one leg, suggesting improvements in balance. What didn’t improve was aerobic capacity, although you would expect yoga to have cardiovascular benefits since it helps with stress reduction. A study published in the European Journal of Preventive Cardiology supports this idea. It showed yoga improves a variety of risk factors for heart disease – lowers blood pressure, reduces BMI, lowers heart rate, and even decreases cholesterol and triglycerides.

In terms of energy expenditure, don’t count on a yoga workout to be a calorie scorcher, a 50-minute Hatha yoga session only burns around 144 calories, based on the results of one study. Still, research shows yoga is effective for weight loss, but probably not due to the calories burned. The practice of yoga makes you more mindful of how and what you’re eating and fosters self-control. By doing a yoga workout, you may find yourself making healthier food choices and develop a more positive relationship with food.

How Yoga Falls Short as a Strength Workout

You can make modest strength gains doing Hatha yoga poses only, but you’ll eventually be limited by the lack of progressive overload. With yoga, you’re using your own body weight as resistance and the stimulus on the muscles stays the same, although you can vary the resistance to some degree by changing hand positions.

If your goal is to maximize your strength or build muscle size, resistance training, working with bands, barbells or dumbbells are still the way to go because you can change the load you place on your muscles. What you can expect from yoga alone are improvements in core strength. In addition, a yoga workout can make you better at certain sports AND at weight training, while lowering your risk for injury, by improving your flexibility and balance. Other than stretching, yoga is one of the best ways to lengthen tight muscles and relieve muscle tension. Tight muscles make it harder to maximize your form when you lift and put you at greater risk for injury.

Another way a yoga workout falls shorts as a strength workout is it lacks benefits for bone health. When you do a strength workout using a resistance of 80% or more of your one-rep max, you’re pulling on your bones hard enough to encourage bone growth. With yoga, you’re placing tension on the bones but not enough to stimulate bone-producing cells called osteoblasts to spring into action. Yoga isn’t completely worthless for bone health, but it will only get you so far. While yoga isn’t particularly effective for building bones, it can reduce the risk of a hip fracture by improving balance.

There are forms of yoga that challenge your muscles more, one example being Ashtanga. Power yoga is another variation with more strength-training capabilities since many of the moves force you to hold your full body weight up numerous times throughout the workout. If you use little rest time between poses, you may also get some aerobic benefits.

Yoga is an effective way to get in touch with your body, improve flexibility and balance, relieve stress and lower your risk for heart disease. It helps build muscle strength/endurance, but it’s not the most effective way to build strength. It also falls short in its ability to improve aerobic capacity. You may have more muscle endurance after 8 weeks of yoga, but your cardiovascular endurance will likely be unchanged.

One way to get the benefits of yoga is to do a short session at the end of a strength-training session and do a longer yoga workout on a rest day. Yoga can be an excellent complement to strength training and a good contrast to explosive plyometric moves and HIIT training. Adding yoga to your routine will help you avoid the extreme fatigue that comes from doing high-intensity training. It’s a nice contrast that has some health benefits of its own, but irrespective of yoga, you need strength training to build lean body mass and compensate for the loss of muscle tissue that happens as we age. Do yoga but as a complement to weights.

American Council on Exercise. “Does Yoga Really Do the Body Good?”