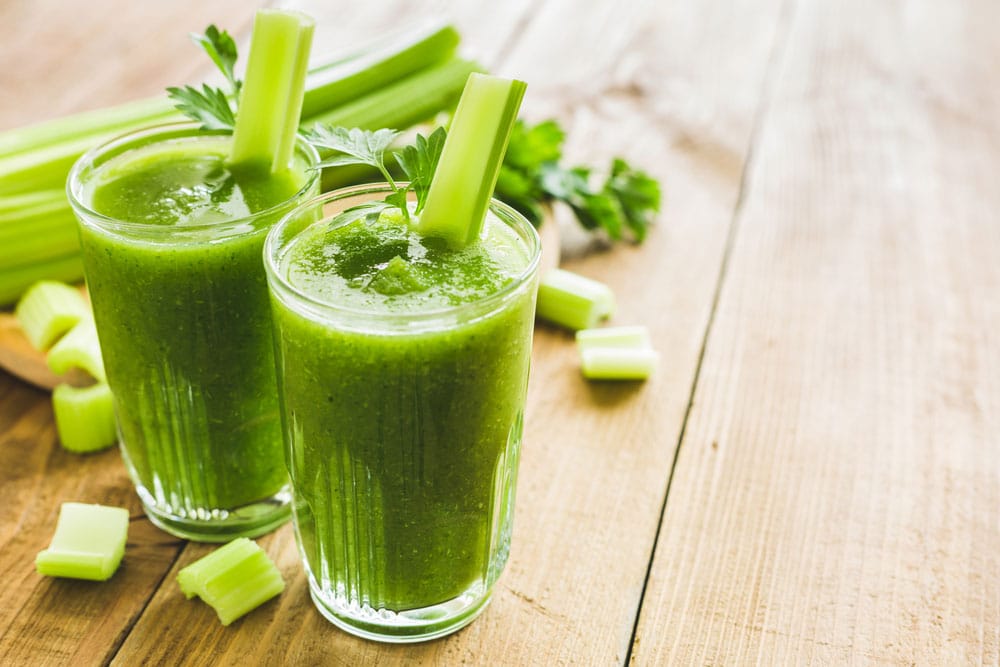 Food and diet fads come and go. Who can forget the cabbage soup diet or the grapefruit fad? The latest craze is sipping celery juice. People are drinking celery juice to lose weight and to reduce inflammation. Sometimes, it’s not clear where a food fad comes from, but the idea that celery juice has healing properties comes from a man who proclaims that he’s a medical medium, Anthony William.

It doesn’t appear that Anthony William has formal medical training. Instead, he says his insights on health and nutrition come from channeling with the spiritual world. Whether you believe this, the books he has written on the topic have been immensely popular, many of them achieving best-seller status. Plus, he tours the world promoting his views about nutrition.

One of the nutritional remedies Mr. William promotes is drinking at least 16 ounces of celery juice daily. He believes that doing so can cure or at least improve the symptoms of inflammatory diseases such as eczema, psoriasis, and more. As you might expect, the scientific community criticizes his belief, but it has still launched a celery juice fad that has yet to quiet down. Is there truth to what Mr. William says about celery and is there science to support the health benefits of celery and celery juice?

How Nutritious is Celery?

First, let’s look at the nutrients in celery. Is celery a nutrient-dense vegetable? Ninety to 95% of a celery stalk is composed of water, making celery one of the veggies with the highest water content. Yet celery stalks contain a moderate quantity of vitamins, minerals, and phytonutrients. Plus, celery is a good source of fiber. Like many green vegetables, celery contains substantial quantities of vitamin K. It’s also a good source of vitamins A and C and the mineral potassium. For example, three celery stalks supply almost a quarter of the day’s recommended vitamin C. Celery also contains substantial quantities of compounds like flavonols, phenolic acids, and furanocoumarins with antioxidant and anti-inflammatory activity.

Are these benefits enough to make it a superfood that by itself can reduce inflammation and optimize health? Many other vegetables contain this quantity of vitamins, minerals, phytonutrients and more. Celery also contains an anti-inflammatory compound called apigenin that has anti-inflammatory activity, according to studies in mice. In fact, apigenin seems to calm an overactive immune system. However, human studies are lacking and it’s a leap of faith to say that the amount of apigenin you get from eating celery or drinking celery juice can treat inflammatory diseases in humans.

Celery has other compounds that may have biological effects in human beings. For example, luteolin is a flavonoid abundant in celery. Preliminary studies show it cripples cancer cells and makes cancer chemotherapy more effective. Like apigenin, it also has anti-inflammatory activity. So, celery has phytonutrients with potential anti-inflammatory activity but its ability to suppress inflammation in humans is still under investigation.

Research also suggests that luteolin may have antioxidant or pro-oxidant activity, depending on how much you consume. So, getting too much apigenin could be harmful. Just as antioxidants fight free radical damage and protect cells, pro-oxidants have the opposite effect. They cause cell and tissue damage and fuel inflammation. The effects may be dose-dependent. One theory is that low doses of apigenin have anti-inflammatory effects while higher doses may increase inflammation.

The same dose-dependency applies to the anti-cancer effects of compounds like luteolin in celery. Under certain conditions, luteolin behaves as an antioxidant and protects cells from damage that can lead to cancer. But at higher or lower concentrations or under different conditions, it may damage cells by acting as a pro-oxidant. This could create conditions suitable for cancer to develop and thrive.

The Dose Matters Too

It’s hard to say whether the upside of consuming apigenin and luteolin outweighs the downsides. It may depend on the dose and the optimal amount isn’t clear. No one knows how much you need to consume each day to have an anti-inflammatory effect. Celery juice supplies a more concentrated source than eating the whole celery, but no one knows whether you can get enough by drinking celery juice to suppress inflammation or whether consuming more will have the opposite effect, increase inflammation and oxidative damage. Plus, when you drink celery juice rather than eat the whole stalk, you miss out on the fiber. That means your gut bacteria misses out on a source of nutrition and fiber is important for a healthy gut microbiome.

Another common claim about eating celery and drinking celery juice is that it helps the body detoxify. The best way to help your body eliminate toxins is to keep your kidneys and liver healthy since they’re the organs that do the bulk of toxin elimination. Eating a variety of fruits and vegetables gives your liver additional support by optimizing the enzymes it uses to break down toxins. Therefore, there’s nothing magical about celery. In fact, cruciferous vegetables, like broccoli, seem to offer the most benefits from this perspective.

Let go of the idea that there are one or more “miracle” foods that can transform your health. The real health benefits come from eating a variety of nutrient-dense foods and eliminating ultra-processed food and junk from your diet. There are no miracle cures or a fast track to good health. Optimal health comes from practicing healthy habits every day.

One problem with fads is they encourage us to eat a single food in abundance. This approach crowds out other healthy foods out of our diet. The real benefits come from consuming a diverse diet with a variety of fruits and vegetables. Plus, life gets monotonous when you drink celery juice all the time.

If you like the taste of celery juice, enjoy it in moderation, but don’t expect it to prevent or cure any disease. A better plan? Eat a rainbow of fruits and vegetables in all colors and shades, along with healthy fats and high-quality protein sources. That’s the secret to optimizing your diet!

One thought on “Is Celery Juice an Over-hyped Fad or Does It Have Health Benefits?”