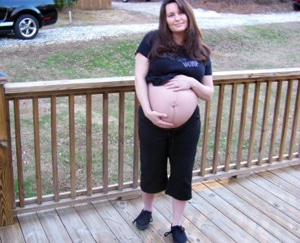 Before getting pregnant I weighed 102 pounds, worked out with my Cathe vids every day on top of teaching Martial arts! I had lost 60 pounds and felt great! In July of 2008 I found out that I was pregnant!! (2 days before my 10th anniversary- My hubby and I had tried for 10 years to have a baby with no success and just gave up trying and instead focused on building my body) we were so excited!

After seeing the doctor I continued to work and workout just with lighter weights until I hemorrhaged and had to take it easy! the baby

was ok but I had to stop all forms of exercise for the remaining of my pregnancy! that was at 14 weeks! needless to say I gained 74 pounds! yes! 74!! ha-ha as you can imagine I felt horrible! yes I did just have a precious little miracle baby that I was so blessed to have but at the same time I felt icky! I felt fat and so very unattractive!!

Well 1 week after giving birth I decided to start working out again so I starte d a slow walk on the treadmill and started back with Cathe’s weight workouts! I used no weights just my own body weight and eventually slowly started to add in light weights and her step aerobics! it’s now been 14 months since I gave birth and I can happily say that I have dropped 65 pounds and am back in my size 3 jeans!

I have roughly 20 or so videos of Cathe’s that I use and rotate out! so I never do that same workout twice in the same week! it helps keep me from getting bored!! I feel great and even better I love that my daughter loves to sit and watch Cathe as I workout! Thanks Cathe!!!

6 thoughts on “I lost the baby weight by Niki”