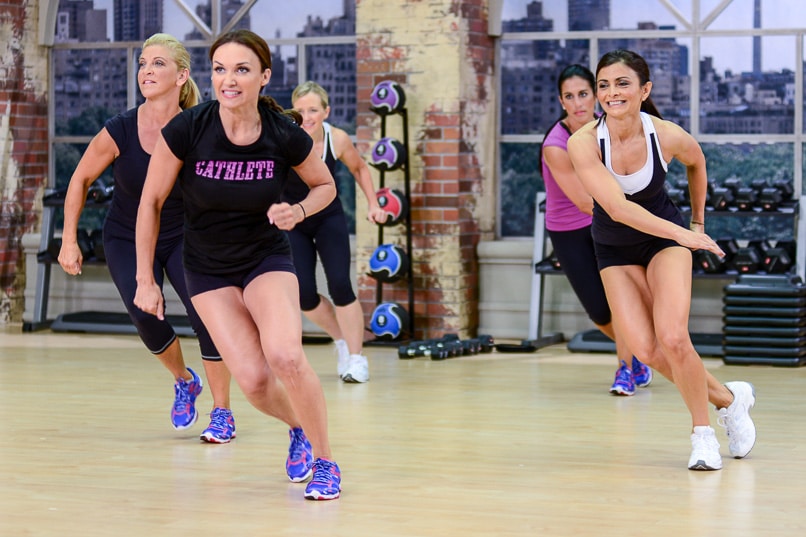 Ah! The myth of the fat-burning zone. At one time trainers advised clients who wanted to lose body fat to stay in the fat-burning zone when they do cardio. Treadmills and other aerobic exercise equipment are clearly marked so you could see if you are staying in the “zone” during your 30 to 60-minute workout. The fat-zone roughly corresponds to between 50 to 60% of your maximum heart rate, an exercise pace that’s relatively comfortable. Nowadays, we know that adding high-intensity intervals to a training routine can help you shed fat more quickly – but have you ever wondered WHY high-intensity exercise is more effective than longer periods of cardio in the fat-burning zone? Let’s find out.

Why High-Intensity Cardio is So Effective

There are a number of reasons why high-intensity cardio helps you shed more body fat. The argument for working out in the fat-burning zone goes something like this. At lower exercise intensities, your body burns a greater PERCENTAGE of fat for fuel. For example, when you work out at 60% of your maximum heart rate in the fat burning zone, around 60% of the fuel you’re burning is fat. When you increase the intensity to 90% of your maximal heart rate the percentage of fat you use as fuel drops to about 45% as your body starts to burn a greater percentage of carbohydrates – BUT you’re burning more TOTAL calories working out at a higher intensity. Even though the percentage of fat you use drops, it’s a smaller percentage of a BIGGER number. Ultimately, you’re burning more TOTAL fat calories when you work out at a higher intensity. To sum it up, the relative amount of fat you oxidize at a lower intensity is greater, but the absolute amount of fat oxidized is smaller relative to a high-intensity workout.

The Hormonal Response to High-Intensity Exercise

The fact that you’re burning a greater total number of fat calories during a high-intensity workout doesn’t take into account the additional fat-burning benefits you get after a high-intensity workout is complete. When you work out in the fat-burning zone, you release adrenaline from your adrenal glands in response to the stress of exercise. Adrenaline, also known as epinephrine, helps your body mobilize fat to be used as fuel. During high-intensity exercise, you also release adrenaline but much more than when you’re exercising in the fat-burning zone since the stress you’re placing your body under is greater. This works in your favor if you’re trying to lose body fat.

High-intensity exercise is also superior for activating other fat-burning hormones like testosterone and growth hormone. Long periods of cardio in the fat-burning zone can actually depress levels of sex hormones like testosterone and estrogen. Plus, you release growth hormone when you work out above your anaerobic threshold during high-intensity interval training. In addition, long periods of moderate-intensity cardio elevates cortisol levels more. This can lead to muscle breakdown, especially if you’re not fueling yourself properly. Because high-intensity exercise is more stressful on your body, it leads to greater release of hormones that mobilize fat.

High-intensity exercise also improves insulin sensitivity more, making cells more sensitive to insulin. This helps with glucose control and controlling your body weight since your pancreas has to pump out more insulin when cells are less sensitive to insulin. Higher insulin puts the brakes on fat breakdown. Why do you get greater improvement in insulin sensitivity with high-intensity exercise? It may be because you’re using so many more muscles during a high-intensity workout compared to taking a leisurely jog on the treadmill.

When you work out at a high-intensity, your body incurs an oxygen depth that it has to make up for after you finish exercising – so there is a greater EPOC (excess post-exercise oxygen consumption) after high-intensity exercise. That’s because your body has to work harder to lower your body temperature and heart rate, resynthesize creatine-phosphate and ATP and normalize breathing. Plus, your liver has to convert lactate back to glucose. All in all, your body expends significantly more energy AFTER a high-intensity workout compared to a workout in the fat-burning zone.

High-Intensity Workouts May Be Better for Preserving Lean Body Mass

Very long periods of moderate-intensity cardio combined with calorie restriction has a catabolic effect on muscle tissue due to a more sustained rise in cortisol. As cortisol levels rise, you begin to use a higher proportion of amino acids from muscle tissue as fuel. Normally, protein use as a fuel source is low but it increases as glucose and glycogen stores drop. Your liver is able to convert the amino acids from protein to glucose through a process called gluconeogenesis. It does this to preserve glucose levels and carbohydrate stores during long periods of exercise. When you keep your workouts shorter and more intense, you don’t deplete muscle and liver glycogen stores as much as when you do long periods of cardiovascular exercise. High-intensity exercise also releases cortisol but you also get a much greater release of anabolic hormones like testosterone and growth hormone that help to preserve lean body mass. So you get some compensation for the negative effects of cortisol.

You ultimately burn more fat when you increase the intensity of your cardio workout. Your body will eventually adapt to exercise at a moderate intensity and become more efficient so you’ll burn fewer calories. That’s when you reach a plateau. Adding a few sessions of high-intensity interval training each week can help you avoid a plateau and add some interest to your workout as well. After all, there’s nothing stimulating about exercising at the same pace for an hour.

So grab some DVDs, like my new X10 workouts, that guide you through a high-intensity workout and take the challenge. Even though high-intensity workouts are tougher, many people prefer them because they’re more stimulating and you can work out a shorter amount of time and still get the benefits. The take-home message? Break out of your cardio rut and make some new gains by upping the intensity.

How To Get Fit With 3 Minutes Of Exercise A Week: BBC Doc Tries “HIT”

Can Cortisol Sabotage Your Muscle Growth?

One thought on “Hormonal Response to High-Intensity Training: Why It Burns More Fat”