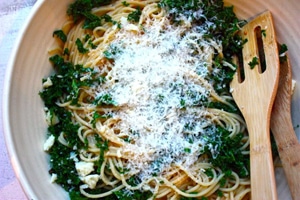 1.5 teaspoons of salt, plus more for salting the pasta water

Pinch of red pepper flakes, omitting if your kids are eating it

2-3 Tablespoons of fresh-squeezed lemon juice or to taste

¼ cup pecorino, finely shredded (I like to use a microplane)

Add the kale to a bowl and add the 1 teaspoon of salt (don’t salt too much here as the pecorino is salty, and you can always add more later), black pepper, olive oil and lemon juice, and red pepper flakes.

Toss the kale with the dressing and put it off to the side while you cook your pasta. Letting it sit for a while in the vinaigrette will help it soften a little.

While your kale is softening, bring a large pot of salted water to boil. Make sure your water is salty like the sea!

When boiling, add your spaghetti and cook according to the box directions until it’s done (generally few minutes).

When pasta is done, reserve a cup of the cooking water, and then drain the pasta.

Add the pasta to the bowl with the kale, and toss together.

To moisten, add some of the pasta cooking water to the pasta, a few tablespoons at a time.

Add most of your shredded cheese to the dish, and toss.

Add the rest of the cheese to the top and serve.