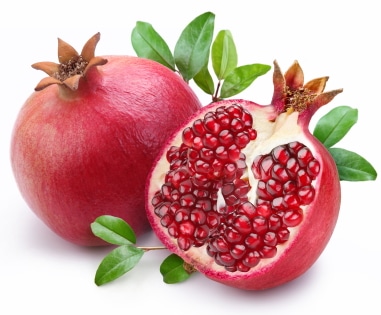 The brilliant red pomegranate fruit has received much fanfare in the last few years because of its many health benefits. Although this fruit has only recently entered the spotlight, pomegranates have been cultivated for more than 4,000 years. There are biblical references to this ancient fruit, and Homer mentions it in the epic poem The Odyssey. Some scholars even believe the pomegranate was the forbidden fruit in the Garden of Eden. The pomegranate tree is native to Persia and is cultivated throughout the Mediterranean region. In the modern day, it’s also grown in Mexico, Hawaii, Arizona, and parts of California.

An Ancient Fruit Grows in Popularity

What Are the Health Benefits of the Pomegranate Fruit?

How Pomegranate Fruit Benefits the Heart

The ellagitannins and other polyphenols in pomegranate have another benefit. Preliminary research shows pomegranate juice reduces the oxidation of LDL-cholesterol, the “bad” form of cholesterol that’s linked with heart disease. Oxidation of LDL-cholesterol is one of the first steps in the sequence that leads to arterial plaque and heart disease. The polyphenols in pomegranate juice also lowers systolic blood pressure by blocking the action of an enzyme called angiotensin-converting enzyme that causes arteries to constrict.

Other Health Benefits of Pomegranates

Other research suggests that pomegranate juice has anti-viral and anti-bacterial benefits that help ward off the common cold and flu viruses. Compounds pomegranate may help in the fight against gum disease by keeping mouth bacteria that contribute to plaque and gingivitis in check. There are also ongoing studies looking at the anti-cancer benefits of the pomegranate fruit. Preliminary research shows it may stop some types of cancer from spreading, particularly prostate cancer. Pomegranate extract is also being added to some skin care products because it protects against sun damage.

Other Nutritional Information about Pomegranates

Pomegranates contain almost no fat, but they are high in natural sugars, and they’re not as low in calories as some fruits. A whole pomegranate has 234 calories and 39 grams of sugar. Surprisingly, despite their high sugar content, they may be beneficial for diabetics. Researchers point out that the sugars in pomegranate are attached to antioxidants and may not have the same effects as free sugars on blood sugar levels.

How to Get the Benefits of the Pomegranate Fruit

Pomegranate juice is sold in many health food stores and natural food markets, and you can buy whole pomegranates at some supermarkets. Pomegranate juice can vary in flavor from sweet to tangy depending upon the number of tannins it contains. Drink it as is, add it to smoothies or use it to make salad dressings and sauces. You can also purchase dried pomegranate seed casings called arils. Sprinkle them on ice cream or spoon them into yogurt. You can also add them to your morning bowl of oatmeal for additional antioxidant power. Enjoy the many health benefits of this ancient fruit.

Can an Ingredient in Pomegranates Fight Muscle Aging?