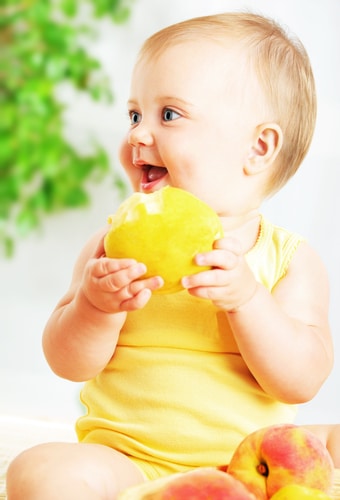 What if babies were born with a taste for nutritious fruits and veggies rather than the super-sweet foods that most kids enjoy? That would certainly make it easier to get kids to eat foods that are good for them. If kids loved eating fruits and veggies, imagine what an impact it would have on the growing rate of childhood obesity. The time to begin exposing kids to healthy foods is early. How early? According to some research, while they’re still in the womb.

Do Preferences for Healthy Foods Begin in Utero?

To test this idea, researchers had one group of pregnant women drink carrot juice each day over the course of their pregnancy. Another group drank carrot juice only during breastfeeding while still another drank none at all. After the babies were born and began eating solid food, the infants exposed to carrot juice in utero preferred eating cereal made with carrot juice over cereal made with water and they ate more of it. Sounds like a good reason to munch on lots of colorful veggies when you’re pregnant, doesn’t it? This may help your growing bundle of joy appreciate the taste of vitamin, mineral and antioxidant-rich food over processed foods and sugary beverages.

Research shows taste buds develop in babies at around two months of gestation. Each day they swallow amniotic fluid that takes on the flavor of whatever their mom chooses to eat. By the time a baby is born, its sense of taste is the most developed of any of its senses. The average baby has an innate preference for sweet foods since sweet implies a source of readily available carbs that can be used for energy. Babies also have a negative reaction to sour or bitter foods. Despite this preference for sweet over sour of bitter, food preferences are partially shaped by what a developing baby is exposed to early in life. Want them to eat veggies later? Then eat veggies yourself.

It’s not that kids can’t develop an appreciation for healthy foods if they weren’t exposed to them in the womb – it just makes it easier if they’re exposed to them early. Starting around the age of 18 months and up to about 2 years of age, babies develop a fear of new foods and flavors, making it difficult for them to accept foods they weren’t exposed to earlier. Research shows the food preferences babies form during the first few years of life are lasting. The earlier babies are exposed to healthy foods, including in utero, the more likely it is they’ll form a taste for those foods. This adds a whole new reason for eating healthy during pregnancy.

Research carried out at the University of Adelaide in South Australia showed kids exposed to “junk food” during pregnancy developed a taste for high fat, sugary foods. Plus, kids whose moms munched on processed foods and sipped soft drinks were more likely to have kids with behavioral problems like aggression, anxiety, and depression. There’s little doubt that diet has an impact on mental health by altering neurotransmitters that impact mood.T hese influences seem to begin very early in life and even in utero.

Food preferences are shaped early in life, even in utero. One more reason to eat a healthy diet rich in fruits, vegetables, healthy fats, and lean protein and avoid processed foods and sugary foods and beverages during pregnancy. Doing this gives your future baby a “head start” from a nutritional standpoint, making it more likely they’ll accept and even prefer eating a healthy diet. Food preferences, once formed, are challenging to change. So eat right throughout your life and pass your love of healthy food onto your kids. They’ll be better for it.

News Medical. “Child’s food preferences could be determined in the womb: Study”

One thought on “Food Preferences: A Taste for Healthy Foods Forms Early”