Enriched Flour: What It Is and Why You Should Avoid It

Enriched Flour: What It Is and Why You Should Avoid It 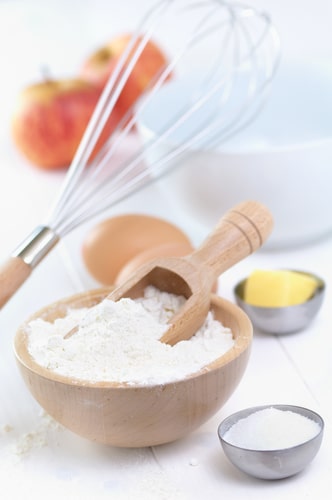 When you read the ingredient list of supermarket products, you’ll see many contain enriched flour. Enriched flour is flour that has had vitamins and minerals, usually, niacin, riboflavin, folic acid, thiamine, and iron, added to it. This sounds like a good thing. After all, you’re getting B-vitamins and iron when you eat foods made with enriched flour – but what sounds healthy isn’t always. Here’s why.

Enriched Flour is Flour That’s Been Processed and Refined

The reason enriched flour has nutrients added is that they were removed during processing of the grain. To make flour, manufacturers process the grain in a way that removes two portions called the bran and the germ. Bran is the fiber-rich portion that contains protein and a variety of minerals. The germ is rich in B-vitamins and minerals that are essential for health. What’s left after processing is the portion called the endosperm. The endosperm has nutritional value, being a source of protein, carbohydrates, B-vitamins, and iron, but it undergoes still further processing to create a fine powder. During this process, it loses even more of its vitamins and minerals.

The Benefits of Whole Wheat Flour over Enriched White Flour

Processing grains to make white flour removes most of the fiber. In fact, whole wheat bread has three to four times the amount of fiber as enriched white bread. Why is this important? When you strip grains of their fiber, they become mostly starch and are rapidly digested and absorbed. This creates a more rapid rise in insulin levels that send your blood sugar levels on a roller coaster ride. Plus, it deprives your body of the benefits of fiber, a dietary component that most people don’t get enough of. Soluble fiber helps to reduce cholesterol and lower the risk of heart disease. It also helps you feel fuller after a meal. In addition, white flour is bleached through various means, including the use of chlorine gas. This produces by-products, including a compound called alloxan that destroys insulin-producing cells in the pancreas of animals. No one knows if they tiny amounts that remain in flour after bleaching are a health threat to humans or not.

Be Informed When Shopping for Bread and Pasta

Look for bread that is 100% whole wheat or 100% whole grain. Don’t be fooled by the term “enriched wheat flour.” This means it’s made primarily from white flour with a small amount of whole wheat added. Wheat flour, without the “whole” in front of it, is made from milled wheat that’s devoid of the nutrient and fiber-rich portions of the grain – the bran and germ. “Unbleached” is another term to be wary of. Just because flour is unbleached doesn’t mean it’s made from whole wheat flour.

Choose 100% whole wheat or whole grain products, and avoid grain enriched products that have been processed. It’s a healthier choice.