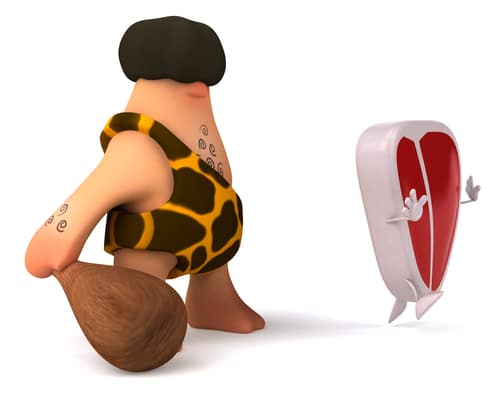 You hear about it everywhere: in gyms, in magazines, in the break room at work. People talk enthusiastically about losing weight, increasing energy and feeling younger. The paleo diet is the buzz word of the day.

So what, exactly, is this strange new way of eating?

As it turns out, it isn’t a new way of eating at all. Proponents of the paleo diet advocate looking back – way, way back – and choosing foods similar to what our paleolithic ancestors would have eaten. Imagine a family of cave people hanging around a campfire, sharing a meal and gossiping about Og who lives in the next-door cave. What do you think that they would have been eating? Meat, veggies and fruit? Sounds about right! Crackers, chocolate cake and microwaved burritos? Not so much.

If you want to eat like Og, you’ll choose unprocessed foods that you can recognize and pronounce. Your food’s source will be pretty obvious. Lettuce, for example, is obviously a plant and an egg obviously comes from a bird; there’s really no mistaking them for something that they’re not. On the paleo diet, veggies are good for you and chocolate cake isn’t. That’s hardly a revelation, right?

The differences between conventional nutritional advice and the paleo diet become more obvious when you consider what the paleo diet doesn’t include. Dairy, beans and whole grains – major players in conventional food guides – are all out on the paleo diet. They were hard to process and difficult to digest; Og the next-door caveman wouldn’t have eaten them at all.

Of course, we live in a modern world with modern conveniences. Og would have had to hunt a wooly mammoth and gather wild plants to make his supper. Even the staunchest paleo believer wouldn’t be able to replicate Og’s meal. But we can choose foods inspired by what our paleolithic ancestors would have eaten.

So what can you eat on paleo diet?

• Meat. Grass-fed and organic when possible. Pastured meat has more Omega-3 than feedlot meat and is therefore better for your health. If you don’t have access to grass-fed meat – or if it’s too expensive – then remember that your conventional beef is still far superior to a slice of greasy pizza or a bowl of sugary cereal.

• Fish and shellfish. Wild-caught when possible.

• Vegetables. All kind of vegetables! Fill your plate with every colour of the rainbow. Don’t forget green leafy vegetables like kale, spinach and broccoli; they’re the powerhouses of the plant world.

• Fruit. Some paleo followers choose to limit their consumption of sugary fruit, while others allow themselves unlimited fruit. Experiment and see what works best for you.

• Nuts and seeds. Natural and unsalted are best, since roasted nuts can be very high in sodium. Peanuts are a legume, not a nut!

And that’s pretty much it! Some paleo followers include full-fat dairy or butter, others swear by coconut oil, some differ on whether they include coffee or alcohol in their diets. But at its core, paleo is simply this: meat, fruit, veggies, nuts, fish, eggs.

Whether or not you choose to adopt a paleo lifestyle, there are some simple things that you can take away from the paleo diet: eat fresh, unprocessed foods and include lots of plants in your diet. Paleo’s focus on nutritious and beautiful ingredients leaves lots of room for experimentation – without having to go mammoth-hunting.

Workout Like a Caveman: Exercise to Complement the Paleo Diet

3 thoughts on “Eat Like a Caveman: The Paleo Diet”