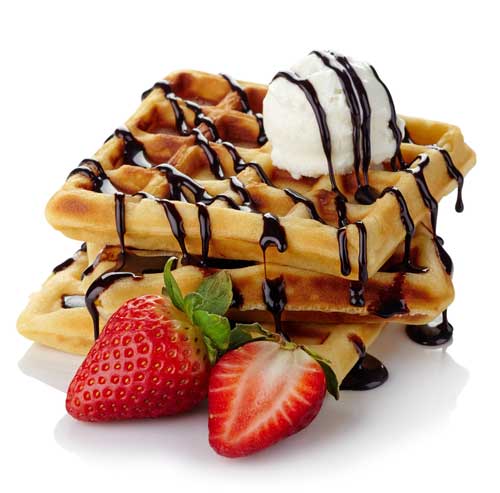 Dessert’s back on the menu – as long as you eat it for breakfast. Dessert for breakfast? It sounds like the ultimate dietary “no-no,’ but, according to a recent study, it may work in your favor if you’re watching your waistline. This study, published in the journal Steroid, found that obese participants who ate a dessert item with their morning meal lost more weight than those who didn’t indulge their sweet tooth. Surprised?

If You Have to Eat Dessert, Breakfast is the Best Time

In this study, researchers assigned obese men and women to a diet containing a similar number of calories. The only difference was the composition of what they ate for breakfast. One group ate a 300-calorie high, protein low-carb meal first thing in the morning. The other group ate a 600-calorie breakfast that was high in protein but included a chocolate dessert. All total for the day, the men in the study ate 1,600 calories, while women ate 1,400 calories to promote weight loss.

Initially, both groups lost similar amounts of weight, but half-way through the 32-week study, the dieters who ate the low-carbohydrate breakfast without dessert began regaining the weight they had lost. In fact, they regained an average of 22 pounds. The breakfast dessert eaters fared significantly better. Not only did they not put back on the weight they had taken off, but they also shed another 15 pounds, on average. By the end of the study, the participants that ate dessert lost on average 40 more pounds than the participants who didn’t eat dessert.

Reduce Cravings By Eating Dessert Early in the Day?

Intuitively, it doesn’t make sense. After all, dessert is one of the first things you give up when you’re trying to slim down. So, why did the dessert eaters fare so well? Researchers believe the participants that didn’t eat morning dessert felt less satisfied and had more cravings, so they cheated by eating more later on in the day. In contrast, the dessert eaters had less desire to eat sugar and carbs because they satiated their “sweet tooth” at breakfast. When researchers measured ghrelin levels in both groups, those who started the morning with a high-protein breakfast topped off with dessert had lower ghrelin levels, as measured by blood tests than those who ate breakfast without dessert. Gherlin is a hormone that ramps up appetite. Consistent with the findings, participants who had lower ghrelin levels, the dessert eaters, also felt less hungry later in the day.

Starting the Day with Dessert – Good or Bad Idea?

Does this mean you should eat dessert for breakfast? It depends. If you simply MUST eat dessert, breakfast is the best time. Some people who reduce the number of processed carbohydrates and sugary treats in their diet lose their taste for them and have fewer cravings. For these people, completely avoiding sugar, including dessert, is the best approach to keep those cravings in check.

Other people experience cravings for sweet things even when they’re on a low-carb diet. If you fall into this category and feel like you’re “missing out” if you don’t have something sweet, eating dessert first thing in the morning when your insulin sensitivity is highest and you’re the most active, makes it less likely you’ll store simple sugars as fat.

If you do an early morning workout before breakfast, a high-protein meal with dessert sends amino acids into the muscle cells you’re just worked, and the glucose replenishes muscle glycogen stores and helps your muscles recover. Eating protein with simple sugars also helps moderate the spike in insulin that comes with eating something sweet.

Whether you eat dessert in the morning or not, make breakfast a high-protein meal to help curb your desire to snack later in the day. Studies show that first morning meals that are high in protein suppress ghrelin, and appetite, more than high-carb ones. Protein rules when it comes to keeping you satisfied!

Eat Dessert with a High-Protein Meal

Before adding a decadent dessert to your morning meal, cut back on carbs and sugar for three months and see if it reduces your cravings. You may discover that you no longer yearn for sweets like you once did. When you do eat dessert, combine it with a source of protein.

Redefine what you think of as dessert – it doesn’t have to be a doughnut or a candy bar with 28 grams of sugar. Choose something that has nutritional value. A cup of plain yogurt sweetened with fresh fruit or a scoop of cocoa powder in your oatmeal satisfies a sweet craving while supplying your body with probiotics (from the yogurt), protein, fiber, and antioxidants.

How about enjoying the natural sweetness of an apple or a bowl of fresh berries rather than a dessert made with white flour and sugar? Whip up a high-protein smoothie sweetened naturally with fruit for a taste of something sweet that’s still waistline friendly. For healthy fat, add flaxseed or chia seeds. Think differently about what constitutes dessert – it doesn’t have to be a pastry, cookie, brownie or something with a long list of ingredients that comes in a package.

Breakfast and after a workout are two of the best times to eat something sweet, but choose something naturally sweet with nutritional benefits, like fruit, and eat it with a protein-rich meal to curb hunger, tame cravings and stay satisfied for hours. The best time to eat dessert is early in the day and after a workout when your body is best equipped to use the calories as energy – if you eat dessert at all.

5 Ways to Add Breakfast Vegetables to Your Diet.