Does the Diet You Eat Alter Your Genes?

Does the Diet You Eat Alter Your Genes? 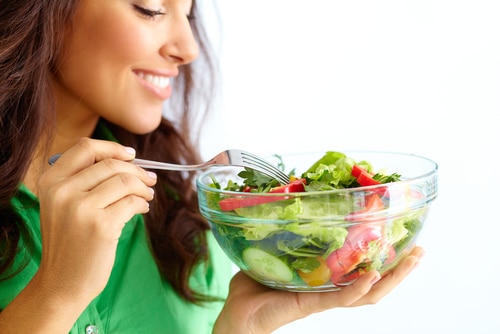 Genes, sequences of DNA, are the blueprints that determine what proteins your cells make. In turn, these proteins direct a variety of activities from the function of your immune system to the quantity of hormones you release. They also determine what you look like, whether you have red hair or blonde, blue eyes or brown. They even play a role in your behavior. Genes are pretty important stuff – but are they destiny?

At one time, people thought that genes really didn’t change much except through mutations but we now know this is incorrect. In fact, a whole field called epigenetics centers around the idea that gene expression can be changed based on environment. In other words, just because your you’re at risk for a particular health problem, the DNA associated with that disease may not be expressed. That means you have more control than you think over your genes, at least when it comes to their expression. That’s where lifestyle factors come into play and why it’s so important to do the “right thing” from a lifestyle standpoint.

So what determines whether you express the “bad” genes you inherited from your parents? Diet, for one. What kind of diet is best for preventing expression of genes that put you at risk for health problems like cancer and heart disease? Unfortunately, you can’t always generalize since each person is a little different – but a recent study offers some interesting insights.

Researchers at the Norwegian University of Science and Technology wanted to know what type of diet is most effective for preventing the most common diseases related to lifestyle, diseases like heart disease, cancer, type 2 diabetes and Alzheimer’s disease. To get a better idea, they placed a group of healthy but slightly overweight people on different diets and looked at how each impacted the expression of their genes.

Of the diets they tested, a diet high in carbohydrates (65% carbs) increased the expression of genes associated with inflammation the most. In fact, they found diets made up of greater than 40% carbs boosted expression of inflammatory genes. A high-carbohydrate diet had a pro-inflammatory effect even when the participants didn’t overeat or consume too many calories. Why is this concerning? Inflammation has been linked with a number of chronic diseases of aging including cancer, type 2 diabetes, heart disease and Alzheimer’s disease.

Why would a carb-rich diet “turn on” genes linked with inflammation? Carbohydrate-rich diets increase insulin levels more than diets high in protein. Insulin activates inflammatory genes, leading to low-level, smoldering inflammation that puts you at greater risk for health problems. People with insulin resistance have low-grade inflammation going on that partially explains why they’re at higher risk for healthy problems like heart disease, cancer and Alzheimer’s disease. Low-grade inflammation has been linked with each of these diseases. The good news? It looks like the genes that control for inflammation may or may not be expressed based on the type of diet a person eats.

Of course, there are other factors that contribute to insulin resistance. We now know that fat cells secrete hormone-like substances that decrease insulin sensitivity. That’s one reason being overweight or obese is such a strong risk factor for insulin resistance. Fat cells are more than just storage depots – they actively produce hormone-like compounds. Some of these compounds are also pro-inflammatory.

Not All Carbohydrates Are the Same

Of course, not all carbohydrates are the same when it comes to the expression of inflammatory genes. The real culprits are processed carbs and carbs that are rapidly absorbed because they’re low in fiber. Fiber-rich carb sources like vegetables and moderate amounts of whole fruits have anti-inflammatory effects because they’re a rich source of natural antioxidants that reduce low-grade or “silent” inflammation.

It’s empowering to know you have some degree of control over your genetic code. You were born with certain genes but the diet you eat and the lifestyle you live impacts expression of them. Genes have the ability to be down-regulated or turned off based on the environment they’re exposed to. Through they’re still there, they’re not being expressed.

What does this mean? Just because heart disease runs in your family doesn’t mean you’re destined to get it. By making healthier dietary and lifestyle choices, particularly exercise, these genes may not be expressed. Pretty empowering stuff. The key, of course, is to make the right choices. That’s up to you.

Science Daily. “Feed Your Genes: How Our Genes Respond to the Foods We Eat”

Nutrigenomics: Why You Really Are What You Eat

Can the Diet You Eat Affect Your Genes?