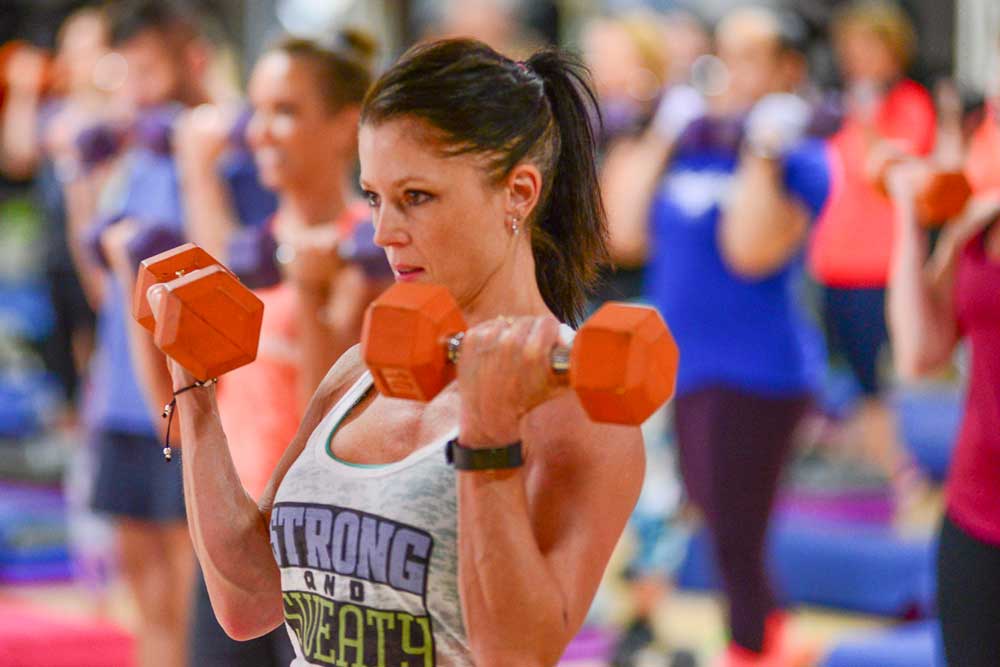 Almost everyone has some degree of DOMS when they first start working out, especially strength training. But, your muscles adapt to the stress you place on them and it’s unlikely you’ll experience further delayed muscle soreness until you change your workout or do movements your body isn’t accustomed to. For example, when you introduce a new exercise into your workout, increase the resistance or volume for an exercise, or add an advanced training method, you may feel the old, familiar stiffness and discomfort again. DOMS is most common after a bout of eccentric exercise, movements where you’re lengthening the muscle against resistance.

What do you do when your muscles are sore and achy? Some dedicated people push through and do a full workout despite feeling sore. But, is this a good approach? More importantly, does exercising with DOMS increase the risk of injury?

Surprisingly, we still don’t completely understand what causes delayed onset muscle soreness. One explanation is that the soreness and stiffness come from microtrauma to the muscle fibers you worked. In response to a challenging workout, the muscle fibers get stretched and small tears form in the fibers. In turn, your body reacts to the damage. Some sources suggest there’s an inflammatory component to DOMS. The microtrauma to the muscle triggers the release of chemicals that cause inflammatory cells to enter the area. The inflammatory cells then produce and release cytokines that elicit pain.

Other sources suggest that DOMS isn’t due to microtrauma to muscle fibers but is instead a type of metabolic stress. Other experts believe DOMS is neurological in nature. The lack of a clear understanding shows how little we actually know about delayed onset muscle soreness, despite it being so common. What is clear is that DOMS is usually self-limited and is most pronounced with eccentric exercise. With DOMS, you typically experience muscle pain and stiffness for a few days up to a week before it gradually resolves. It’s quite distinct from rhabdomyolysis, a life-threatening condition marked by severe damage to the muscle.

With rhabdomyolysis, also known as rhabdo, the muscle is damaged to the point that muscle proteins are released into the bloodstream. These proteins make their way to the kidney where they can clog up the organ and lead to the sudden onset of kidney failure. This is a relatively rare condition you see in people who do very intense exercise. There also seems to be a genetic predisposition to developing rhabdo. Yet, there are sources that believe that delayed onset muscle soreness could actually be a mild form of rhabdomyolysis, although this is unproven.

Does DOMS Increase the Risk of Injury if You Keep Training?

Back to the bigger question – should you train on the first day or two after the onset of DOMS? If you’re stiff and sore, it might be harder to use good form when you strength train. Theoretically, this could increase the risk of injury. If you try to run when your legs are stiff and sore, might not your risk of falling, or injuring yourself be greater?

There is some evidence that, at the very least, DOMS may reduce exercise performance. In fact, a study showed that delayed onset muscle soreness reduces running economy and can alter running biomechanics. If you alter running biomechanics, you would expect the rate of injury to be higher. Plus, this study also showed that delayed onset muscle soreness can impede the refilling of glycogen stores in the muscle. So, you may have less available glycogen for fuel.

Also, with severe DOMS, research suggests you can experience a reduction in strength and power. That, too, could increase your risk of injury during certain activities and when you strength train. Plus, you probably won’t get as much out of your workout since strength and power are reduced.

How about Lightening Up?

With severe DOMS, your risk of injury is likely higher as the pain can alter biomechanics and reduce strength and power performance. However, most people aren’t willing to stop training for a week, the length of time it may take for the muscle soreness to completely go away. The best approach might be to lighten up on your workout during the first few days when you’re sore and stiff. If you work with weights, decrease the resistance and do higher reps.

You might even switch your workout to something more relaxing, like yoga, or do a low-impact, low-intensity workout until some of the pain resolves. In fact, doing a form of light exercise, even if you’re experiencing pain, is usually more beneficial than doing nothing. DOMS often feels better once you start moving around and blood flow increases to your muscles. The best way to approach DOMS isn’t to move as little as possible since your muscles will usually feel better once you warm them up.

Delayed onset muscle soreness is inconvenient and annoyingly uncomfortable but it’s a phenomenon you’ll encounter if you push yourself hard. You might be tempted to skip your workout the first few days completely or push through the pain. Neither is a good approach. Instead, modify your workouts based on your level of discomfort. If the pain isn’t particularly bad, keep lifting but do low weight and high reps. If the pain is quite uncomfortable, consider a yoga or stretching session rather than lifting or doing high-intensity training. Whatever you do, make sure you do a thorough warm-up to get the blood flowing to your sore muscles beforehand.