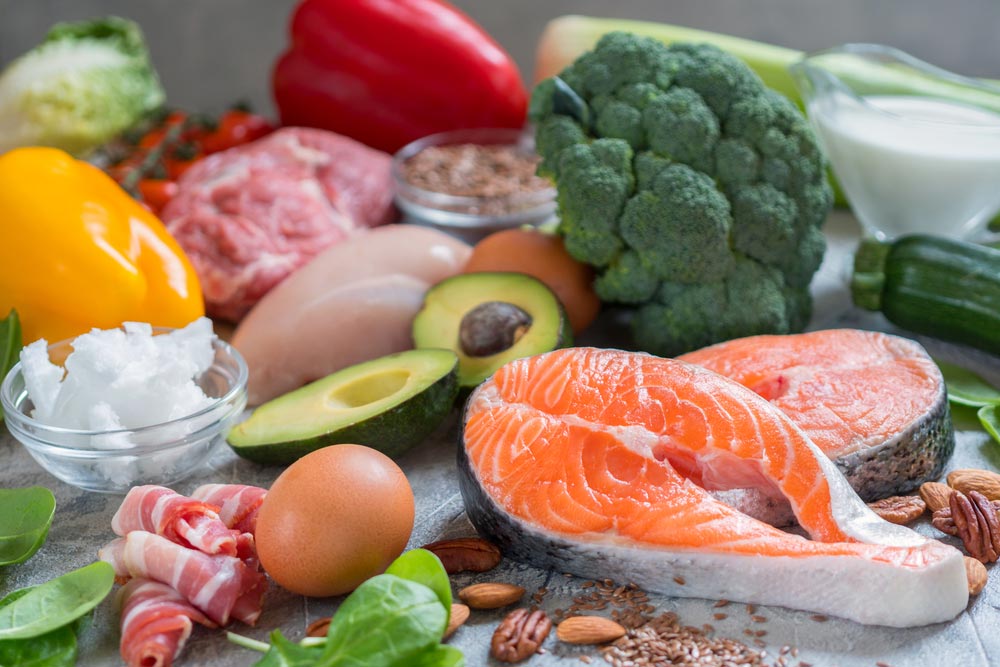 The most common reason people go on a low carbohydrate diet is to lose weight. Is it justified? Some studies show that you lose weight more quickly on a low carbohydrate diet relative to one that’s low in fat, although some of the weight loss initially is glycogen and water. While going low carb might give help you lose more weight short term, most studies show that in the long run, both low-fat and low-carb diets lead to similar amounts of weight loss.

Despite clear evidence that low-carb diets are superior for weight control, low-carb diets, including very low-carb ones are still popular. But, once you drop your carb intake below around 50 grams per day, or when carbs make up around 10% of your diet, your body enters nutritional ketosis where it breaks down fat to form ketone bodies. Ketone bodies serve as an alternative fuel source when glucose is in short supply. Over time, your body becomes fat adapted, meaning it turns to fat and ketones as a fuel source over carbohydrates.

To enter nutritional ketosis, you reduce the number of carbs you eat, initially to 50 grams of carbs or less, consume high-quality protein, and substitute the carbs you normally eat with fat.  So, a low-carb diet is still relatively high in protein but contains more fat than a more balanced diet, like a Mediterranean diet. Also, there are various degrees of low carb. A ketogenic, low carb diet with 50 grams of carbs or less daily is at one end of the spectrum. A more moderate, low-carb diet, keeps the percentage of carbs at around 20% of total calories or between 100 and 125 grams of carbs daily. This would be a low-carb diet without nutritional ketosis.

If you’re trying to lose weight, you might be tempted to give a low-carb diet a try. But, what if you weight train to build muscle? You may have read that carbohydrates have a protein-sparing effect, meaning they prevent muscle breakdown and conserve muscle tissue, especially when you’re cutting calories to lose weight. Plus, carbohydrates trigger the greatest release of insulin, an anabolic hormone. Not supplying your body with sufficient carbohydrates would seemingly be detrimental to your body composition as your body could break down muscle to use the amino acids as fuel, especially during exercise.  Your liver can convert amino acids from protein to glucose through a process called gluconeogenesis.

The book the Art and Science of Low Carb Performance by Jeff S. Volek Ph.D., RD and Stephen D. Phinney Ph.D., MD calls the necessity of carbs for building muscle into question. Some studies show that ketones can be oxidized similarly to amino acids and help protect against muscle protein breakdown. If that’s the case ketones have a protein-sparing effect similar to carbohydrates. Plus, a low-carb diet is relatively high in protein and when you have plenty of branched-chain amino acids around, particularly leucine, it turns on muscle protein synthesis. Insulin levels are low when you’re on a low-carb, ketogenic diet and that might seem detrimental since insulin is an anabolic hormone that increases muscle protein synthesis. But, research suggests that leucine acts on the insulin pathway to boost muscle protein synthesis during periods of calorie or carb restriction. So, leucine and ketones may both have a protein-sparing effect, and leucine can stimulate muscle protein synthesis when insulin levels are very low. On a low-carb, ketogenic diet, you have plenty of leucine and ketones around to spare the breakdown of muscle tissue.

What Does Research Show about Muscle Hypertrophy on a Low-Carb Diet?

An article published in Nutrition and Metabolism highlights several studies on the issue. These studies show that very, low-carb diets lead to fat loss without loss of muscle tissue. In some of the studies, carb intake was as low as ten grams daily without detrimental effects on lean body mass. We know that low-carb diets have an abundance of protein, including branched-chain amino acids, that you need to turn on anabolic pathways for muscle protein synthesis. If ketones are also protein sparing, you wouldn’t anticipate the loss of muscle tissue on a low-carb diet, and if you’re strength training, you should build lean body mass as we have plenty of leucine to stimulate muscle protein synthesis.

But, What about Performance?

One concern is that a low-carbohydrate diet could reduce exercise performance Studies show that ketogenic diets don’t interfere with performance during aerobic, endurance exercise. During sustained endurance exercise, your body uses fat as the main fuel source and you become adapted to using fat as fuel on a ketogenic diet. But, having low muscle glycogen stores may impact performance during high-intensity exercise and workouts that emphasize explosive and power moves. To get around this, some people follow a “targeted ketogenic diet,” they stay on a low-carb diet most of the time but consume 25 to 50 grams of carbs before an intense workout.

As you can see, research looking at low-carb, ketogenic diets and muscle hypertrophy are limited but, based on the evidence, it doesn’t appear that a low-carb diet that contains enough protein is catabolic, as long as you’re getting enough calories.  But, that doesn’t mean a low-carb diet is right for you. Keep in mind, each of us responds to carbs a bit differently based on our individual genetics. A low-carb diet may be the most beneficial diet for someone with type 2 diabetes or insulin resistance, but if you have better insulin sensitivity, you may respond best to a moderate or even high carbohydrate diet, if the carbs you choose are whole, fiber-rich carbs. Since there’s no strong evidence that low-carb diets are superior for weight loss, you might be best served to choose a diet that’s moderate in carbs and emphasizes healthy ones.