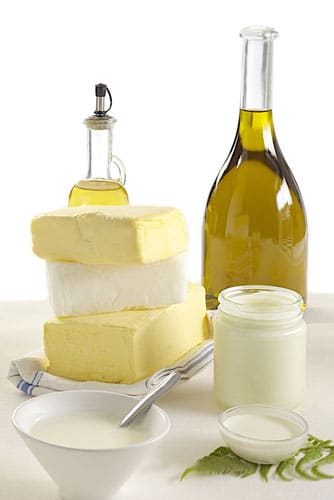 “Fat” is an unfortunate pejorative term that we’d all probably be better off without. Aside from serving no real purpose other than to make people feel bad about their body image, it also obscures the nutritional importance of dietary fats. The body needs a variety of fats on a daily basis to function properly.

If you’re looking to lose weight, cutting fat from your diet might seem like an obvious place to start. But low-fat diets have not proven to be any more effective in studies than other types of diets. Not only is some amount of fat vital to your health, but healthy fat intake is also necessary to the process of burning off the body’s fat stores.

Not all dietary fat is created equal, of course. Here’s a look at which fat should remain a part of your regular diet and which need to go.

Monounsaturated fatty acids are the one type of fat that experts on nutrition almost universally agree is healthy. Scientific testing has produced mixed results thus far, with some studies indicating they may promote insulin resistance and raise LDL (bad) cholesterol. But there’s very strong anecdotal evidence for their benefit from the traditional Mediterranean diet, which is heavy in monounsaturated fats but light in saturated fats. Countries where this diet is common show markedly reduced rates of heart disease and colon cancer when compared to European countries where saturated fat consumption makes up more of the regular diet.

The FDA doesn’t really make a distinction between types of polyunsaturated fat in that recommendation, however. Both omega-3 and omega-6 fatty acids are part of the polyunsaturated family. It has been shown in studies that an excess of omega-6 fatty acids can contribute to various diseases, but the health authorities of governments around the world can’t seem to agree on what the ideal ratio should be. The current United States recommendation is 10:1 in favor omega-6 fatty acids, but some nutritionists believe that the ideal ratio is 1:1 and that 10:1 is excessive enough to be harmful.

There’s no way to say conclusively what the best ratio is right now, and it may even vary greatly between individuals. If you’re concerned about too much omega-6 in your diet, however, taking a fish oil supplement high in omega-3s is one way to ensure balance. Omega-3 supplements only pose a potential problem if you’re already taking in a lot of them through a diet heavy in fish or flax.

Again, if you religiously follow FDA recommendations, you’ll view saturated fat as an entirely bad thing that should be limited as much as possible. But as with polyunsaturated fat, there’s a contrary line of thinking that is supported by a number of nutritionists.

Saturated fat became demonized in the 1970s with the publication of Ancel Keys’ “Seven Countries Study.” The study was undertaken to find out why middle-aged American men were so prone to heart attacks, and the conclusion was that dietary differences between different cultures were a major contributing factor. There is controversy about his methodology, however, as Keys actually studied 22 countries but excluded a number whose data would have weakened his conclusions. He also used food availability rather than actual food consumption to draw his conclusions, which doesn’t account for the considerable amount of food waste that tends to happen in wealthier countries (and thus would make the United States appear to be consuming more fat than it actually is). And he didn’t control for the relatively poor medical record-keeping of the less developed countries, making them appear to have lower rates of coronary disease.

While the actual harm that consumption of saturated fat can cause is still not totally clear, one thing that can safely be said about it is that foods high in saturated fat also tend to be very calorie-dense. So it’s probably wise to limit them for the sake of weight management, if for no other reason.

Trans fat does sometimes occur in nature in tiny amounts, but the amounts that are significant to diet are created by preparing foods with partially hydrogenated oils. While this method is great for extending shelf life, numerous studies have shown it’s also terrible for human health. The evidence is so overwhelming that they’ve already been banned in many countries and will gradually be banned in the United States (with the phase-out beginning in early 2014).

Does the Type of Fat You Eat Affect Body Composition?