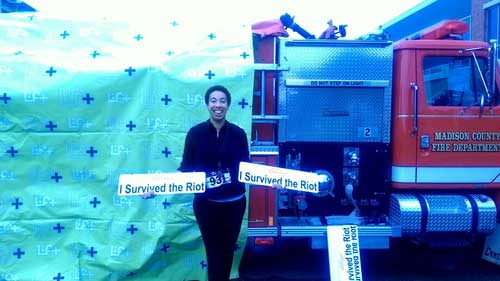 “Are you READY? Air squats are coming up, and it only gets better guys. What’s your core doing? Don’t let it hang […]. Stability ball rollouts are next. […].”

“Are you IN it today?! Work, work! How many more Cede?”
“Each tempo change brings a new response and a better result […]. You’ve got eight more singles, let’s see it! We’re feeling it too, now pull! Form is everything, train the way you want to look! Okay, this is our last set, on the heels of it is the finisher. Do you FEEL that tricep?! This is it, where is your GAME FACE?? Pull it out! You made a commitment today from start to finish, let’s go!” […]

“Phenomenal job! You earned this stretch […]. Grab lots of water, thanks for joining us
today and I will see you next workout!”

My journey as a Cathelete started September 2009 after several years of doing other workout DVDs at home and later experienced a plateau where I did not feel appropriately challenged anymore. A friend of mine highly recommended Collage Video, a company that reviewed and sold exercise DVDs, but most importantly, I could preview before buying them to avoid any undesirable surprises. As I perused through the advanced category, Cathe’s name appeared and I felt impressed by the great variety of workouts she offered (step, cardio, weights, kickboxing, etc). Although the previews looked formidable, her chiseled physique, charismatic energy, enthusiasm, no nonsense, ‘yes-you-are-really-going-to-do-this’ tough love demeanor and high fitness level of all crew members involved convinced me to try her workouts.

The first DVD I purchased was Kick Max, and boy, did I get KICKED! Even though I had exercised for years, the warm up floored me completely. It was another shock when those famous four words were uttered: “Okay, let’s move on!” Wait, there’s more? I loved the combos, but felt even more annihilated by the blast challenge drills that followed and could not even attempt them. It was official. Kick Max kicked my keester, but I was hooked and felt extremely determined to get in better shape. Afterwards, I ordered more DVDs and the five I used during my first year are: Kick Max, Butts and Guts, Cardio Core Circuit, MMA Boxing, MMA Fusion. After three and a half months, I could do Cathe’s workouts five days a week and felt extremely proud of my progress! Yet little did I know that another test of my determination loomed on the horizon.

In October 2010, I woke up one morning in horrible pain and felt extremely nauseated. On a scale of 1 to 10, the pain ranked as a 13 and it felt 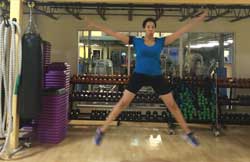 as if someone was beating me across the abdomen with a baseball bat nonstop. I was rushed to the hospital and after a battery of tests, the dilemma stemmed from a blockage in my biliary tree that also involved the gallbladder due to a faulty duct at birth and two intestinal operations as an infant. After surgery and a long recovery, I began to slowly exercise again by January 2011, but felt extremely frustrated since my core was still healing and I could not jump.

One day, I noticed a reference to Cathe dot com on the DVD packaging and decided to look through the site. Just then, the Low Impact Series was for sale and the perfect solution to assist me in getting back into shape. Therefore, Athletic Training, Afterburn, Slide and Glide became my favorites.

As I became stronger that year, Lower Body Blast, Drill Max, Low Impact Circuit, 4 Day Split, Intensity, Athletic Step and Hiit joined my collection as I began Cathe’s step workouts, which were a real adjustment since I was a complete novice to step aerobics. “V step, Repeater,
figure eight here […]. Sculpt seven, sculpt three, get down there. Straddle, let’s take this around the world again, you got it now! Now for combo three, jump on the step, jump off the side, and jump on again. A step here twice. Now a basic for three […]. You’re putting that left foot on,
now that right foot on. You look great! Now for our blast challenge […]. ”

After a while, I could step cha-cha, do hip-hop repeaters, knee-side repeaters with straddles, hitch kicks, starbursts, uneven lunges, plyo box jumps, straddle jacks and swim lunges like a pro. By summer 2011, I had acquired the stamina to do Cathe’s workouts six days per week, joined a local gym and began to weight train five days a week. This pattern continued for the next several years as other DVDs became a part of my life such as Circuit Blast, Gym Style Legs, Crossfire, To the Max, Ab Circuits and the XTRAIN series.

Unfortunately, tragedy struck during the halfway point of my 90 day XTRAIN rotation. In August 2013, I awoke to more nausea, abdominal pain and vomiting. After a lengthy hospital stay and consultations with specialists, it was determined that the same problem had recurred
three years later, which completely baffled the medical team due to my healthy lifestyle. In order to remediate it, part of an organ was removed as the only viable alternative. Although I sailed through the surgery, I experienced septic shock several days later and was rushed back to the hospital. When I regained consciousness a few days afterwards, the nurses constantly repeated how fortunate I was to even be alive. Due to the severity of the shock, I had a 105 F fever, blood pressure 82/48 and an elevated heart rate of 162 beats per minute upon arrival. As I recovered in the hospital, my medical team often inquired about my exercise and lifestyle habits, and my response was always the same: “I do Cathe Friedrich’s workouts. Go to www.cathe.com and view the clips”. The next morning, my physician visited me and before he left, mentioned that my frequent, intense exercise program with Cathe had saved my life. If I had been sedentary, I certainly would have died at the age of 30!

After my release from the hospital and a lengthy recovery that included PICC line antibiotics and physical therapy sessions, I felt well enough to attempt my DVDs by mid-January 2014. In spite of having to start over twice during the first four years due to severe illness and two surgeries, I refused to allow that to deter me from getting back in shape. I re-started with the Low Impact Series, graduated to Hiit, tried lighter, then heavier weights and modified many exercises when necessary. By late March, I began the monthly rotations, which increased my strength and endurance to the degree that I was able to return to my local gym and begin lifting again. Cardio Supersets, High Reps, High Step Challenge, Total Body Trisets, STS Total Body and eventually X10 became part of my staple workout regime. By the end of May 2014, I was strong enough to regain my six day schedule with Cathe plus weight train five days at the gym, which I felt highly grateful for then and still ascribe to the same plan even now.

This year, I was able to attend the 2015 Glassboro Road Trip and meet Cathe, her crew, staff and make friends with other Catheletes from around the globe. Not only did I have a wonderful time, it was an accomplishment to even attend considering my past medical circumstances. In regards to other milestones this year, I completed a four mile obstacle course race (Rockabilly Riot Challenge), sailed through all twelve obstacles the first time through and ran it – when I do not run at all! During the last twelve months, I also finished four STS rotations (STS and Low Impact Series, STS 3 Month Strength and Cardio, STS-Ripped with Hiit and STS-Gym Style Series). Consequently, I made phenomenal progress in strength, muscle definition, endurance, and can do pull-ups without a problem at all. ☺ When Cathe mentions the weight she uses, I’m pleased to say that I can lift the SAME weight or a bit more! Actually, I would absolutely love to audition for and join Cathe’s crew as well. ☺

As a full time Spanish professor for a local college, Cathe’s workouts are an integral part of my morning before heading to work, and time always flies once the DVD plays. Not only have I felt as if I am there in the studio since day one, the variety of workouts and premix options provide a perfect solution for days I am greatly pressed for time and only have 25, 30, 35, or 45 minutes instead of an hour. Additionally, the weekly newsletter, monthly rotations and healthy recipes convey such beneficial information regarding fitness topics, health and frequently asked questions about training and nutrition. During these six years, I have learned the importance of proper form, nutrient timing, progressive overload, periodization, 1 Rep Max, weight training for endurance, hypertrophy, strength, the five percent method, back off sets, working to failure, finisher exercises, maximum muscle recruitment, partial reps, tempo changes and so much more. Cathe, THANK YOU for your intense, no-nonsense workouts that are exceedingly thorough and leave no stone unturned as you push us to reach our maximum potential!

In closing, I write this to encourage others to exercise to the best of their ability as often as possible in spite of life’s many setbacks. Little did I know in 2009 that two major illnesses would occur to drastically alter my life at a young age, and while I have regained full health, my commitment to daily exercise has not diminished. A few of my goals for 2016 are to begin competing in fitness shows and pursue certification as a personal trainer. As a grateful Cathelete, intense physical exercise and conditioning saved my life, so I know it can do the same for everyone that reads this and fully commits to it.