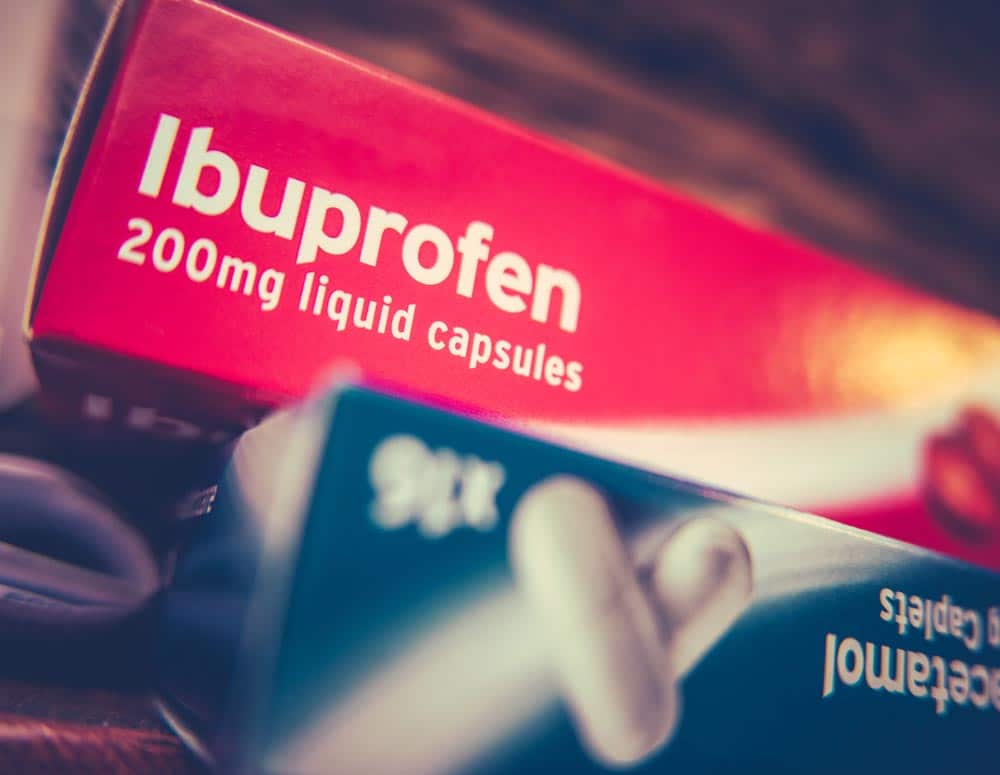 When you wake up the day after a tough workout and struggle to get out bed because your muscles are sore, it’s tempting to reach for a bottle of Ibuprofen. Ibuprofen belongs to a class of anti-inflammatory medications called non-steroidal anti-inflammatories (NSAID). Available without a prescription, NSAID is one of the medications Americans reach for most when they have muscle aches, a headache, joint pain, or a fever. Athletes, in particular, use ibuprofen for treating aches and pains related to their sport. In fact, some jokingly refer to it as “vitamin I.”

Ibuprofen, and other NSAID, work by blocking the activity of a group of enzymes called cyclooxygenase or COX enzymes, a family of enzymes that convert arachidonic acid, an omega-6 fatty acid, to inflammatory prostaglandins chemicals called prostaglandins that produce inflammation. By blocking prostaglandins, NSAID reign in the inflammatory response and ease pain.  Although ibuprofen is the NSAID you’re probably most familiar with since it’s available at drug stores under the brand names of Motrin, Advil, & others, there are a variety of other NSAID, some available only by prescription.

Can taking NSAID for muscle aches, joint aches, and post-workout pain interfere with muscle growth? In a study carried out by Swedish researchers at the Karolinska Institute, researchers recruited healthy, young adults to take part in a weight-training program. The subjects were divided into two groups. One group took 1,200 milligrams of ibuprofen daily while the other group took 75 milligrams of aspirin daily, a low dose. Over the course of eight weeks, the subjects did lower body exercises to build muscle size and strength two to three times weekly.

At the end of the eight weeks, the researchers measured various markers for muscle growth and compared muscle growth between the two groups. Surprisingly, the group taking low-dose aspirin experienced twice the gains in muscle size as those taking ibuprofen. Strength gains were also slightly less in the ibuprofen group. So, in this case, ibuprofen did seem to reduce muscle hypertrophy in these healthy subjects.

To further support this idea, studies in rats show that ibuprofen reduces muscle protein synthesis by as much as 50%. However, studies in humans are more limited and aren’t entirely consistent. In fact, in a 2011 study, researchers looked at the impact of ibuprofen on muscle and strength gains in people with knee osteoarthritis. After 12 weeks of strength training, those who took ibuprofen experienced greater gains in muscle strength than those who took a placebo, although there were no differences in muscle hypertrophy between the two groups.

To complicate the issue, the impact ibuprofen has on muscle protein may depend on factors such as the time period over which you measure, the duration you take NSAID, age, gender, and the dose. Plus, it could make a difference when you measure the impact. For example, ibuprofen may reduce muscle protein synthesis initially but not long term. In one study involving healthy, young men, ibuprofen and acetaminophen both suppressed muscle protein synthesis based on muscle samples taken 24 hours after eccentric strength training, but a follow-up to this study 3 months in duration showed that taking these analgesics actually boosted muscle hypertrophy and strength gains. So, the question is still unanswered.

Other Reasons to Avoid NSAID

Although it’s not clear whether taking NSAID after a workout is detrimental to muscle hypertrophy, non-steroidal anti-inflammatory medications have other potentially serious side effects. These commonly used medications increase the risk of bleeding from the digestive tract and there are reports of fatal bleeds from taking NSAID of all types. Plus, the symptoms often come on without warning. Ibuprofen and other NSAID also reduce blood flow to the kidneys and can interfere with the kidney’s ability to work properly. In one study among ultra-marathon runners, those who took ibuprofen before and during a race experienced a more substantial increase in blood creatinine, an indicator of stress on the kidneys and a marker of reduced function, than those who didn’t.

More recently, research shows taking NSAID, particularly some available by prescription, is linked with a higher risk of stroke and heart attack. So, despite the easy availability of these medications, you shouldn’t take them lightly or for longer than you need to. If you take them, drink enough water as doing so lower the risk of kidney problems while taking them.

There is some evidence that NSAID, like ibuprofen, and, possibly, other painkillers, including acetaminophen, interfere with muscle protein synthesis. But, we also know that NSAID have potentially serious side effects and the risk goes up the longer you take them. For that reason, be prudent with when, how, and how long you use them. An occasional ibuprofen for muscle soreness is unlikely to have a substantial impact on your muscles or your health but taking them consistently may. Just because they’re freely available without a prescription doesn’t make them safe.

Consider using natural means to reduce inflammation. Tumeric, ginger, fish oil, and garlic have modest anti-inflammatory activity and don’t have the concerning side effects that NSAID do. Plus, if you eat an anti-inflammatory diet that emphasizes whole foods and minimizes processed ones, you’ll naturally subdue inflammation and may reduce your need for medications to control inflammation.

Finally, work on your form when you weight train. Using good form reduces the risk of injury and strains, so you’re less likely to need painkillers. Vary your workouts so you’re not doing the same exercises over and over and increasing the risk of a repetitive use injury. Smart weight training and not overtraining means you’re less likely to need analgesics to control pain.

NSAID and Athletes: Why You Shouldn’t Take Them Too Often