Can Exercise Slow Down Skin Aging?

Can Exercise Slow Down Skin Aging? 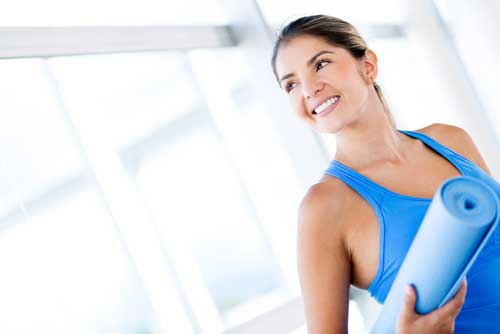 Exercise slows down the “internal” aging by improving blood vessel function, heart health and reducing inflammation, but what does it do for the part that everyone sees – your skin? The results of a new study show exercise may help keep your skin looking more youthful and help to prevent skin aging.

If you could look even deeper into the second layer of your skin called the dermis, you’d see more signs of aging. The dermis is where proteins called collagen and elastin are made. These proteins are what give your skin its firmness and resistance to wrinkling. As you age, the dermis becomes thinner and the collagen and elastin inside the dermis become more disorganized. As a result, you see wrinkles appear. Suddenly, your skin isn’t as firm as it used to be. The combination of a thinning dermis and a thickened epidermis makes skin look older.

What role does exercise play in this sequence of events? In mice specially bred to age at a faster rate, regular exercise seems to protect them against the typical signs of aging. Not only does it prevent a decline in brain and heart function, but it also keeps the mice from losing their hair or turning gray. Researchers at McMaster’s University, who conducted these experiments, wanted to extend this research to humans – to see if exercise could help human skin age more slowly.

Researchers asked a group of older volunteers (65+) to exercise at a moderate intensity by cycling or jogging 30 minutes twice a week for three months. Before beginning the exercise program, they took skin samples from the buttocks of the participants and more samples after the study was completed. Despite making no changes other than starting an exercise program, the microscopic composition of the participants’ skin had changed. Their stratum corneum was thinner and their dermis thicker, more like the skin you would see in a younger person.

Although it’s not clear how exercise affects skin aging, researchers have identified small protein muscles release in response to exercise called myokines. Myokines are released into the bloodstream during exercise and can affect sites distant from the muscle. In this study, researchers found higher levels of a specific myokine called IL-15 in the skin of participants that exercised. Myokines have hormone-like activities and may be one reason exercise protects against heart disease, type 2 diabetes, dementia and some forms of cancer. Does IL-15 protect skin against aging? It’s an intriguing but still unproven idea.

Other Ways Exercise Helps Your Skin

Exercise has other skin benefits. As Ellen Marmur, MD, professor of dermatology at Mount Sinai points out, exercise sends more blood flow and nutrients to skin cells to keep them nourished. In addition, increased blood flow removes cellular debris. Exercise helps deliver the “good stuff” and remove the “bad stuff” from your skin.

Exercise also has an anti-inflammatory effect. How so? Exercise causes adaptations that make it easier for your body to destroy free radicals that damage cells and contribute to inflammation. To get the benefits, don’t over-train. Overtraining increases inflammation by placing excess stress on your body. Inflammation also plays a role in the skin aging process, possibly by damaging collagen and elastin, the proteins in the dermis that gives skin firmness and resistance to aging.

Why Indoor Exercise is Best

The number one enemy of your skin is the sun. Sun exposure accounts for between 80 and 90% of premature aging. Exercise outdoors without sunscreen and you’ll over-ride the benefits exercise has on your skin. No sunscreen blocks 100% of the sun’s damaging rays. That’s why indoor exercise, especially during times when the sun’s rays are strongest (between 10 A.M. and 2 P.M.) is better for the health of your skin. The other thing you can do to preserve your skin is to wear a sunscreen with an SPF of 30 or greater every time you step outside, even when it’s cloudy. Damaging rays still penetrate your skin even when the sun is hidden by a halo of clouds.

You can’t completely stop the skin aging process but a healthy lifestyle and a diet rich in fruits and vegetables and moderate amounts of exercise may slow down the process. Of course, you need to avoid smoking and excessive alcohol too. Combine this with a good sunscreen and you’ll have smoother skin with fewer signs of aging. The take-home message? Don’t load up on expensive anti-wrinkle creams that might not work, put on your exercise shoes and sunscreen instead.

The Dermatologist. “Mitochondria and the Skin” September 2013.

Skin Inc. “Physiology of the Skin: Aging and Inflammation”

What Causes Saggy Skin on Your Body & Can You Correct It?

Can Eating Vegetables Make You Look Younger and More Attractive?