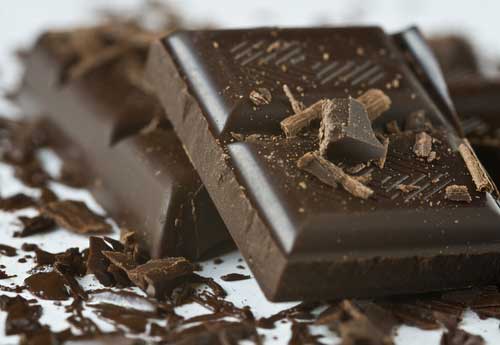 If eating dark chocolate is medicine, it’s an easy pill to swallow. Although it might be an overstatement to call dark chocolate medicine, most experts agree it’s a functional food, one that has health benefits that go beyond providing nutrients.

For example, a number of studies show eating moderate amounts of dark chocolate may lower your risk for heart disease. Now, a new study shows dark chocolate could give you an edge when you play sports or work out. Is eating dark chocolate the next ergogenic aid?

Exercise and Eating Dark Chocolate: What a Study Showed

Who doesn’t like the idea of eating dark chocolate before a workout? Researchers at Kingston University in London put the ergogenic potential of dark chocolate to the test. First, they put a group of amateur cyclists through a series of exercise tests to measure their fitness level, including their endurance.

Over the course of the study, the participants participated in cycling trials. During the tests, the researchers measured how much oxygen they used during sub-maximal exercise and how high their heart rate rose. What they found was cyclists snacking on dark chocolate on a daily basis used less oxygen during their moderate-intensity cycling workouts. Plus, they were able to cycle further during a two-minute time trial. The conclusion is that eating dark chocolate could potentially increase exercise endurance.

You might wonder what it is in dark chocolate that could explain these results. Dark chocolate contains compounds called flavanols that act as potent antioxidants. The researchers in this study believe the flavanols in dark chocolate, particularly one called epicatechin, boost production of a chemical called nitric oxide. In response to nitric oxide, blood vessels that carry oxygen to your hard-working muscles open wider, allowing more exercise-sustaining oxygen to be delivered to contracting muscles. Muscle cells can use this oxygen to make ATP sustain exercise.

Why is this important? The flavanol-induced release of nitric oxide you get after eating dark chocolate also partially explains why dark chocolate lowers the risk of heart disease. For one, nitric oxide lowers blood pressure. In addition, flavanols reduce inflammation along the inner walls of arteries and help reduce platelet “stickiness” that could lead to a heart attack or stroke. So. the three ways in which dark chocolate theoretically improves heart health are:

.   By reducing inflammation inside the walls of arteries

.   By keeping platelets from clumping together to form a clot

Now you know why dark chocolate is so heart healthy.

Dark chocolate also contains stearic acid, a type of saturated fat, as well as magnesium, a mineral that plays an important role in heart and bone health. Interestingly, some studies show low levels of magnesium impair endurance and exercise performance. Plus, when you do high-intensity exercise, your body requires more magnesium since you lose this mineral when you sweat or urinate. Therefore, athletes and physically active people may need more magnesium than a sedentary individual.

In addition, studies show magnesium deficiency is more common than previously believed. According to one study, less than half of the U.S. population consumes enough dietary magnesium. That’s concerning since you need magnesium to carry out over 300 chemical reactions in your body, including reactions involved in muscle contraction, blood pressure control, the activity of your heart, nerve function, bone health, and more.

How much magnesium is in dark chocolate? A 100-gram bar supplies almost half of the day’s recommended intake of magnesium (48%), although you probably wouldn’t want to consume that much dark chocolate daily due to the high-calorie content. Still, dark chocolate offers significant quantities of magnesium that when combined with other magnesium-rich foods like green, leafy vegetables, whole grains, and nuts can help you meet your body’s requirement for magnesium. Plus, the magnesium content of dark chocolate may partially explain why it’s heart healthy and improves exercise endurance.

Though the link between dark chocolate and exercise performance needs to be explored further, dark chocolate is a heart and blood vessel friendly snack – but choose your bar wisely. You’ll get few health benefits from eating milk chocolate since it contains lower levels of heart-healthy flavanols. Look for a dark chocolate bar that has a cocoa content of at least 70% and is low in sugar.

Unfortunately, the percentage of cocoa isn’t as reliable a measure of flavanol content as it should be. Depending upon how the dark chocolate is processed, the number of active flavanols can vary considerably from bar to bar, even with the same cocoa content. It’s particularly important to avoid chocolate labeled as Dutch processed since it has had most of its flavanols destroyed.

One brand called CocoaVia uses a special technique that preserves the flavanols. They aren’t the only ones that offer high flavanol dark chocolate bars, but you can’t tell how much flavanols you’re getting since manufacturers don’t list the flavanol content on the label – so do your research. Don’t just grab the first dark chocolate bar you see at the supermarket.

Eating dark chocolate is not only tasty but it may improve exercise endurance. Combine that with the fact that it lowers blood pressure and is heart healthy and it’s easy to see why dark chocolate is such a potent functional food. Heck, even your cardiologist won’t mind that you eat it. Just remember – if you choose a bar with a low flavanol content, you won’t get the full health benefits – and don’t overdo it. Two squares of dark chocolate are enough to give you the benefits without adding too many calories to your diet.

Are There Benefits to Eating Dark Chocolate Before a Workout?

How Much Chocolate Should You Eat for Health Reasons?