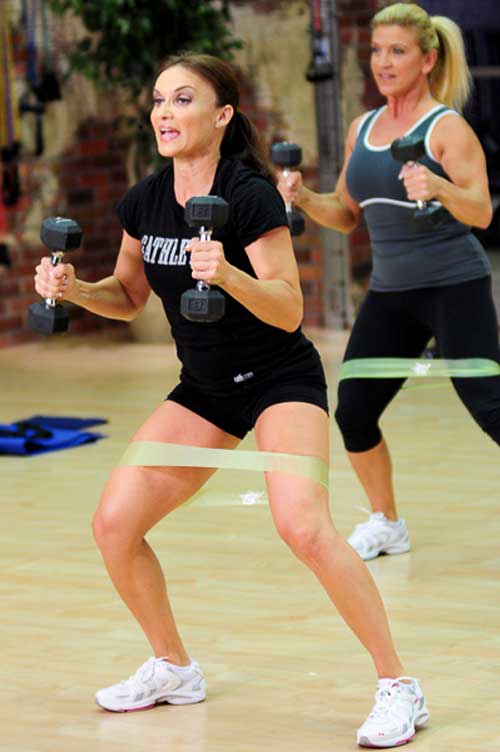 You know the feeling – the feeling that you’re simply too tired to go on? Do you automatically stop exercising when your brain screams slow down? It’s when you push yourself a little past this point that your body adapts and you’re able to maximize the fitness benefits you get. There’s a limit to how hard you can exercise but most people stop before they reach that point. The reason? Their brain tells them to stop. Your brain steps in and motivates you to stop before physiological factors like oxygen delivery becomes an issue. In other words, your mind limits your performance.

How Your Brain Deceives You during Exercise

You can do more than your brain tells you. How do we know this? Researchers at Indiana University “tricked” athletes by doing a simple test. They asked 14 competitive male cyclists to perform four time trials on cycle ergometers. One of the trials was a warm-up while the second was used to determine their baseline performance. During the testing trials, they viewed a screen that showed two avatars. One of the avatars was set to 102% of the cyclist’s baseline performance, a little over what the cyclist could normally be able to do but the researchers told the cyclist this was their baseline, what they normally did. Not realizing they were exercising harder than usual, the cyclists were able to perform at a higher level. Even after they discovered they had been “tricked,” they were still able to “overperform.” In this case, they improved by a little over 2% above their baseline.

What does this mean? It’s your gray matter that tells you to stop exercising when the going gets tough. It’s your brain’s attempt to keep you from using all of your energy stores and from overheating. Despite what your brain is telling you, there are still physiological reserves to tap into, as evidenced by the fact that the cyclists were able to push further when they were tricked by researchers. So when the going gets tough, your brain tries to slow you down before you actually HAVE to stop for physiological reasons.

How does your brain do this? It assimilates all the information it receives from your body during exercise – core body temperature, how well your blood is oxygenated and signals from your muscles. When these parameters reach a certain level, your brain signals your muscles to stop contracting. This is referred to as “central fatigue.” Your brain makes you feel like you have to stop exercising before oxygen delivery to muscle cells, the main factor that limits exercise, is compromised.

Central Fatigue – Your Brain’s Attempt to Get You to Stop

There’s evidence that a neurotransmitter called serotonin plays a role in central fatigue. Serotonin is a brain chemical linked with feelings of fatigue and sleepiness. One theory is serotonin levels build up in the brain during exercise. Eventually, serotonin levels increase to the point that you feel like you have to stop. Interestingly, a small amount of serotonin released into the central nervous system seems to have the opposite effect – it enhances muscular contractions. It’s only when serotonin levels climb too high that fatigue sets in.

What does all this mean? Your brain, as a protective mechanism, tells you to stop when things get tough. Based on the cycling experiment, you can push past those brain signals that tell you to stop, assuming you’re a conditioned athlete in good shape. That’s the “mental toughness” element of exercise. By pushing yourself a little past these signals, you’ll increase your fitness level further. Of course, you don’t want to do this if you’re experiencing real pain or if you’re just starting out, but it’s okay push past the urge to stop once you’re conditioned.

Some fitness experts advise clients to “embrace the burn.” Good advice. By not turning away from discomfort in your training, you develop mental toughness. This mental toughness carries over into ALL aspects of your fitness training. If you’re like most people, some mornings you wake up and don’t want to climb out of bed, much less do a workout. It takes mental toughness to resist the urge to hide your head under the covers and sleep through your exercise session. This is the same kind of mental discipline and fortitude that helps you eke out another strength-training rep when your muscles are burning.

How can you develop the kind of mental toughness you need to maximize your fitness level? Use the power of visual imagery to see yourself achieving your fitness goals. Visualize lifting a heavier weight in your mind for a few minutes every day. Incorporate all of your senses into your visualization. Hear the sounds around you, the feel of the weight in your hands and see yourself successfully completing a rep with beautiful form. The more realistic you can make it in your mind, the better.

When you’re doing high-intensity aerobic or plyometric exercise, keep going until your brain tells you to quit. At that point, keep going as you count to fifty. Once you get to fifty you can stop. Counting to fifty is a way to distract yourself away from the fatigue you’re feeling so you can push a little longer.

To illustrate the power of the mind, think about marathon runners. After running 26 miles, a runner turns the corner and sees the finish line. Despite the fact they feel like they can’t run another second, they break into a sprint when they see the finish line. Knowing they’re almost there, they’re able to tap into energy reserves their brain told them they didn’t have.

Your brain is there to protect you, but making greater fitness gains often means silencing that little voice that tells you that you have to stop. You can do that by pushing a little past what you think you can do, by visualizing achieving the goals you’ve set out to conquer and by developing mental toughness.

Are You Tough Enough? the Role Mindset and Mental Toughness Plays in Fitness Gains

Can Your Mind Help You Conquer Exercise Fatigue?