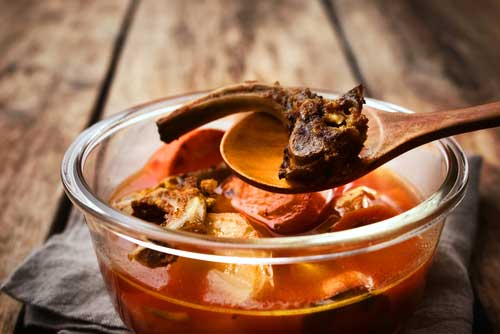 Diet trend alert – sipping bone broth is hot right now. Last year, kale was the healthy, “must have” food of the moment, but in 2015 drinking bone broth is generating buzz with some calling it the new “coffee.” Even some high-end restaurants are offering cups of bone broth for $5.00 and $6.00 a pop. You can thank the Paleo movement for popularizing bone broth. Paleo followers see it as a nutritional powerhouse – but is it really?

What is Bone Broth?

Bone broth is hardly new. Back in the olden days, when more people cooked from scratch, people prepared it from scratch at home. It’s not hard to do. Simply add animal bone to a big pot of water with two tablespoons of apple cider vinegar to draw the minerals from the bones. Then let it simmer on low heat for a full day or even longer. What emerges is a liquid concoction you can sip throughout the day. You can enhance the final product by adding bits of onion or celery to the pot and seasoning it with sea salt and spices.

As bone broth simmers in a bath of dilute vinegar, minerals are released, including calcium, magnesium, phosphorus, sulfur, silicon, and trace minerals. Yay! Another way to get dietary calcium. Not so fast. When Covance Labs in Wisconsin analyzed the calcium content of homemade bone broth, they discovered only a modest amount of calcium in bone broth – 2.31 milligrams of calcium per cup when broth was made from chicken bones and 6.14 grams when simmered with vegetables and bones. When you consider you need 1,000 to 1,200 grams of calcium daily, a cup of bone broth barely makes a dent in your calcium requirements.

While bone broth isn’t an exceptional source of calcium, it supplies another component found in bone – collagen. The soft, inner portion of bones is made up of collagen. In fact, collagen is the most plentiful protein in your body, as a component of cartilage, the lining of blood vessels, and providing support for your skin. Its collagen that gives your skin the firm scaffolding it needs to resist wrinkling and sagging.

While this may sound good, it’s not clear whether you can USE the collagen in bone broth to support bone or joint health. Since collagen is a protein, digestive enzymes in your stomach break it down into amino acids. Those amino acids then go on to build muscle proteins or other proteins throughout the body but whether they have any direct effect on joint or bone health isn’t clear. Most experts believe you can’t use collagen from food sources to build bones or revitalize joint tissue. Bone broth supplies two other components important for joint health – hyaluronic acid and chondroitin sulfate, but it’s a stretch to say bone broth is joint protective or offers benefits to people with osteoarthritis, at least until more research comes out.

It’s hard to get a handle on how much nutritional value is really in a cup of broth. For one, each person prepares bone broth a little differently. Some let it simmer longer than others and some add skin and cartilage from the animal or vegetables to the pot. These factors impact how many minerals make it into the broth. Plus, the nutritional value likely varies depending upon what type of bone you put into the pot.

One concern about bone broth is its lead content. Animals, and for that matter humans, are exposed to lead from water and food sources, and the excess lead is stored in, you guessed it, bones. When you simmer animal bones, some of this lead is released into the broth and you absorb it when you drink the liquid. One study found bone broth made from chicken bones had around 7 micrograms of lead per liter, 7 times greater than the amount in tap water. Broth made from the skin and cartilage of chickens had even more. This is still below the amount of lead the Environmental Protection Agency considers to be safe, 15 micrograms per liter.

One positive is bone broth is theoretically high in minerals, though it falls short with regards to calcium. That bone broth contains other minerals is beneficial since minerals reduce the absorption of lead.

Other Health Benefits of Bone Broth?

Some proponents of bone broth claim sipping this mineral-rich brew aids immune function. This is based on a study published in the journal Chest in 2000. This study showed chicken soup improves cold symptoms by blocking inflammation. According to research, chicken soup blocks the activity of neutrophils, a type of white blood cell that migrates to a site of infection to destroy the virus or other organisms that caused the infection. At the same time, it destroys normal tissue, leading to inflammation. Most of the symptoms you experience with a cold are related to the body’s inflammatory response and attempt to fight off the virus, not the virus itself.

Is bone broth an inflammation buster? Certainly sipping chicken soup or bone broth is soothing when you have swollen nasal passages and feel under the weather, but it’s a stretch to say bone broth has anti-inflammatory properties based on a single study.

Sipping bone broth in moderation is unlikely to be harmful, but don’t overdo it, particularly with concerns about lead. Although bone broth contains minerals, so do a variety of other foods. You can get magnesium by eating seeds, nuts, and whole grain foods. Despite the belief that bone broth is high in calcium, analysis of bone broth doesn’t support this idea. While bone broth contains collagen and hyaluronic acid, there’s no evidence you can use them to build bone or for joint support. On the plus side, bone broth is low in calories and a healthier sip than most of the canned and bottled drinks out there. But be aware, it’s premature to call bone broth a superfood.

Chris Kresser. “Bone Broth and Lead Toxicity: Should You Be Concerned?”