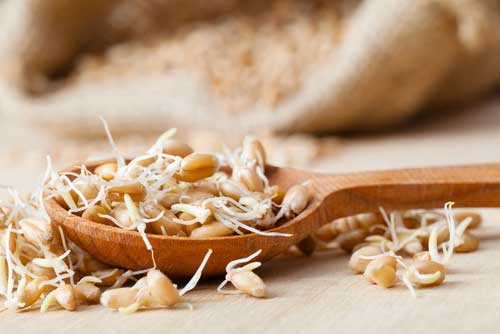 What Are Sprouted Grains?

When we speak of grains, we’re referring to the seeds of cereal grasses like oats, corn, rice, barley, and wheat. If you place these seeds under ideal conditions, the right temperature and moisture level, they’ll germinate and form small sprouts. When you see those first tiny leaves poke through the hard surface of the seed, you have a sprouted grain. To be called a sprouted grain, the sprout must be shorter in size than the seed itself. Once it grows beyond that size, it’s no longer a grain and is on its way to becoming a plant. All sprouted grains are whole grains, in contrast to refined grains where most of the fibers and vitamins has been removed.

During sprouting, enzymes are activated that turn some of the starch stored inside the side into smaller molecules that your body can more easily breakdown. As a result, sprouted grains may be easier to break down and absorb than unsprouted ones when you eat them. That’s an advantage for folks who have a hard time digesting grains.

Another way sprouted grains improve nutrient availability is by reducing the impact of a substance called phytic acid, present in mature grains. Phytic acid has the capacity to bind to minerals, like calcium, magnesium, and zinc, in the small intestine and block their absorption. Sprouted grains have less of this mineral-blocking compound. All in all, you may be absorbing more minerals as well as B vitamins from the grains you eat when you eat sprouted grains, although it’s questionable whether the difference is enough to offer significant benefits.

One of the best reasons to eat whole grains is for the fiber they contain. One study found that sprouting increased the fiber content of six varieties of brown rice. That’s important since most people fall short of meeting their fiber requirement.

Do Sprouted Grains Have More Antioxidants?

In a study carried out at Victoria University in Melbourne, Australia, researchers did an in-depth analysis of the nutrients in sprouted and unsprouted grains. What they found was sprouted rye, oats, buckwheat, sorghum, wheat, barley, and brown rice had higher levels of antioxidants and other bioactive compounds were higher in sprouted grains relative to grains with seeds that had not yet germinated.

Should You Sprout Your Own?

Because sprouted grain products are expensive, some people choose to sprout their own. While that’s not hard to do, there are some risks. To sprout a grain, you first soak the seeds in water, a process that reduces the amount of phytic acid. You then rinse them and place them in a jar that allows good airflow where you keep them warm and moist for a few days until they sprout. You can buy special jars for doing this or cover a regular jar with a layer of cheesecloth. You then invert the jar and place it at an angle so excess water can drain from the jar. Twice a day, you rinse the seeds and pour off the water, all while keeping the temperature at around 70 degrees F.  The problem is these are also conditions that promote the growth of bacteria – bacteria that can cause foodborne illness.

Even if you wash the seeds thoroughly, bacteria that cause food poisoning can still “hide” in the crevices of the seeds and multiply in the warm, humid conditions seeds need for sprouting. You can reduce the risk of bacterial contamination by cooking sprouted grains thoroughly before eating them. Don’t forget, raw sprouts of all types have been linked with numerous outbreaks of food poisoning over the years.

Sprouted grains may offer slight nutritional advantages over unsprouted ones, due to the higher bioavailability of nutrients, but the difference isn’t huge. All whole grains and seeds that are classified as whole grains are a good source of fiber, B-vitamins, magnesium, iron, and zinc. They’re also a decent source of plant-based protein.

One Green Planet. “Sprouted Grains: Are They a Healthy Choice?”

Whole Grains: Do They Have a Place in a Healthy Diet?