Are Babies and Kids With a Hearty Appetite More Likely to Become Obese?

Are Babies and Kids With a Hearty Appetite More Likely to Become Obese? 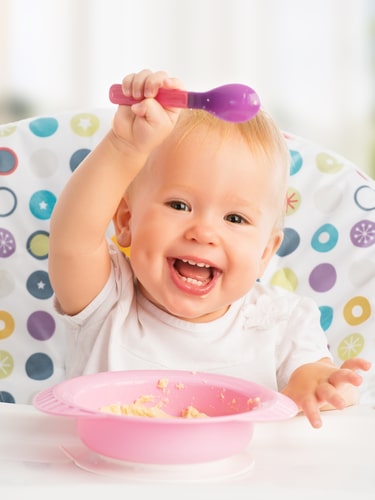 Are kids and babies with a hearty appetite more likely to end up overweight or obese? Childhood obesity is a problem of growing concern. The reality is babies and kids that are overweight or obese are more likely to be obese as adults. Plus, children and teens are increasingly developing health problems related to being overweight or obese before they even reach adulthood. Type 2 diabetes and high blood pressure were once diseases of middle-aged adults. These days’ overweight and obese children are developing these conditions before they’re even old enough to vote. No wonder childhood obesity is now an epidemic.

Because childhood obesity is such a serious problem, researchers are searching for ways to identify babies at risk for obesity early so parents can take steps to help them avoid future weight gain. Now a new study in the Journal of the American Medical Association Pediatrics finds a link between a baby’s appetite and their risk for future weight gain and obesity.

This study looked at appetite and future weight gain in 800 pairs of non-identical twins during the first year-and-a-half of life. Twins are the ideal candidates because they live and eat in the same environment. This eliminates the influence of different eating habits across families. In these twins, they measured two values – satiety responsiveness and food responsiveness using a series of questionnaires.

A second study found a low satiety response seems to be influenced by genetics. Certain gene variants are linked with difficulty getting full when eating a meal.

Obesity and Appetite: What Does This Study Show?

It’s not surprising that high responsiveness to food is linked with greater weight gain in babies and kids. Kids that are overly responsive to food cues from the environment are more likely to snack on foods that are pleasing to their senses. In most cases, their chosen snacks aren’t going to be fruits and vegetables but less healthy items higher in calories. Babies and kids with a low satiety response are likely to eat past the point where their satiety hormones kick in and are more likely to eat when they’re not hungry. Parents are often pleased that their child has a good appetite and isn’t a picky eater, but a hearty appetite and a high degree of food responsiveness could be a warning sign of future weight problems ahead.

Researchers believe information like this is useful because it helps parents identify babies at risk for being overweight or obese later on. By knowing a baby or child is at risk for obesity, parents can shape how a child responds to food by changing their environment. For example, a parent could stock only healthy items and keep less healthy treats out of sight and out of reach. They can also control portion sizes early before a child becomes accustomed to eating large amounts of food at a meal and slow down the pace of meals and feedings. Forming good eating habits as early as possible gives a child an advantage when they’re at higher risk of being overweight or obese.

According to the Harvard School of Public Health, the environment in which a child eats matters when it comes to controlling their calorie intake. They recommend:

Interestingly, research shows breastfeeding a baby longer may reduce their risk for future obesity. Babies that are breastfed appear better able to respond to satiety signals than babies that are bottle fed.

Childhood obesity is a complex issue that’s likely multifactorial – environment and genetics. This study suggests that certain early characteristics like how a baby responds to feedings and their environment may be early indicators of a higher risk of being overweight or obese.

Centers for Disease Control and Prevention. “Does Breastfeeding Reduce the Risk of Pediatric Weight Gain?”

How Birthweight Affects Your Risk for Obesity

Can We Stop the Growing Crisis of Childhood Inactivity?