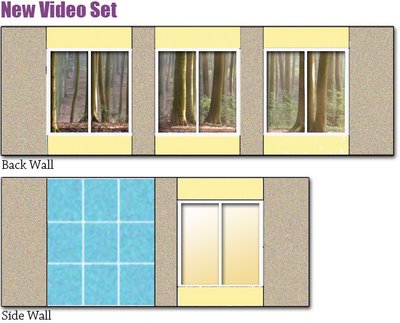 The above pictures are some initial artist sketches that were made over a year ago when we were working on the design for the new video set. We use a professional set design company that specializes in video sets for the movie and television industry. This is the same company that designed the set used in the Hardcore series.

We really liked the Hardcore series set, but it was so big that a lot of its design elements and beauty were never really seen on camera. This was especially true when Cathe and the crew were doing floor work since most of the props; i.e., large columns, statues, plants and green doors were too high in the shot to be seen. With our new set we told the designers we wanted the set to look as good during floor work as it does during standing exercises and cardio.

The new set is a classic L- shape. The back wall contains three clear windows. Behind the windows is a 12ft x 45ft giant photograph of a forest that is backlit. Thus, it will look like you’re in a room looking out into the forest. This will be the main shot you will see from the front camera.

The side camera will mainly focus on the side wall which will feature a very pretty blue square pattern with white borders. There is also a Plexiglas window that will be backlit (not sure of the color yet…lighting director will make that call) that will also be visible from the side camera occasionally. Other cameras will pick up a combination of the two walls.

The design of the new set uses colors that are pleasant to the eye and not distracting in any way. The above drawings are only 2D while the real set is 3D. Still, you should be able to at least get an idea of what the set will look like. In a little over a week you will get to see the real thing!