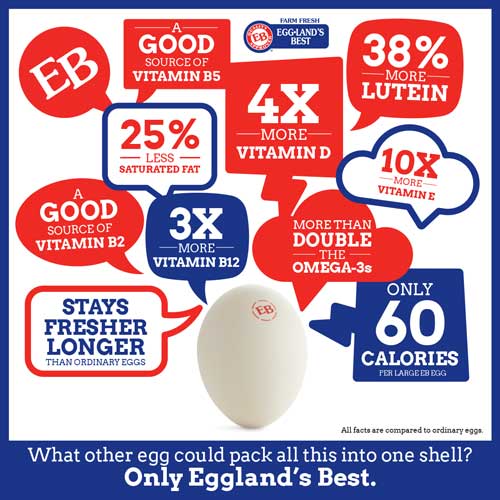 When people tell you that you shouldn’t eat an egg because it’s high in cholesterol, don’t listen to them. That’s old school thinking. In fact, an egg is loaded with nutritional value and one of the most versatile foods. Plus, with so many ways to prepare them, you’ll never get bored. Here are eight facts about eggs that might surprise you.

How about heart disease? In 2013, a meta-analysis of studies published in 2013 showed no correlation between egg consumption and incidence of stroke or heart disease. Here’s a quote from a study published in the American Journal of Clinical Nutrition:

“A decade of epidemiologic studies indicates that eggs and dietary cholesterol are not significant factors in heart disease risk.”

Also, as an article published on the Mayo Clinic website points out, the impact of eggs on cholesterol is minimal relative to the effects of trans-fat and saturated fat. Studies also don’t support the idea that eating an egg negatively affects endothelial function, the ability of blood vessels to relax. Poor endothelial function is a marker for an increased risk for stroke and heart attack.

An Egg a Good Source of Antioxidants

When you think of antioxidants, you probably think of fruits, vegetables, and whole grain foods, but eggs are a source of antioxidants too. The antioxidants in an egg are zeaxanthin and lutein, carotenoids that are important for eye health. Research shows these dietary components help prevent as well as slow the progression of cataracts and another common cause of age-related visual loss – macular degeneration. Who says you only get antioxidants from plant sources?

A Brown Egg  is No More Nutritious Than a White Egg

A common misconception is that a brown egg is more nutritious than a white egg. Not so. Different breeds of hens lay different colored eggs. According to the American Egg Board, this doesn’t impact the nutritional value of the egg. In other words, you can’t judge the nutritional benefits of an egg based on the color of its shell.

What about the inside of an egg? Ever notice how the yolk of some an egg is deeper yellow in color? The yolk color varies with the type of feed the chicken ate. If the chicken ate foods with lots of yellow pigment like corn or grass, the yolk will be deeper in color while a chicken fed grains would have a lighter yolk.

Move over beef, an egg is the highest quality source of protein. This yummy, high-protein food contains all the essential amino acids your body needs to build muscle protein and other proteins you need for health. In fact, an egg is the gold standard against which scientists compare other protein sources. How much protein is in an egg? A medium egg has around 6 grams of muscle-building protein.

Have you ever noticed the ring of green around the yolk of a hard-boiled egg? It comes from a compound called ferrous sulfide that forms when an egg is exposed to heat. You can keep it from forming by dropping the egg into cold water after boiling it and then peeling it right away. Even if ferrous sulfide forms, it’s not harmful. So, enjoy hard-boiled eggs. They’re a healthy, carry along snack.

Eggs Are a Nutritional Powerhouse

It’s not surprising that eggs are so nutritious, after all, the yolk has to contain everything a chick needs to develop. When you eat an egg, you’re getting a boatload of vitamins and minerals, including vitamin A, B vitamins, selenium, vitamin E, vitamin K, calcium, and zinc. Some eggs are enriched with additional omega-3s. Chickens raised in pastures also produce eggs higher in omega-3s.

Eggs are not only nutritionally dense, but they also rank high on the satiety scale, a measure of how filling and satisfying a particular food is.  In one study, participants ate a breakfast consisting of either eggs or bagels with a similar number of calories. When the people who ate eggs earlier ate lunch 3.5 hours later, they not only consumed fewer calories at lunch but less for the entire day.

The take-home message? If you’re trying to lose weight, skip the bagels and eat eggs for breakfast. You can get similar satiety benefits by eating only egg whites, based on one study, but miss out on all the nutrients in the yolk? It’s the yolk that houses the nutrients while egg whites contain mostly protein. Egg whites have about 5 grams of protein, 55 milligrams of sodium, and between 17 and 19 calories.

All Eggs Are Not Created Equal

You might think all eggs are the same – but they’re not! The best quality eggs come from certified vegetarian-fed hens. Raised on all natural, top-quality poultry feed, Eggland’s Best birds lay eggs that are nutritionally superior to any other. Feed ingredients such as grains, soybean meal, and flax and/or canola oils high in omega 3 fatty acids produce eggs that contain twice the amount of this essential fatty acid and may aid in reducing the risk of heart disease and strokes, obesity, and depression. Additionally, Eggland’s Best flocks are fed Biotene ® supplements containing vitamin E as well as uniquely beneficial nutrients such as sea kelp, rice bran, and alfalfa meal. Resultantly, the company has been granted a government patent for both its eggs and feed program as a cholesterol-reducing product and for production methods.

A large Eggland’s Best egg is about 60 calories, contains low levels of cholesterol (175 milligrams), and is 25% lower in saturated than ordinary eggs. For routine egg eaters, these numbers can contribute to weight loss, particularly when eaten as a replacement for other fatty meat choices. An Eggland’s Best large egg has 10 times the vitamin E of an ordinary egg and higher levels of iodine and omega 3 acids, exceeding USDA specifications. A single egg provides 10% of the USDA daily recommended amount of folate (40 milligrams) and a third of the recommended amount of choline (125 milligrams) for expectant mothers. To ensure maximum freshness, eggs are cooled and maintained at 40 to 45 degrees Fahrenheit after decontamination cleansing, grading for size, and packaging until they reach the customer. Rigorous laboratory testing validates that nutrition and sanitary standards are met as well as determines that the quality of each egg sold is exceptional.

All in all, an egg has a lot to offer. Enjoy the nutritional benefits of eggs!

Mayo Clinic. “Are chicken eggs good or bad for my cholesterol?”

How Eggland’s Best Eggs Jumpstart Your Brain and Improve Memory