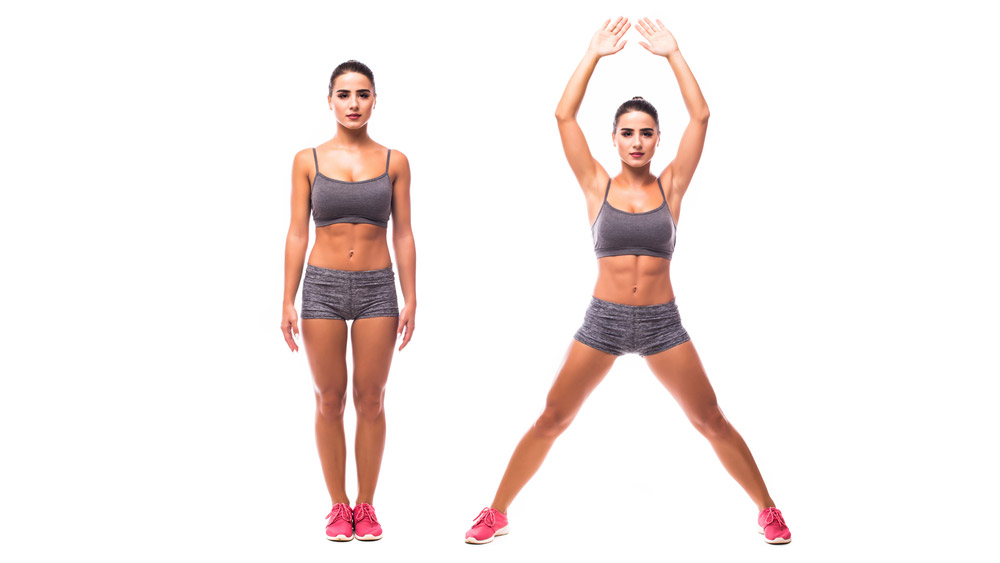 Few exercises will get your heart rate up as fast as jumping jacks. In fact, jumping jacks are an exercise that has withstood the test of time. No wonder! It’s a good cardiovascular workout and an effective exercise for warming up before a more extensive workout. But how much do you know about this popular exercise? Some of these facts about jumping jacks might surprise you.

How Jumping Jacks Got Their Name

Some sources say that the jumping jack was named after General John “Black Jack” Pershing, a World War One U.S. General. Sources say that he used the exercise to haze new recruits and make sure they were in shape for battle. However, the exercise actually gets its name from a children’s toy that performs the arm movements of a jumping jack when you pull the string. This toy looks somewhat like a puppet on a string and when you tug on the street, it raises its arms and spreads its legs jumping jack fashion. The jumping jack toy dates back thousands of years. So, the jumping jack is nothing new. These days, some people call jumping jacks by another name – star jumps, but whatever you call them, they’re an effective way to raise your heart rate and engage many muscles in your body.

There’s More Than One Type of Jumping Jack

You’re familiar with a standard jumping jack, but you can also do several jumping jack variations. If you’re just starting out, you can do half-jacks where you do the same jumping movement but only raise your arms to shoulder height instead of above your head. Half-jacks are also an effective variation if you have problems with your shoulders or are exercising in a room with a low ceiling since you don’t have to swing your arms above your head. Half jacks are also an effective warm-up exercise to raise your body temperature and get your heart rate up before tackling a HIIT or strength training session.

When you’re ready to make the exercise harder, graduate to power jacks. For this variation, you squat lower with each repetition and jump as hard and high as you can. You can also boost the intensity by increasing the speed. Challenge yourself to do a certain number in one minute. Then, increase the number of jacks as your fitness improves. You can also place a resistance band just above the knees to target your glutes more when you do jumping jacks.

We know that jumping jacks work multiple muscle groups and boost the heart rate for cardiovascular benefits, but they also enhance coordination and balance. With jumping jacks, your legs and arms have to work together in synchrony to do the movement. This teaches your legs and arms to work together more smoothly and efficiently. Coordination is important for sports and for avoiding injuries and falls.

They’re Good for Your Bones

Not all exercise improves bone density and reduces bone loss because of aging, but jumping jacks do. To stimulate bone growth requires high-impact exercise where both feet leave the ground at the same time. Jumping jacks is one of those exercises. In fact, Memorial Healthcare, sponsors a jumping jack challenge during May, Osteoporosis Awareness Month. For the challenge, you snap a photo or video of you, friends, or family doing ten jumping jacks in less than ten seconds. Then, you tag other people to do the same. It’s a great way to create awareness about the bone health benefits of jumping jacks.

They’re a Good Between Exercise Movement

It doesn’t hurt to add more cardiovascular benefits to your weight training. Jumping jacks can do that. Instead of standing around between sets, do a set of jumping jacks between a set of biceps curls or overhead presses. You’ll burn more calories and keep your heart rate up for added fitness benefits. For example, if you weigh 150 pounds, you’ll burn around 150 calories with 30 minutes of jumping jacks. Over time, the extra calorie burn will have benefits if you’re trying to slim down.

You Can Work Your Core with Jumping Jacks

A standard jumping jack is a whole- body exercise, but it doesn’t target the core muscles to a significant degree. However, you can turn a jumping jack into a core movement by doing plank jacks. To do a plank jack, get into a standard plank position with your feet together. Then, jump your feet apart and back together with the same tempo with which you do a jumping jack. Keep your body straight and don’t let your hips or torso sag. Increase the intensity of the exercise by jumping your feet apart and back together faster. Feel the burn in your core and your heart race! You’re burning calories too.

Some People Can Do Lots of Them!

Think you can beat the jumping jack world record? If so, you must do over 103 jumping jacks in a minute. A fit individual named Kapil Kumar from Indian broke the record by doing this in 2019. Or you could be like Vishal S. who, according to Record Setter, performed 84 jumping jacks while carrying a 40-pound backpack. That’s one way to get in shape and build lower body muscle and bone strength and density!

Now you know why jumping jacks are such an effective exercise. Do you include jumping jacks in your routine? If so, why not?  You can do them almost anywhere without special equipment. Plus, you can use them as a stand-alone cardiovascular exercise or include them as part of a strength training or circuit workout to keep your heart rate up. So, whether you do a standard jumping jack, a half jack or a power jack, don’t forget about this dynamic, whole-body exercise.

·        Neatorama.com. “The Jumping Jack Is Named after Its Inventor, General “Black Jack” Pershing”