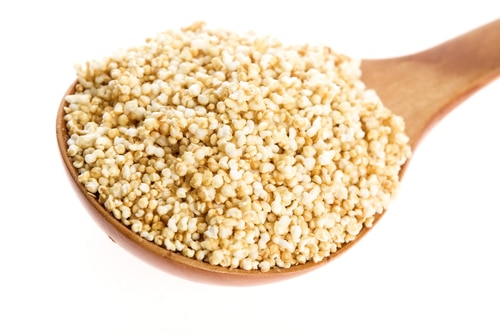 By now you already know the importance of choosing whole grains over processed grains. Whole grains retain the natural fiber and vitamins that processing strips away. Some people are surprised to learn that whole grains are an excellent source of cell-protective antioxidants. In fact, whole grains have as many antioxidants per gram as fruits and vegetables.

When you think of whole grains, some of the more common grains like brown rice and barley come to mind, but they aren’t the only option. Ancient grains are growing in popularity – grains that are thousands of years old and some of the oldest foods on earth.

What Makes Ancient Grains So Special?

Quinoa is an ancient grain you may already be familiar with. Not all ancient grains are really grains – some are seeds. Quinoa is an example of a seed that’s sometimes classified as a whole grain. Quinoa is unique among grains in that it contains all nine essential amino acids, making it a complete source of protein. It also has almost twice as much fiber as other whole grains. That makes it heart-healthy and filling. It’s also a good source of a number of vitamins and minerals including magnesium and iron.

Ready to try it? Quinoa is simple to prepare in a slow cooker. Before cooking quinoa, soak it for a few hours and discard the water. This removes saponins that give it a bitter taste. When preparing it, use a 2:1 ratio of water to quinoa. In the morning, add a little milk or milk alternative, nuts and berries for a satisfying breakfast. It’s also a good addition to soups and salads. How about quinoa pilaf instead of rice?

Fun Fact about Quinoa – Quinoa has almost twice the protein of brown or white rice.

Amaranth isn’t a true grain. It’s more like a vegetable – but it still falls into the class of ancient grains. Like quinoa, amaranth is rich in amino acids, making it a better source of protein than most whole grain foods. It’s a good source of lysine, an amino acid that’s low or absent in most whole grains. Amaranth was a food staple of the ancient Aztecs but it’s making a resurgence in modern times, although it’s not as widely available as some other ancient grains like quinoa.

You can prepare amaranth as a hot morning cereal in a crockpot. Use about 6 cups of water for every cup of amaranth. You can also mix it with other whole grains for a multi-grain hot cereal. Add it to soups, stews, and salads for extra protein and fiber. Take advantage of its nutty flavor by “popping” amaranth in a popcorn popper and enjoy high-protein “popcorn.” If you’re avoiding gluten, amaranth is a good choice since it’s gluten-free.

Fun Fact about Amaranth – In ancient Greece, amaranth was a symbol for immortality. One more reason to eat it, huh?

Before rice became a staple in Asia, millet was the grain of choice. In fact, millet is believed to be the oldest grain in history. No wonder. Millet is rich in antioxidants and an excellent source of magnesium, a mineral involved in over 300 reactions in your body. It’s especially important for heart and bone health. In addition, millet is gluten-free. That’s important if you’re trying to reduce gluten in your diet.

Like quinoa and amaranth, millet makes a tasty, antioxidant-rich hot cereal and is a good addition to soups, stews, and salads. You can also use it to replace a portion of the flour in recipes. Try browning it in a pan quickly and serving it with meat, beans or veggies. Look for millet in a variety of colors- yellow, red, white or gray.

Teff has a nutty, slightly sweet flavor. It’s a good source of protein since it contains eight of the nine essential amino acids, but it’s not a complete source since it lacks one essential amino acid. It’s also an excellent source of minerals including zinc, magnesium, and iron. Teff originates from Northeast Africa but is gaining popularity in the United States as a grain and ground as gluten-free flour found at many natural food markets.

Teff comes in two varieties – white and dark. Dark teff has a rich, slightly nutty flavor reminiscent of chocolate. Like the other ancient grains, it makes a tasty hot breakfast cereal or pilaf. It’s also a mineral-rich addition to soups and stews. When preparing teff in a slow cooker, use three cups of water for every cup of teff. Teff is an alternative to flour if you’re trying to avoid gluten but can be a bit heavy. It’s best combined with other flours to give the finished product a lighter texture.

Fun Fact about Teff – Teff is used to make the Ethiopian flatbread known as injera.

Kamut is an ancient form of wheat that originated from Egypt. Whether Kamut is more nutritious than modern wheat isn’t clear. One small study showed subjects that ate Kamut experienced a greater drop in total cholesterol and a more pronounced reduction in markers for inflammation compared to those that ate modern wheat. The subject’s blood levels of magnesium and potassium also rose more.

You can find products made with Kamut (it should say “whole Kamut” on the package) at natural food markets and grocery stores. It’s also available as Kamut flour and as kernels. Use the flour for baking and the kernels as a substitute for rice in pilafs and in soups. Kamut has a smooth, slightly buttery taste that many people prefer over modern wheat.

Fun Fact about Kamut – The name comes from the Egyptian word for wheat.

Explore the wonderful world of ancient grains and enjoy something that hasn’t changed in thousands of years. It’s a way to explore new textures and tastes and enjoy the health benefits that whole grains offer.

The World’s Healthiest Foods. “Can You Tell Me About Amaranth?”