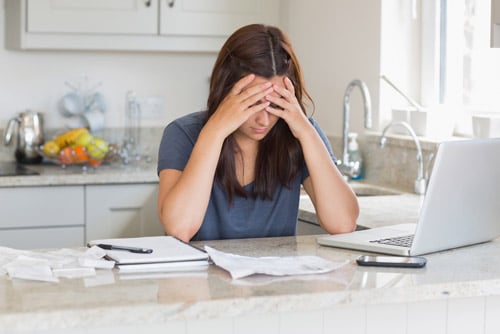 Stress – you can’t escape it. Yet, stress affects each of us a little differently. You’ve probably known people who were unfazed even when their life was seemingly falling apart. Yet others are brought down by even minor stressors. Some folks are better equipped to deal with stressful circumstances than others. In reality, there are two main types of stress and they impact your health differently. Let’s look at each.

Acute stress, as the name implies, comes on suddenly and often out of the blue. An example of acute stress is being the victim of a car accident while driving to work. Even if you aren’t seriously injured, you still feel the impact of the stress response – your heart races, your blood pressure rises, you sweat profusely, and feel a sense of panic. These symptoms come from the fight-or-flight response, your sympathetic nervous system goes into overdrive. Circulating in your bloodstream are chemicals called catecholamines, including epinephrine, norepinephrine, that heighten the sensations you’re feeling. Another hormone called cortisol is released by the adrenal cortex, a gland just above your kidneys.

The good news about acute stress is it doesn’t last long – thank goodness! Strangely enough, some research suggests that acute, short-term, stress could be beneficial. The reason? It forces your body to adapt and become stronger and more resilient. There’s actually a name for this phenomenon – it’s called hormesis.

You’ve heard people say “what doesn’t kill you makes you stronger.” Hormesis is the theory that low levels of stress increase tolerance to that stress. An example is exercise. Intense exercise ramps up your sympathetic nervous system, just as other sudden forms of stress do, but over time, your body adapts and you don’t experience the same nervous system response as you did in the beginning. Plus, you enjoy the other health benefits that exercise offers.

Chronic stress is a different animal. This is ongoing, unrelenting stress. With chronic stress, you get catecholamine release but cortisol is the hormone that predominates. Partially due to the effect of cortisol, chronic stress carries the greatest risk of health problems. Research shows that chronic, ongoing stress is linked with an increase in inflammatory markers, markers that indicate your body is inflamed. As you may know, low-grade inflammation is linked with cardiovascular disease, type 2 diabetes, autoimmune disorders, depression, weight gain, and cancer.

Now you know why chronic stress places your health at risk. In fact, it throws your entire system out of whack – your blood pressure rises and your blood sugar goes up. Although you feel the effects of being “stressed out”, you’re unaware of the silent damage that’s going on to the cells, tissues, and blood vessels in your body. Your body simply isn’t equipped to deal with chronic stress.

What’s interesting is chronic stress early in life can manifest as health problems many years later. A recent study carried out by researchers at the Mayo Clinic found that children who were bullied during childhood were at higher risk of heart disease and diabetes as adults. That’s why it’s important to deal with ongoing stress, the earlier the better.

We think of stress as a bad thing. After all, who wants to deal with a car accident or being pulled over for speeding? However, a limited amount of acute stress may actually be good for you. For example, a heart-thumping, sweaty workout improves your health. Exercise is a short-term stressor that leads to long-term improvements in fitness. This may be true for other forms of stress. Some research suggests that short-term exposure to cold and periods of fasting is a hormetic stimulus that promotes beneficial adaptations.

When researchers at UC Berkeley exposed mice to periods of short-term stress, in a variety of forms, their cortisol level shot up but it also led to new brain cells in the hippocampus, a part of the brain involved in memory and learning. The mice also performed better on memory tests after exposure to short-term stress. Interestingly, the improvements in memory didn’t show up immediately. It took two weeks for the brain changes to appear.

Of course, this raises questions. What’s the stress “sweet spot?” Research shows humans and animals exhibit a biphasic response to stressors. Low or short-term exposures to stressors induce a favorable response, as with exercise. High-intensity interval training is an example. Vigorous exercise is taxing on the body but, in moderate doses, it creates positive adaptations.

However, if you do a HIIT workout twice a day every day, your body will likely suffer the effects of overtraining or even injury. We now know that intense exercise induces oxidative stress, but in moderate doses, it activates the body’s internal antioxidant defense system, another example of temporary stress causing positive adaptations that are conducive to health.

The factor that differentiates “good” stress from bad stress is dose and duration. Your body has a threshold beyond which stress, regardless of its duration, is damaging. For example, some studies show that short-term exposure to heat, like sitting in a sauna, may induce positive adaptations. However, if you turn the heat up too high, it’s no longer therapeutic.

Duration matters too. Exercise is a positive stressor in controlled doses but if you run an ultramarathon, you could overwhelm your body’s ability to adapt and end up injured or exhausted. Mild to moderate stress that’s short in duration can be adaptive but if sustained, it becomes potentially harmful. What are the consequences?

Humans and animals exposed to chronic stress, release higher levels of catecholamines and cortisol. Over time, the adrenal glands become fatigued from overproducing cortisol and chronic inflammation develops, leading to an increased risk of heart disease and hypertension. Plus, studies show that chronic stress is linked with shortening of telomeres, the end caps that keep chromosomes from coming apart as they replicate. Shortened telomeres are associated with an increased risk of chronic disease and a reduced lifespan. So, long-term stress can kill you.

It’s by stressing your body that it adapts and becomes stronger. It’s long-term stress that poses the greatest risk to your health. That’s why it’s important to have strategies in place to manage ongoing stress, whether it be yoga, meditation, or deep breathing exercises. Exercise, itself, is a stressor that can make your body more resilient & less subject to the damaging effects of chronic stress. Plus, it’s a stress reliever. So, keep on lacing up those exercise shoes!

What Impact Does Exercise Have On Sleep Insomnia?