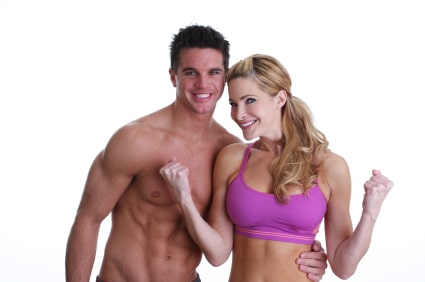 Belly fat is a common problem and one that “grows” with age. Subcutaneous belly fat, the kind that lies just beneath your skin and jiggles, makes it hard to button your pants, but it’s less likely to lead to serious health problems. Visceral fat, the kind that lies deep within your abdominal cavity is more likely to cause health issues such as type 2 diabetes and heart disease.

Not surprisingly, diet plays a role in how much abdominal fat you carry around. According to recent research, you can reduce the amount of belly fat you have by increasing the quantities of two components in your diet – protein and fiber.
In a study published in the European Journal of Clinical Nutrition, researchers found that obese women who got at least 35 grams of fiber in their diet daily and consumed 30% of their total calories in the form of protein lost more weight and belly fat. They also had healthier lipid levels.
Most Americans aren’t deficient in protein, but the majority aren’t getting enough fiber in their diet. Most don’t even get 15 grams of fiber a day, much less 35 grams. Are they carrying around excess tummy fat as a result?

Fiber helps to control belly fat in several ways. Foods rich in soluble-fiber are more filling. When they’re exposed to water in the intestines, they form a gelatinous mass that expands and increases satiety. They also reduce the insulin spike that occurs after a meal that’s high in carbohydrates. Insulin is a hormone that promotes fat storage in places like the tummy. Dietary fiber also reduces dietary fat absorption from the intestines. This means some of the calories from fat are excreted instead of absorbed. A high-fiber diet has the added benefit of helping to lower LDL cholesterol levels.

A Higher Protein Diet Helps Too

Protein is another ally in the battle against obesity. Research shows that higher protein diets help with appetite control. The amino acids in protein foods when they’re broken down send a signal to the hypothalamus in the brain to reduce hunger. Like fiber, protein also blunts the insulin response that occurs with a meal.
Many people get enough protein in their diet already. The key is to eat small quantities of lean protein several times a day to reduce appetite and calorie consumption. Foods like lean fish and poultry and low-calorie vegetarian sources of protein work well for this. Beans and lentils are another good choice since they contain protein and are an excellent source of fiber.

The bottom line? If you’re concerned about belly fat, increase the amount of soluble fiber in your diet by eating more fruits and vegetables and moderate amounts of whole grains. It could make it easier to buckle your belt.