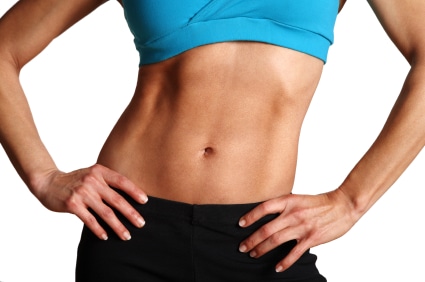 Which weighs more, twenty pounds of muscle or twenty pounds of fat? They weigh the same, right? Now consider which looks better on the female body. Most people would agree that a lean, muscular physique is much more attractive than one that is soft and flabby. How can women achieve a toned body and eliminate ugly body fat? The answer may surprise many people. Resistance training, particularly exercises that include heavy weights, is one of the quickest and most effective ways to tighten a woman’s physique and reduce body fat.

Some women believe that performing resistance exercises with heavy weights will make them look bulky and masculine. In fact, the existence of developed muscles is what gives the appearance of a toned, defined body. Also, heavy weight lifting results in a caloric expenditure that can be greater than what is typically attributed to cardiovascular and aerobic exercise. Dr. Frederick C. Hatfield, Ph.D., noted in published literature that weight training in general burns an average of 500 calories per hour compared to 300 calories burned while bicycling at five miles per hour for sixty minutes.

How is it possible that a sedentary woman with very little muscle tissue can look drastically different than an athletic woman that has a muscular physique even though they are the exactly the same height and weight? The reason is that muscle is very dense and it takes up far less room than fat does. According to a study conducted by the Gerontological Society of America, human muscle density is 1.06 g/ml and fat density is approximately 0.09 g/ml. Thus, one liter of fat weighs about 0.9 kg. and one liter of muscle weighs 1.06 kg. Simply stated, human muscle tissue is approximately 18% denser than fat tissue.

As a general rule, it takes a surplus of about 3500 consumed calories to gain one pound of fat according to the Mayo Clinic. Likewise, a caloric deficit of 3500 calories results in the loss of one pound of body fat. In simpler terms, if a person consumes more calories than are burned, body fat will accumulate. Women must remember that it is not heavy weight lifting that will lead to large thighs, hips and arms; it is body fat accumulation that results from overeating.

According to Dr. Frederick Hatfield, a person’s basal metabolic rate, or BMR, is a measure of energy expended for normal repair, maintenance, and function of the human body while lying down and resting. While there are several factors that influence a person’s BMR, Hatfield cites an example of the average bodybuilder, who generally has a higher resting metabolism than the average sedentary person as a result of possessing a greater quantity of muscle mass. Additionally, Hatfield explains that the human body continues to burn calories for several hours after engaging in moderate intensity exercise, such as weight lifting. Though few women seek to achieve the physique and muscle mass of a bodybuilder, the example that Hatfield presented demonstrates how profoundly the existence of muscle tissue influences a person’s resting metabolism. When the metabolism is elevated, body fat loss is expedited and energy levels are increased.

Women who initiate a workout program that incorporates the use of heavy weight lifting typically experience an immediate, noticeable change in their weight and body composition. The reason for this is twofold; an increase in lean muscle tissue and a decrease in stored body fat. Upon beginning a weight lifting routine, a woman’s metabolism gets a quick boost to accommodate the muscle recovery process that is associated with heavy resistance training. As Dr. Frederick Hatfield noted, the metabolism is elevated for several hours following moderate intensity exercise and results in a caloric expenditure that occurs during muscle cell repair. The result is a measurable loss of body fat in a relatively short period of time. A woman who is not accustomed to heavy weight lifting may immediately experience the development of muscular definition and a tightening of the abdominal muscles. When her abdominal muscles tighten, her waist feels harder and appears slimmer and smaller. As the woman continues a weight lifting program that incorporates progressive resistance, her body will continue to become more toned and her metabolism will continue to increase, resulting in a sustained reduction of body fat.

According to the National Strength and Conditioning Association, water makes up approximately 50% of a woman’s body. Much of that water is stored and circulated through muscle tissue, which contains about 70% water. When the amount of muscle tissue is increased, the total volume of water within a woman’s body is increased. However, in this case, the weight gained from an increase in water storage and circulation is considered to be lean weight, as it does not affect the amount of or appearance of body fat. The distinction must be made between what is commonly known as “water retention” and the phenomenon of intracellular hydration. Intracellular hydration occurs when water is contained within the muscles for the purposes of shuttling nutrients and toxins in and out of its cells. The term “water retention” generally refers to water that is stored under the skin, which can result in a fat, bloated appearance.

Achieving a toned, lean physique is not the only benefit that women can experience as a result of heavy weight lifting. There are many health benefits that are associated with resistance training that can help a woman look and feel younger, prevent disease and even increase life expectancy. For example, the National Strength and Conditioning Association published that “activities that stimulate muscle hypertrophy and strength gains also appear to stimulate the growth of bone and associated connective tissue.” Basically, weight lifting increases the size and strength of muscles which results in increased bone density and tendon integrity. This is especially important for women who potentially face the bone decaying disease of osteoporosis.

Women who have the desire to achieve a toned physique, feel and look younger, and live longer should strongly consider implementing an exercise program that incorporates the use of heavy weight lifting. The unique dynamic of resistance training can result in immediate and long term health benefits that cannot be achieved through traditional aerobic exercise.

4 Components of Fitness that Are Vital for Healthy Aging