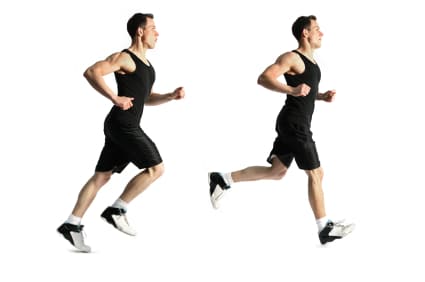 Are you a runner or a jogger? There’s a world of difference between running and jogging. Most people who “run” are actually jogging. The average jogger moves their feet at a pace of between 5 and 5.5 miles per hours. There is no exact consensus on when a jog becomes a run, but most sources say you’re running when you reach a speed of 6.0 miles per hour, the equivalent of a 10-minute mile.

Health Benefits of Running and Jogging

Whether you choose to jog or increase the speed and break into a run, you’re getting health benefits. Jogging and running help your heart pump more efficiently. Both activities raise levels of HDL cholesterol, the good cholesterol that protects against heart disease.

Running and jogging are excellent calorie-burners, especially when you pick up the pace and run. The high-impact nature of running and jogging makes it good for boosting bone density. It’s a particularly good sport for women since they’re most predisposed to osteoporosis.

Contrary to popular belief, running and jogging aren’t bad for your knees. A study carried out at Stanford University followed 1,000 runners for over 20 years. It found that runners have no greater risk of osteoarthritis of the knee than non-runners. Plus, runners enjoy a 39% lower mortality rate.

Running and jogging have mental health benefits too. All of the endorphin release that triggers the “runner’s high” helps to relieve stress and anxiety and improve symptoms of depression. Running and jogging are good for both body and mind.

Running or Jogging: Which is Better?

Jogging may sound like a better alternative. After all, it’s physically less demanding than running, and almost anyone can do it. It’s certainly more challenging to pick up the speed and break into a full run, and you can’t do it as long without becoming fatigued. That’s why you see more people jogging than running or sprinting down the street.

The problem with jogging is you don’t get the same boost in fat-burning hormones you get when you run or sprint. Higher intensity exercise like fast running or sprinting increases levels of growth hormone, a hormone that promotes fat-burning.

You also get the “after-burn” effect when you run or break into a sprint. This means your body will burn more calories for hours after you stop exercising. You don’t have to run for long to get the benefits either. If you pick up the speed, you can get a cardiovascular, fat-burning workout in 20 minutes. It’s one of the most effective forms of brief exercise there is.

Jogging for longer distances puts more strain on your muscles, tendons, and joints, and it’s easy to end up with overuse injuries like Achilles tendonitis, shin splints, and even stress fractures. Plus, when you jog long distances, your body releases greater amounts of the stress hormone cortisol. Cortisol stimulates muscle breakdown, and it contributes to visceral belly fat, the dangerous kind of fat that lies deep within your abdominal cavity. Just look at a sprinter’s body. They have toned, muscular bodies, while long-distance runners who often lack muscle definition and may even look emaciated.

How to Get the Additional Benefits of Running

Instead of jogging for an hour, pick up the speed, and run for 20 minutes. Do this once a week to challenge your body. If you’re not ready to run for 20 minutes, use fartlek interval training to do short sprints. Start out jogging. At intervals, choose an object in the distance to focus on such as a mailbox. Break into a fast run until you reach the mailbox. Once there, slow down to a jog. Repeat these intervals throughout your workout. If you’ve reached a weight loss plateau, this is a good way to break out of it. Plus, you’ll develop speed.

Running and jogging both have health advantages, but you’ll get additional benefits by adding some speed work to your jogging routine. One day a week, pick up the intensity by running or using fartlek interval training. Your body will respond to the challenge in a positive way.

Time Health. “Is Running Bad for Your Knees?”
On Fitness. September/October 2011. page 15.

Knee Pain: Could It Be Jumper’s Knee?

One thought on “Running Versus Jogging: How Adding a Little Speed Work Can Help”