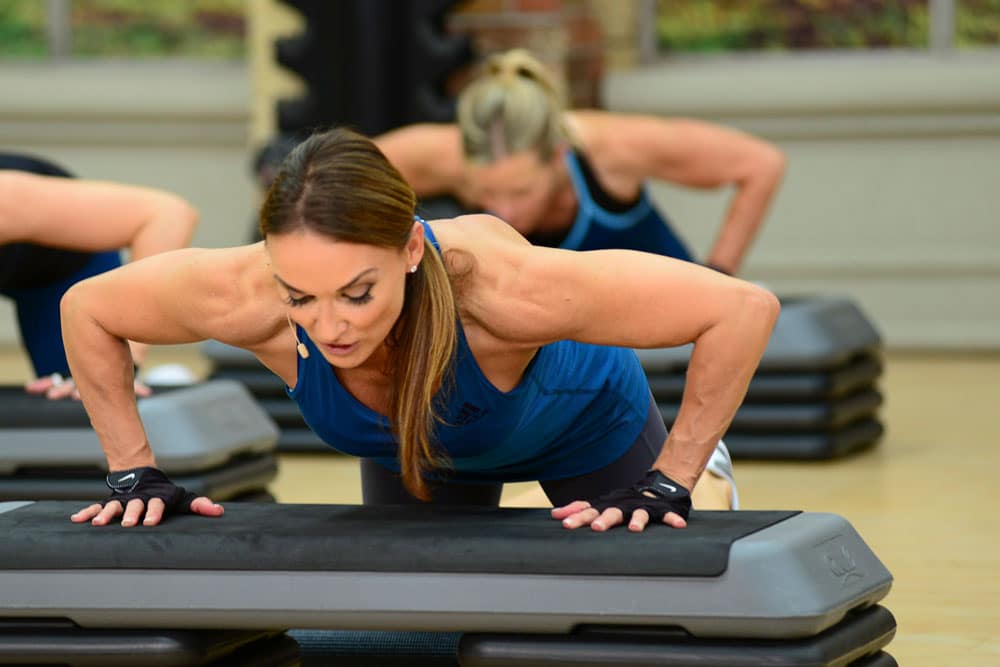 Push-ups are one of the most popular bodyweight exercises and one that works multiple muscle groups simultaneously. While we characteristically think of push-ups as a triceps exercise, pushing your body weight off the floor also works your biceps, pecs, deltoids, and muscles in your back, including the trapezius and deltoids. Who wouldn’t love an exercise that does so much?

Push-ups also have many variations. One of the easiest ways to modify a push-up is to change the position of your hands. For a standard push-up, you place your hands at shoulder level, taking care not to let your elbows flare outward when you lower your body. Fingers face forward and slightly splayed. If you haven’t developed a baseline level of strength, you can approach push-ups initially with your knees on the floor and gradually work up to doing them on your toes.

Moving your hands closer together to about 50% of the width of your shoulders switches the focus of a push-up more toward your triceps, at least that’s what most trainers will tell you. In contrast, the thought is that a wide stance placing your hands more than shoulder width apart emphasizes the pectoral muscles more. However, a study published in the Journal of Strength and Conditioning Research calls this idea into question. In fact, the narrow hand stance push-up may be the most effective variation to activate the pecs and triceps.

How to do a narrow grip push-up? Place your hands about 50% of shoulder length. Focus on keeping your elbows tight by your side as you move up and down. No flailing elbows! Also, don’t internally rotate your hands when you do this move. A narrow grip push-up places more stress on your elbows relative to using a wider hand stance, especially if you internally rotate your hands. Once narrow-grip push-ups become easy, elevate your feet on a bench or other incline to increase the challenge.

Wide stance push-ups may not activate the pecs more than a narrow stance, but it’s still a way to vary the stimulus you place on your muscles. Plus, a 2016 study published in The Journal of Physical Therapy Science found that using a wide-grip boosts biceps activation by 20%. To do this variation, place your hands a few inches wider than shoulder-width apart. Inhale as you lower your body and exhale as you come back up. You’ll feel this variation more in your shoulders than with a traditional or narrow stance push-up.

Another way to change your hand position to target muscles differently is to perform low or high push-ups. As discussed on the Stack.com website, a high push-up is where you place your hands higher up on your body frame. A 2005 study found that when subjects did high push-ups where their hands were placed 30% higher than the length of their arms (relative to a standard push-up, it increased triceps activation by 11% and pectoralis major activation by 8% relative to a standard push-up.

In contrast, a low push-up is where you place your hands lower on your body frame. In the same study, subjects placed their hands lower than the placement for a standard push-up. Again, the distance was measured relative to their arm length and was 30% lower than the length of their arms. This hand positioning hit the pectoralis major 25% harder and the biceps 15% harder relative to a standard push-up. So, moving your hands up or down relative to your body can increase muscle activation. Low push-ups are a good choice if you want to blast your pecs.

Another way to increase the challenge is to place your hands on a Swiss ball when you do push-ups. Using this approach targets your core more and adds a balance challenge. This is an advanced move, so master your form on the floor before adding this variation.

As you already know, elevating your hands on a bench or table makes push-ups easier while placing your hands lower than your feet increases the challenge. When you first started doing push-ups, you may have placed your hands on a bench to make the move easier until you built up enough strength to do a standard push-up. Once standard push-ups become easy, you can make it harder by elevating your feet.

Now, you have a better idea of how the position of your hands affects the difficulty of push-ups and the degree of activation of each muscle group. You can use this to shift the emphasis of the movement to work your chest or triceps harder. Whichever version of push-ups you do, it’s a super upper-body exercise!

Which Push-Up Variation is Toughest?

2 thoughts on “Push-Ups: How Hand Position Changes the Muscles You Work”